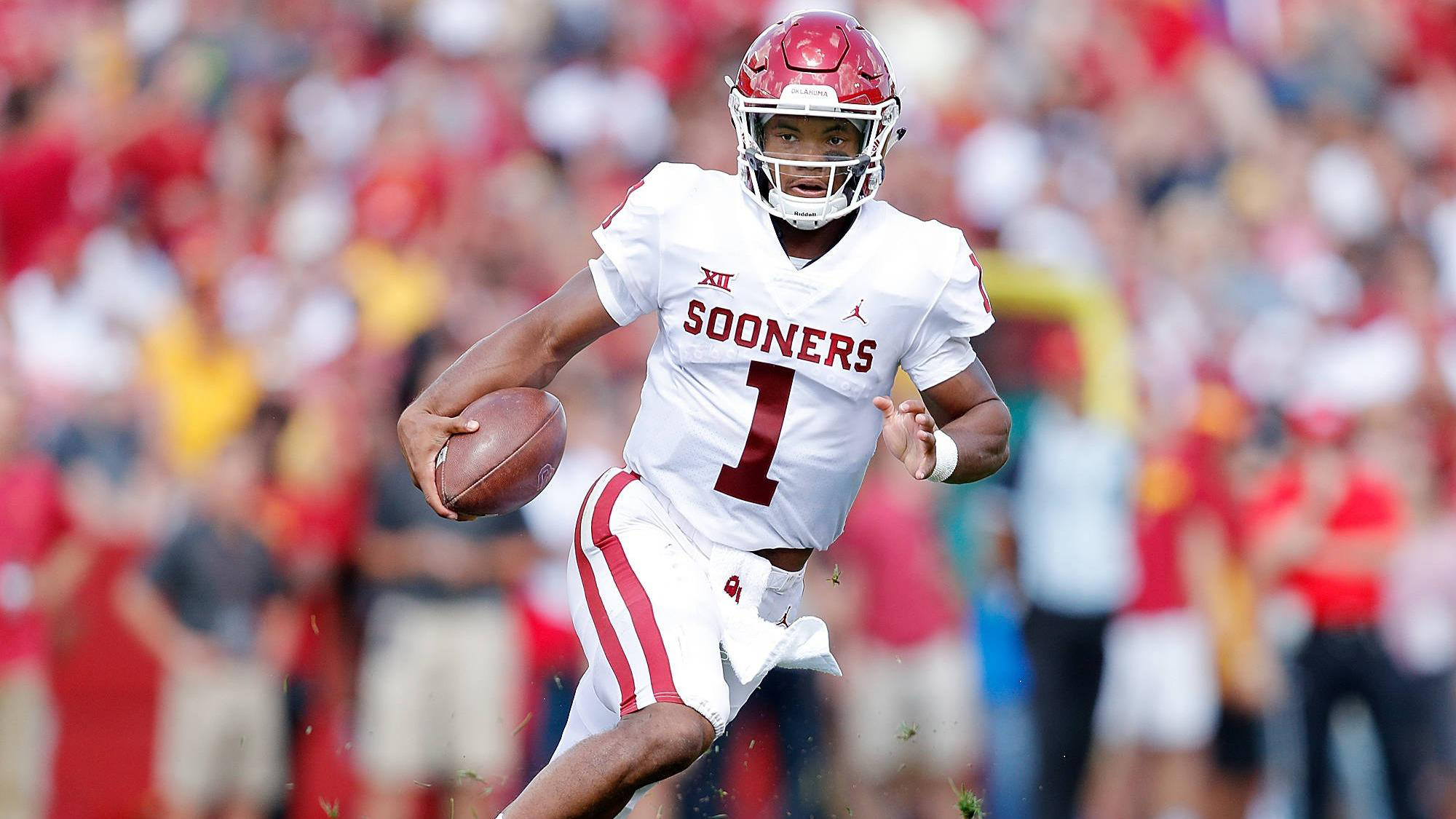 Oklahoma quarterback Kyler Murray is an extraordinary dual threat who is completing more than 70 percent of his passes, but when he gets into the open field as a runner, he is as dangerous as any quarterback in the country (photo courtesy of soonersports.com).

DALLAS, Texas — Saturday’s AT&T Red River Showdown against Oklahoma is one of those games that doesn’t resemble many others. It’s not like the coaches on either side have to find ways through which to motivate their players to muster a top effort in the Cotton Bowl. Texas coach Tom Herman and Oklahoma coach Lincoln Riley probably could stand up in the locker room before the game, simply name the other team across the field and watch their players scramble through the door like they only have one chance at a final meal, or perhaps a winning lottery ticket.

But motivation isn’t the issue in this game. Texas-OU is more about strategy and execution. So what can the Longhorns do in order to take down the Sooners?

Force Kyler Murray to give up the ball
This is not to suggest that the Longhorns want Murray to stand in the pocket, unchallenged. After all, he has completed 70.6 percent of his passes this season, hitting on 7 of 109 attempts for 1,460 yards, and he has a ridiculous ratio of 17 touchdowns against just two interceptions.

But it’s as a runner that Murray is simply lethal for opposing defenses. After the Sooners hammered Baylor, 66-33, Riley stopped short of calling Murray the best running quarterback he has seen, but it sounded like he considered it.

“I’m always scared to say ‘best I’ve ever seen’ — we’ve seen some pretty good ones — but it was pretty damn good,” Riley said. “He’s just got that gear, acceleration-wise, and he can continue to get more aggressive running it and involved in our run game because people just have to account for him, and even when you account for him, the odds still aren’t in your favor, and that’s just one of the things that makes him really good. Right now, what makes him good, though, is he’s beating people from the pocket, and if he can do that, he’s tough to handle.”

There’s a risk to this approach, of course, and that is the fact that many of the Sooners’ skill position players are dangerous, as well. But Murray is another level of dangerous. The Longhorns need to force him to give up the ball and take their chances with the other OU weapons.

Then there’s ‘the other Murray’
The play of the offensive line is important every week in every game, of course, but against Oklahoma (5-0-0 overall, 2-0 against Big 12 teams), it will be critical. Linebackers Kenneth Murray and Curtis Bolton might well be the best pair at the position in the country. Murray has 64 tackles and three sacks, while Bolton has 62 tackles and 1.5 sacks. Those are decent numbers for a season, and these two have put up those numbers in five games.

It’s not like the Sooners run a bunch of exotic schemes to hide Murray and Bolton and make blockers lose track of them. Instead, the terrible twosome will line up in mostly traditional looks and dare opposing teams to stop them. They are outstanding against the run, ran rush the passer and drop into coverage. Both are drawing massive praise in the early part of the season, and rightly so; Murray already is being compared to the best linebackers in Oklahoma history.

Aim high
Texas wide receiver Collin Johnson has the physical gifts and ability to create mismatch nightmares for any defense in the country. He has the speed to run away from linebackers and safeties, and at 6-6, the size to physically overwhelm cornerbacks. He has 24 receptions (two shy of the team lead) for 350 yards and three touchdowns, and his value is increased because of the attention he draws away from teammates by demanding double-teams.

But Johnson is such a rare athlete that the Longhorns can afford to ask even more of him. OU cornerbacks Tre Norwood and Parnell Motley have decent size (5-11, 179, and 6-0, 177, respectively) and speed, but Johnson can run with them and towers over them, physically. Johnson should be fed the ball more and more until someone shows a method for stopping him.

Keep the ball
It’s a cliché that gets overused, but in this case, it’s critical. The idea of slowing a game down by grinding out long, methodical drives can be a bit misleading — after all, a 90-yard touchdown pass is worth just as many points as a quarterback sneak from a yard out at the end of a 14-play drive.

But ball control will limit the opportunities for the high-octane OU offense. Limit the number of times Murray can take his gang out on the field — the Sooners are averaging 48.6 points per game, the No. 8 average in the country among FBS teams and nearly 20 points more than Texas is averaging (28.8 points per game).

This is a game in which the Longhorns have to hope they never need to punt and don’t have to use a kicker except for extra points and kickoffs. If Texas settles for field goals, or punts the ball back to the Sooners too often, the potent OU offense could make it a long day for the Longhorns. Instead, Texas needs to shorten the game by working through extended drives, hope the defense can stop the Sooners, or better yet, force turnovers, and avoid a high-scoring shootout.

This game is very winnable for a Texas team that has won four straight, and a Longhorn victory would change the tone of the entire season. But the gameplan has to be sound so the Longhorns can create optimal matchups and circumstances needed to be effective.