CONFIDENCE IS THE KEY WORD 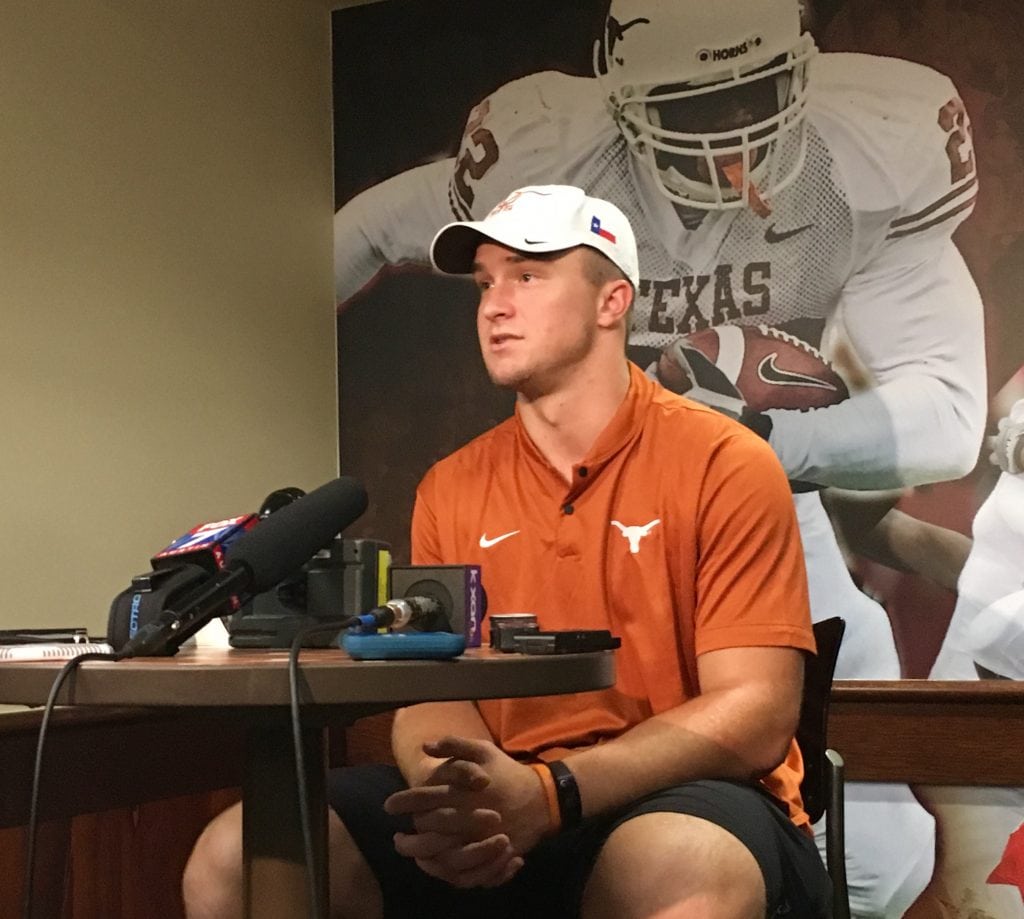 Sam Ehlinger met with the media on the Forty Acres this week.

From Sam Ehlinger to Kris Boyd, the key Texas Football players speaking to the media at L. Theo Bellmont Hall on the Forty Acres Tuesday all focused on one crucial element — confidence.

When Horns Illustrated asked Ehlinger what confidence means to him, the sophomore quarterback smiled wide and thought for a moment before answering.

"No hesitancy. I think when you have a substantial amount of confidence in what you’re doing and playing the game, you don’t think," Ehlinger said. "That might have been part of the problem in certain situations in the past for us, is everyone was evaluating and thinking instead of just putting their foot in the ground and just going."

The confident quarterback added, "When you have confidence you don’t really hesitate because, hey, if you miss a play you still got your confidence in yourself. "

Check back throughout the week for more from the Texas players and coaches heading into the Big 12 Conference opener against TCU Saturday at DKR-Texas Memorial Stadium.

STRONG SUPPORT FOR ALL THE HORNS

Mo Bamba, Vince Young, Matthew McConaughey, the big-name Horns were all at the Texas Football game last week. They were easy to spot on the sidelines and on TV.
That’s just the half of it though when it comes to Burnt Orange support from the inside.
Half of the sports squads on campus went to the huge Texas vs. Stanford volleyball match it seemed like. Every game on the Forty Acres features support from adoring fans along with the familial boost from seeing fellow Horns in the stands.
The women’s basketball team and soccer team were at the volleyball match, and the volleyball squad — among many others — were in attendance to see the Texas football team take down visiting USC, which we’ve all come to know and hate. 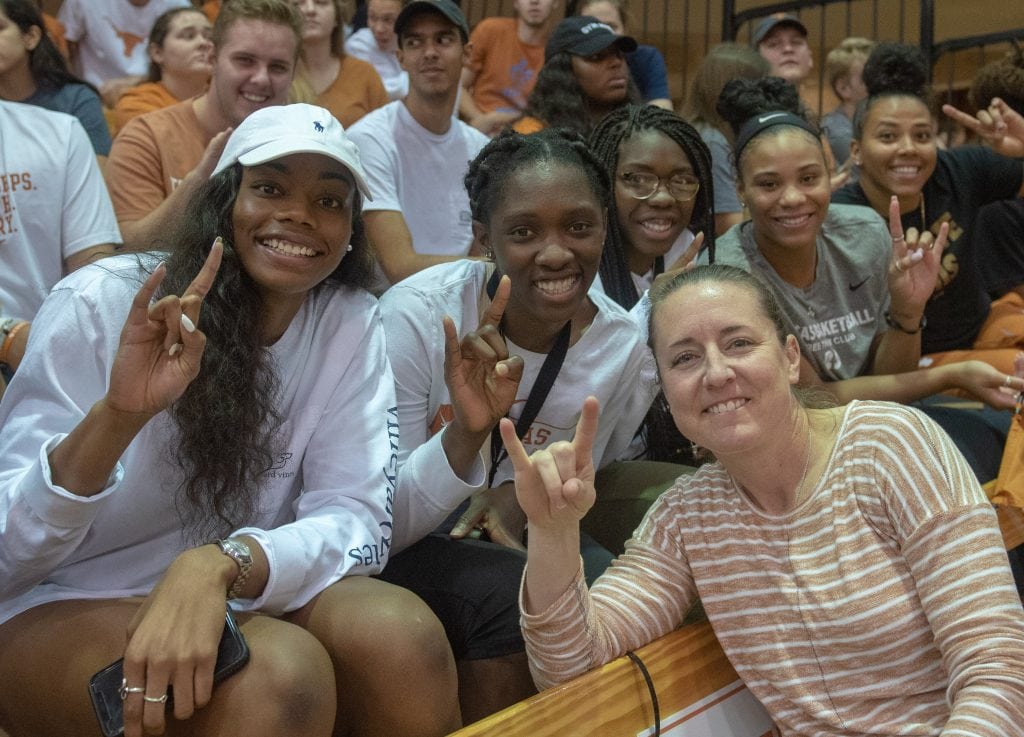 GETTING GEARED UP FOR GAMEDAY

Performing his first concert in Austin since 2014, Aloe Blacc will headline Longhorn City Limits before the TCU game Saturday. Austin's own blues guitarist Jackie Venson, named Austin360's Breakout Artist of the Year in 2017, is on the bill as well and takes the stage from Noon to 1 pm. Blacc will perform from 1:30-2:30. Longhorn City Limits will take place at every home game on the LBJ Lawn outside the northeast corner of DKR-Texas Memorial Stadium. Even better, Stubb's BBQ and additional concession options will be available on a game-by-game basis. Fans can also enjoy happy hour pricing at Longhorn City Limits including $5 16-oz. domestic beers, $6 16-oz. premium beers and $5 wine spritzers.

Turati raced out to a 4-1 advantage in the opening set before Elie responded by winning consecutive games to pull within 4-3. From there, it was all Turati as she broke Elie and held serve to close out the first-set victory.

Elie got as close as 4-2 in the second set, but Turati responded with a service break and held serve to finish out the match.

Now, Turati will play the winner of Wednesday night’s Round of 16 match between second-seeded Grace Min (USA) and Robin Anderson (USA). On Tuesday, Turati outlasted Tara Moore of Great Britain in a 3-hour, 32-minute marathon match. With the score tied 2-2 in the decisive final set, Turati broke Moore in the fifth game and then held serve to build a 4-2 cushion. Turati then held serve in her next two opportunities to finish off the victory.

Turati is No. 1 in the Oracle/ITA preseason women’s collegiate national singles rankings. The 2018 Big 12 Conference Player of the Year posted a 28-4 overall singles mark and ended her sophomore season at No. 3 in the final Oracle/ITA Division I singles rankings. Turati spent nearly three months atop the ITA women’s single rankings and produced a 16-2 dual-match record for the Longhorns at the No. 1 singles position in 2018. She became the first UT player to top the ITA singles rankings since Kelly Pace in 1995.

As one of only 30, No. 11 Texas soccer senior midfielder Katie Glenn was named as a women’s Division I candidate for the prestigious 2018 Senior CLASS Award.

To be eligible for the honor, a student-athlete must be classified as a NCAA Division I senior and possess notable achievements in four specific areas of excellence — community, classroom, character and competition. An acronym for Celebrating Loyalty and Achievement for Staying in School®, the Senior CLASS Award® focuses on the total student-athlete and encourages students to use their platform in athletics to make a positive impact as leaders in their communities.

There’s no doubting the veteran Glenn has helped the Horns throughout her career while making the most of her time on the Forty Acres. The Longhorns are currently unbeaten with an 8-0-1 start and the Round Rock native currently leads the Big 12 Conference with six assists and has also scored four goals to rate second in the league behind teammate Cyera Hintzen in total points (14). She was recently named Big 12 Conference’s Offensive Player of the Week (Sept. 11).

Off the field, Glenn maintains a 3.31 GPA in speech and language pathology and was named a 2017 United Soccer Coaches Third-Team Scholar All-American for her efforts in the classroom. In the community, she has been involved with a myriad of projects including: “Operation School Bell,” “Orange Santa,” “Supply the Teachers,” “UT & Me National Women & Girls in Sports Day” and the “TexasTHON” to benefit the Dell Children’s Miracle Network.

The 30 women’s candidates will be narrowed to 10 finalists midway through the regular season, and those 10 names will be placed on the official ballot. Ballots will be distributed through a nationwide voting system to media, coaches and fans, who will select one female candidate that best exemplifies excellence in the four “C’s” of community, classroom, character and competition. The Senior CLASS Award® winner will be announced during the 2018 Women’s College Cup® championship in December.

Now Glenn and her Texas teammates open up Big 12 Conference play at home Friday against Baylor at 7 pm at Mike A. Myers Stadium. The match will be broadcast live on Longhorn Network, while the first 400 fans in attendance will receive a FREE Texas soccer scarf.

SWIMMING IN THE USA

Six stud swimmers from the University of Texas Men's and Women's Swimming and Diving teams were named to USA Swimming National Team Wednesday.

Sophomore Evie Pfeifer and freshman Grace Ariola were selected for the women's roster. Pfeifer qualified in the 200 and 400 IM after her strong performance at the 2018 Nationals over the summer and Ariola was selected in the 50 freestyle with her time of 24.83 at Nationals.

Senior Townley Haas is once again selected to represent the United States after winning a gold medal in the 200 freestyle at the Pan Pacific Championships earlier this summer. Tate Jackson's win in the "B" final of the 100 freestyle at Nationals also qualified him for the spot on Team USA, while sophomore Austin Katz earned his bid with a third place finish in Tokyo at the Pan Pacs in the 200 backstroke. Senior Sam Stewart broke a school record at Nationals over the summer and will represent Team USA in the 400 IM.

In all, 111 swimmers were named to the United States roster, comprised of the top six swimmers from each individual Olympic event.

Furthermore, the new schedule is out and the Longhorns will open with their annual Orange & White meet on Sept. 28 at the Lee & Joe Jamail Texas Swimming Center. Texas will officially kick off the season by hosting a two-day, double-dual against Florida and the third-place finisher from last year's NCAA Championships, the Indiana Hoosiers, on Oct. 19 and 20 before meeting in-state rival Texas A&M on Nov. 2 in Austin.