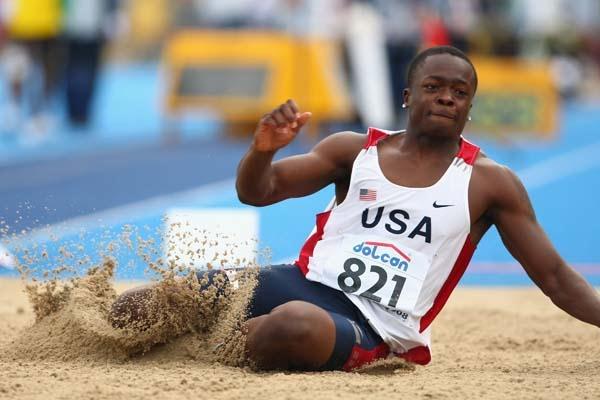 TORONTO, Ontario — Despite concentrating full-time on his career as a wide receiver and kick returner for the Buffalo Bills, former Texas dual-sport star Marquise Goodwin proved he remains among the world’s elite long jumpers by winning the silver medal in the event Wednesday at the Pan American Games.

Goodwin claimed second place in the standings on his initial jump of 8.13 meters, only to watch other competitors bypass him in the standings. But he reclaimed second place on his third jump when he leaped 8.27 meters (27 feet, 1.75 inches). Fellow American Jeffrey Henderson won the gold medal with a leap of 8.54 meters.(Continue reading below...)

(...continued from above.)Goodwin, who will rejoin the Bills when they open training camp next week, was not the only Longhorn competing. Two current members of the women’s team also competed Wednesday.

Junior-to-be Kendall Paisden clocked a 51.81 to win her semifinal heat of the women’s 400 meters, advancing to Thursday’s championship round. Her time was the fastest time of the semifinals by .43 seconds.

Meanwhile, sprinter Morolake Akinosun, who will be a senior at UT this fall, finished seventh in her heat — and 11th overall — in the 100-meter dash, in 11.29 (after running an 11.12 in the preliminary heat). Akinosun remains in the pool of runners eligible to represent Team USA in the 4x100-meter relay.

A fourth Longhorn, former Texas distance specialist, will run Friday night in the final of the 1,500 meters.