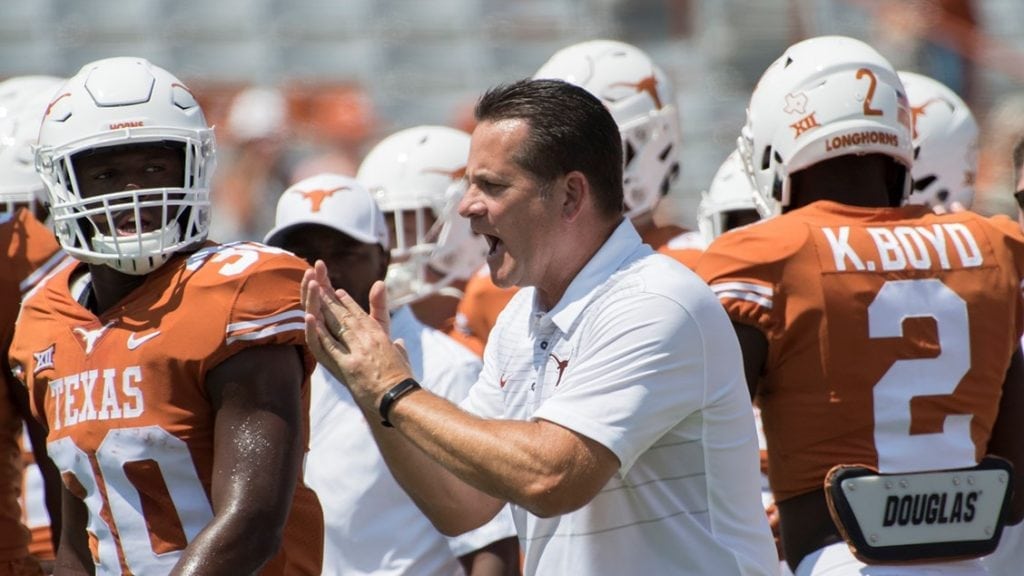 Texas offensive coordinator Tim Beck was hospitalized and will miss the Longhorns' game against Kansas State in Manhattan Saturday (photo courtesy of texassports.com).

Horns OC Beck hospitalized, will miss trip to Manhattan but expected to recover

As the Texas football team embarks on a difficult road voyage this weekend, the Longhorns will unfortunately be without offensive coordinator Tim Beck.

Friday afternoon the University of Texas announced announced that Beck is in the hospital being treated for an infection, and will not make the trip to Manhattan for the Kansas State game, Texas head athletics trainer for football Anthony Pass said.

The second-year Texas coordinator, who came to Texas with head coach Tom Herman, is expected to return to the team on Sunday.

“It’s unfortunate that Tim will not be able to be at the game with us, and we wish him a speedy recovery," Herman said. "We’ll pull together as coaches, and our offensive staff will call plays collaboratively."

Beck was absent from the regular weekly media availability with the Horns coordinators, including defensive coordinator Todd Orlando, as co-offensive coordinator and offensive line coach Herb Hand met with the media instead. Hand, who joined the 'Horns this season coming over from Auburn, will likely have a larger role in running the offense Saturday as Texas looks to take down Kansas State in Manhattan for the first time in 16 years.

Under Beck this season, Texas has scored no fewer than 28 points, and the 'Horns eclipsed the 30-point plateau in both wins over USC and TCU.

Texas will take on the Wildcats in Manhattan, Kan. at 2:30 pm with the game airing on Fox Sports 1.