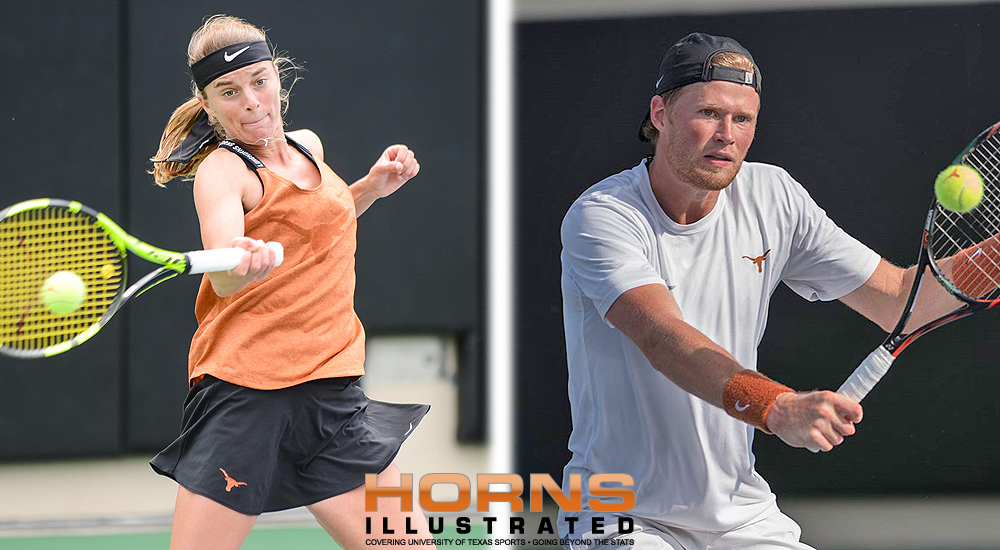 Anna Turati and the Texas women's tennis team, and Christian Sigsgaard and the men's team both finished second in the Big 12 Championship; Texas is expected to be a host site for the first round of both the men's and women's NCAA Championships (photos courtesy of texassports.com / graphic by Horns Illustrated).

LAWRENCE, Kan. — The University of Texas carries a well-earned reputation as one of the premier schools in the country for men’s and women’s tennis. The Longhorns showed over the weekend that they remain among the nation’s elite programs by finishing second in the men’s and women’s Big 12 Championship in Lawrence, Kansas.

The No. 2 men’s team lost, 4-1, to No. 8 Baylor in Sunday’s final. The loss dropped the Longhorns’ record to 23-3 this season; all three setbacks came against teams currently ranked among the nation’s top 10.

“It’s disappointing not to be able to win the last match of the season after such a fantastic season for the guys,” interim head coach Bruce Berque said. “I’m proud of the way they competed on every court, and we were tough to put away today. The doubles point was pivotal, as it often is when two top-10 teams match up. We just didn't execute as well as Baylor did in key moments.

“But I'm definitely proud of the way the team has played all year long, and hopefully this will make them even hungrier for that NCAA tournament.”

The No. 6 pair of senior Harrison Scott and junior Christian Sigsgaard kicked off the match by blanking the nation’s top-ranked doubles duo of Sven Lah and Jimmy Bendeck, 6-0. But junior Yuya Ito and freshman Chih Chi Huang lost to Baylor’s Johannes Schretter and Constantin Frantzen, 6-2, and Colin Markes and Leonardo Telles fell, 6-4, to Baylor’s Batias Soto and Will Little, giving the doubles point to the Bears.

The Longhorns now get a week off while preparing to host an NCAA Tournament Regional May 3-5 at the Texas Tennis Center.

The Jayhawks jumped out to an early lead by claiming the doubles point. UT’s No. 59 tandem of Fernanda Labraña and Dijana Spasojevic fell, 6-2, to the No. 71 pair of Anastasia Rychagova and Sonia Smagina, while KU’s Malkia Ngounoue and Maria Toran Ribas put away Petra Granic and Bojana Markovic for the Longhorns.

The loss dropped Texas, the outright regular-season champion in the Big 12 for the second straight year, to 18-4, and snapped a 12-match winning streak. Despite falling short this season, Texas has won 10 Big 12 Conference Tournament championships.

No. 53 Granic got UT’s first point in the match by rolling KU’s Ploburng Plipuech, 6-1, 6-3, in the No. 3 singles spot. For Granic, the victory was her ninth consecutive singles victory and improved her spring singles record to 15-1.

Kansas responded with a pair of straight-sets victories, as Smaginaknocked off Markovic, 6-4, 6-0, at the No. 4 singles and Nina Khmelnitckaia topped Labraña, 6-2, 6-4, at No. 5.

The bracket for the upcoming 2019 NCAA Div. I Women’s Tennis Championship will be announced during the selection show at 5:30 p.m. (Central time) Monday, April 29. Texas is expected to be a host site for first and second rounds of the NCAA Championship May 3-5.