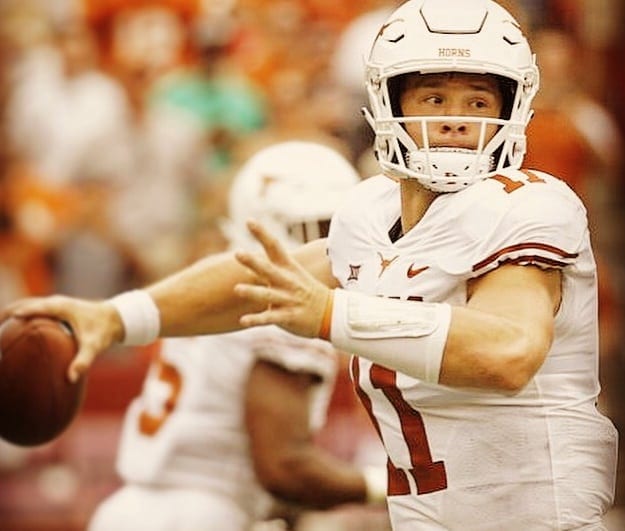 Texas prides itself on being a 4th quarter team, now QB Sam Ehlinger and the Horns hope to prove as much Saturday vs. No. 7 Oklahoma (Photo courtesy of texassports.com).

Finishing the fourth quarter emphatically means the Longhorns put themselves in position to close-out a win.

Priding themselves on being a fourth-quarter squad, the No.19 Texas football team loves looking at themselves as finishers at the end of a complete win — what they’re planning on handing No. 7 Oklahoma en route to closing out a win Saturday.

“We’ve been training for the fourth quarter all year long. And we are a fourth quarter team, that’s the quarter that we thrive in,” offensive lineman Elijah Rodriguez said.

Texas talked about finishing from the start of the preseason — and for the first time this year, the Longhorns offense finished the fourth quarter of a win on the field against Kansas State.

That’s given a reinforcement to the state of the Horns’ confidence, sophomore quarterback Sam Ehlinger said.

“We knew we could finish the game on the field. That’s something we had been preaching all offseason, I feel like it’s been a constant trend every week,” Ehlinger said. “I think that’s a huge positive of something that’s happened this year so far.”

The Texas defense dominated the second half against TCU and USC, when the two opponents scored just three points total, while both sides were a little shaky in the win over Tulsa.

After a Longhorn defensive stop, the offense seized their moment to fulfill their finishing promise, according to wide receiver Collin Johnson.

Johnson hauled in a crucial third-down catch to keep that drive alive, and now both sides of the ball feel all facets are ready to smother the Sooners for four quarters.

“It’s not something that just happens on Saturday we do that every single day in practice,” Johnson continued. “Everyone's really starting to see it now happen in real time in the game — that's been happening for a long time before that Saturday or that particular Saturday.”

Doing It For The ‘D’

The Wildcats broke through with touchdowns in the third and early in the fourth quarter to take a 19-0 Texas lead down to 19-14, but the Longhorns sealed up everything after that and won in a different fashion to give them a sense of a more complete team heading into the Texas-OU showdown.

“I think staying on the field is gonna be big for us, obviously helping our defense out because they’ve done an incredible job this entire year helping us out and getting us the ball when we need it,” senior tight end Andrew Beck said. “So I think it’s gonna really, really benefit us this week.”

How did the Horns stay on the field? Feeling the moment wash over the team with a relaxed focus of following through on their training.

“We were staying out of — with the exception of the third-and-11 completion to Collin —we were staying out of long third down situations, we were staying ahead of the chains, Ehlinger said. “It’s a positive trend that we’ve learned how to chew up the clock when we need to and keep our defense off the field in order to have a higher chance of winning the game on the field.”

There Was Just No Doubt

If the game is close, it’s the Longhorns game to win they believe, this Saturday against Oklahoma and all season long.

“Everybody has bought in. And that’s a good thing,” he said. “We’re looking forward to being successful the rest of the season.”

Texas takes on Oklahoma in the Red River Showdown at 11 a.m. Saturday at the Cotton Bowl in Dallas.

The Horns say they’re ready to be the best version of themselves, starting with their toughest test of the year.

“I feel like a lot of teams, a lot of people have different mindsets when it comes to this game,” defensive back Brandon Jones said. “We’re gonna get their best shot and they're gonna get our best shot.”