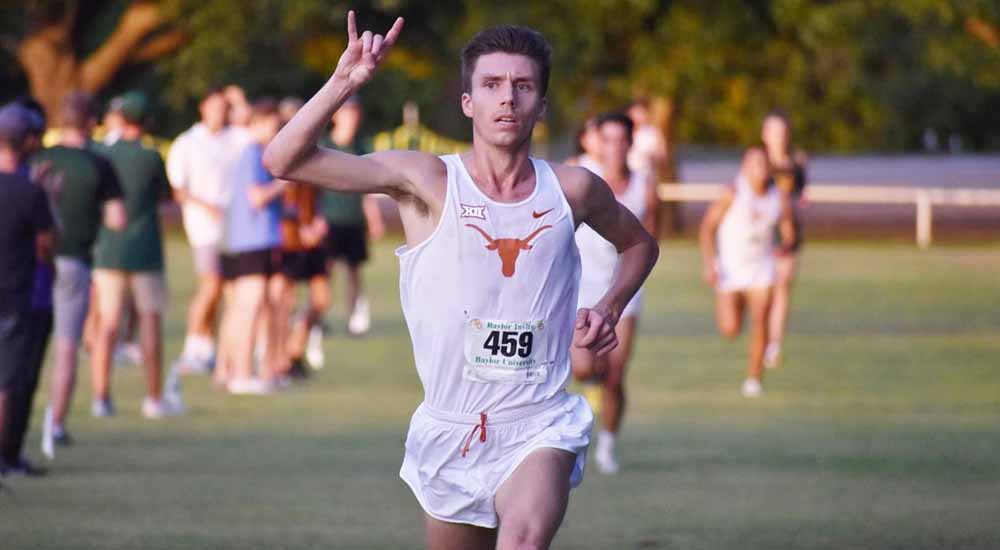 The Texas Fight mentality was evident in Longhorn athletics this past week as many of the teams were in action both at home and on the road. Featuring exciting races, heartbreaking penalty kicks and rivalries, the Horns were well-represented in what proved to be a thrilling week for Longhorn sports. All that and more is included in this edition of “411 on the Forty!”

Cross country sprints to top-three finishes at Big 12 Championships
Cross country got started on the right foot (no pun intended!) as both the men’s and women’s teams ran Saturday at the Big 12 Championships, with the men claiming third and the women taking home second. Iowa State won the men’s championship while Oklahoma State won the women’s title, scoring just two points ahead of the Horns.

The men, who ran an 8K, were paced by junior Sam Worley, who came in fourth with a time of 23:50.5, just over 14 seconds behind the individual champion from Iowa State, Edwin Kurgat. That was a personal best for Worley, this season as he ran .4 seconds better than his performance earlier this season at the Bill Dellinger Invitational. Along with teammates John Rice and Haftu Knight, all three won All-Big 12 honors.

For the women, who were running a 6K, senior Kathryn Gillespie came in fourth as well, putting up a time of 20:43.4. Coming in just two seconds behind her were fellow Longhorns Claudine Blancaflor and Destiny Collins. The three were the key in securing the team’s second place finish. For their efforts, those three, along with Beth Ramos, who finished 15th, received All-Big 12 honors.

Next, they look ahead to an important NCAA South Regional in which the Horns will need to have a superb performance prior to the NCAA Championships, about a week afterward. The South Regional will be Nov. 15 on the campus of the SEC’s Arkansas Razorbacks in Fayetteville, Arkansas.

Men’s swimming and diving defeats Texas A&M in a showdown of top-10 teams from the Lone Star state
Last Friday, both swimming and diving squads raced their way to victories at the meet hosted by their in-state rivals in College Station. In a top 10 showdown, the No. 2-ranked Texas men defeated the Texas A&M Aggies, who were ranked No. 7. One of the most notable performances was a sweep of the podium in the 1,650 freestyle, as Jack Collins took first, Alex Zettle second and Chris Yeager third. Collins finished an astonishing 19 seconds ahead of fellow Longhorn Parker Neri, who finished fourth. Freshman Caspar Corbeau sprinted his way to two first-place finishes in the short distance events as he won the 100 breastroke with a time of 54.62 and the 200 breastroke in 1:57.65. They square off in the Hoosier state (Bloomington, Indiana) this weekend in a Friday-Saturday tri-meet against the Indiana Hoosiers and Louisville Cardinals.

Soccer falls in a heartbreaking Big 12 Quarterfinal
Soccer’s hard fight against TCU in the Big 12 tournament ended in a tie, and the Longhorns were eliminated in a penalty kick shootout. After not being able to find the back of the net in regulation time, they headed to overtime with the score knotted at 0-0. In the shootout, the teams traded goal for goal, with Emma Regan scoring for Texas first. However, thanks to solid play from Horned Frogs goalie Emily Alvarado, UT’s next two shots were stopped while the Frogs successfully made all three of their attempts, and won the shootout, 3-1, to advance.

Volleyball keeps Big 12 winning streak alive
Rolling on and staying perfect in Big 12 play was the volleyball team, which still holds the No. 1 national ranking in the American Volleyball Coaches Association (AVCA) poll. The Longhorns only played one match this week, hosting West Virginia in front of a crowd of nearly 4,000 passionate Longhorn fans Sunday. Sweeping the Mountaineers, 3-0, the Horns were led on offense by Micaya White, who had 15 kills, and Jhenna Gabriel, who put up 32 of UT’s 44 assists. Anchoring the defense was Logan Eggleston, who had 14 digs and two blocks. The win was the 20th consecutive victory against Big 12 opponents for the Longhorns, who have not lost a set since dropping one in a 3-1 victory over Iowa State.