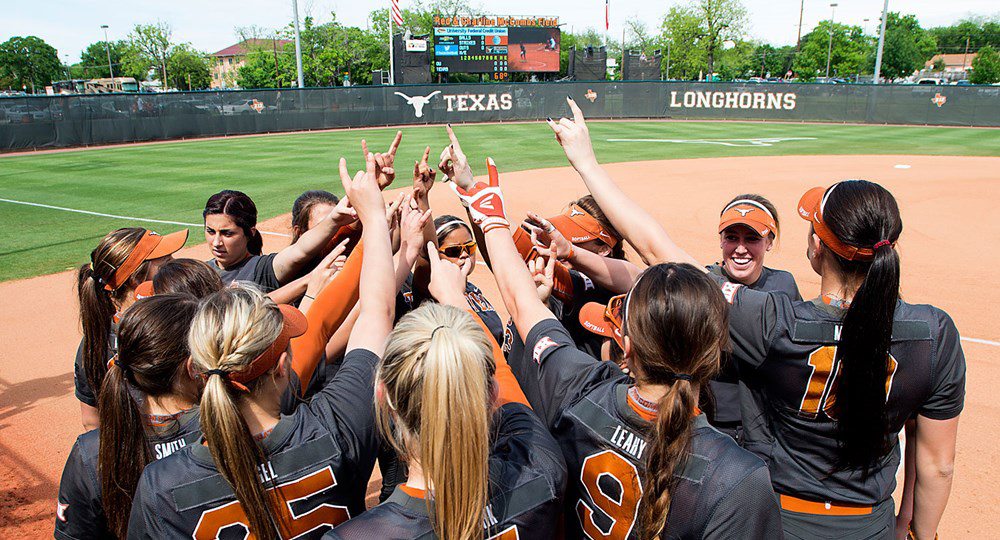 The Texas softball team scored 12 runs in the first inning Thursday en route to a 15-1 hammering of Abilene Christian (photo courtesy of texassports.com).

AUSTIN, Texas — The No. 21 University of Texas softball team piled up a season-high 14 hits and breezed to an 11-0 record by blasting Abilene Christian, 15-1, Thursday at Red & Charline McCombs Field.

The game was stopped after five innings, but for all intents and purposes, it was over in the first, in which the Longhorns scored 12 of their runs.

The Longhorns’ offensive assault was carried out with just three extra-base hits — all doubles — but Texas head coach Connie Clark said the onslaught was possible because of her team’s discipline.

“We have to stay patient at the plate, and we saw that again tonight in the first inning,” Clark said. “We weren’t willing to chase a lot of pitches, and when teams see us on paper, they come in not wanting to be too sweet over the plate. They want to be too fine, and as long as we’re not helping them and being selective at the plate, good things are happening. I’m really pleased with the effort from our hitters over the first half of the game.”

The Longhorns battered three ACU pitchers. Starter Allison Turner exited the game after just one-third of an inning and was charged with eight earned runs after allowing four hits and walking three. Her replacement, Julia Montoya, had an equally rough outing, giving up five earned runs (four in the first inning) while getting tagged for nine hits.

The Texas offense was led by a trio of players who each had two hits. Freshman right fielder Reagan Hathaway continued her torrid start to her college career, picking up a pair of hits (including a double) in three at-bats to raise her average to .481 and drove in four runs. Shortstop Devon Tunning, the team’s third-leading hitter (.424), also scored a pair of runs and had a pair of hits and a double, while pinch hitter Taylor McAllister went picked up two hits and scored a run.

The Longhorns have little time to celebrate Thursday’s laugher. The teams will square off again Friday at noon, after which Texas will play Tulsa at 2:30. Both games will be broadcast on the Longhorn Network.