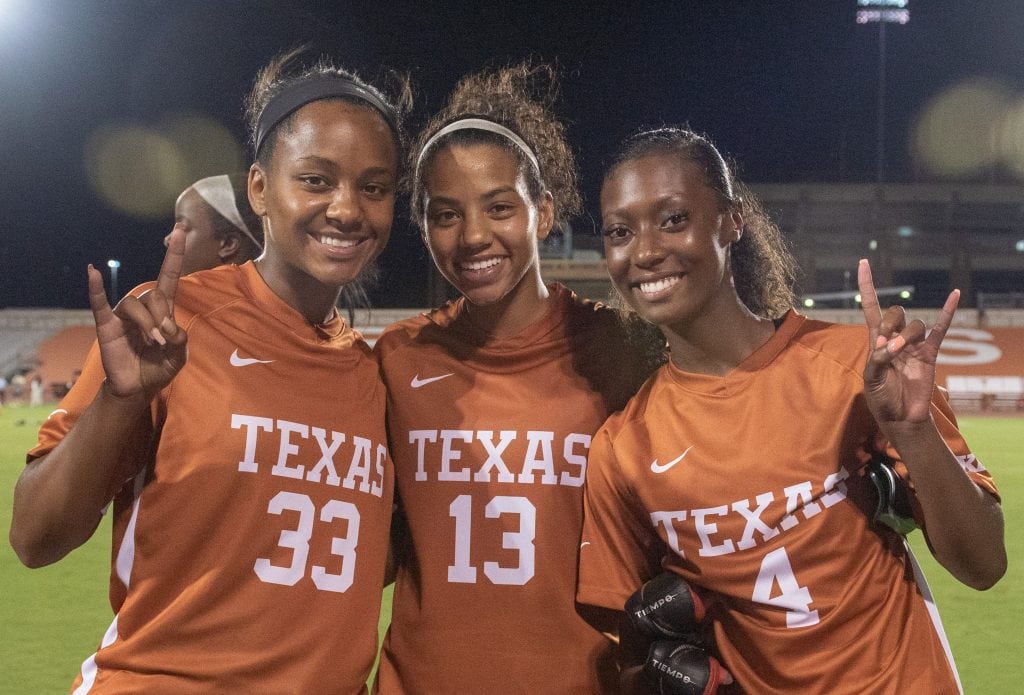 AUSTIN, Texas — With winds whipping freshman Mackenzie McFarland wound up and calmly connected for her first-career goal. With that, and a frenetic defensive effort, the Texas Soccer team took a narrow 2-1 win in its home opener against Long Beach State Thursday at Mike A. Myers Stadium.

Cyera Hintzen hammered in her fifth goal in four games to put Texas ahead 1-0 in the first half. The recent National Player of the Week honoree took some great advice from teammate senior Kayra Dollas seconds before to simply "shoot it."

Long Beach State, which lost to second-ranked UCLA in the 90th minute earlier this season, put pressure on Texas throughout the match, equaling Texas' 11 shots in the match. The 49ers finally broke through after a blocked shot from Texas when forward Ashley Gonzales captured the loose ball and quickly scored from six yards out to make it 1-1.

Coming in as a sub, McFarland made sure her one shot counted as she calmly scored on a rebound to break the tie in the second half, earning the Horns their third win in four games. Sensing an opening, Dollas pushed the issue and skied a shot from 30 yards out. As it careened off the cross bar, McFarland kept pushing ahead and situated herself perfectly to pop in the rebound in the 62nd minute.

Truly, it was a team win as head coach Angela Kelly cycled in five subs early and often as Texas showed off its tremendous depth and ability to integrate on the fly so soon this season.

"I actually thought our players that came off the bench gave us a lift tonight," Kelly said. "We only had the 16-18 days and added eight new players to the roster, so it takes a lot for them to be able to acclimate and assimilate with all the information in the system."

Long Beach State brought a flurry of offensive attacks late, but goalie Nicole Curry and the Texas D showed cohesion to the last second and secured the home win.

The first three Texas opponents this season were all picked to win their respective conferences in the preseason. The 49ers are the lone dissenter — picked to finish second in their conference by a mere two points.

"We’ve played teams...that are all going to be in the NCAA Tournament," Kelly said. "We’re being tested and that’s why the schedule was created that way. We've just gotta grind it. Not every win is gonna be attractive and we understand that too."