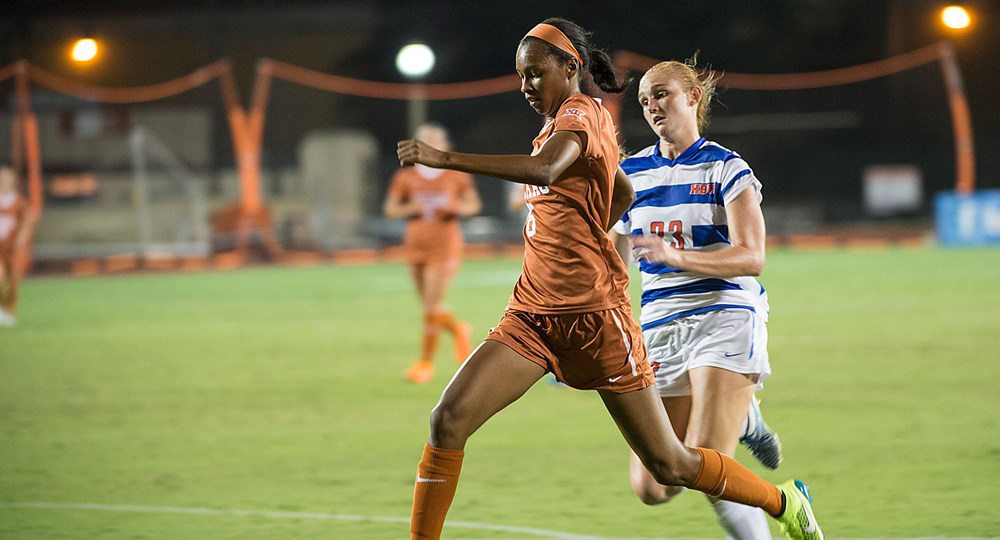 Freshman forward Alexa Adams scored a pair of goals for the second consecutive game, leading the University of Texas women’s soccer team to a 3-0 shutout of visiting TCU Sunday.

The shutout, which improved the Longhorns’ record to 6-3-4 overall and 3-1-1 in games against Big 12 opponents, was the 29th in the career of senior Texas goalkeeper Abby Smith, tying her with former UT netminder Dianna Pfenninger for the most in school history.

Texas head coach Angela Kelly said the victory and Smith’s record-tying shutout were the result of improved play and the Longhorns’ commitment to playing the right way.

“Every win in conference is important, especially protecting your home field,” Kelly said. “I was really proud of the effort and some great finishes. But the point I really highlighted with the team was the clean sheet, and Abby Smith is one step closer (to the school career shutout record). I’m just really happy with how well organized we were and how they followed the game plan.

The game marked the first time this season that the Longhorns have scored three (or more) goals in a game. In addition to Adams’ two goals, senior forward Kelsey Shimmick also scored her second goal of the game.

Adams now leads the Longhorns in goals (five), points (10) and shooting percentage (.278), and said her recent flurry of goals is nothing more than a result of the team converting offensive chances. She also became the first UT player in just over a year to total four goals over a two-game stretch since Olivia Brook pulled the feat Aug. 31 and Sept. 5, 2014, against Nevada and Texas A&M-Corpus Christi.

"I think it’s just time that we started finishing our opportunities,” Adams said.

Kelly said that the back-to-back victories over Iowa State and TCU were evidence that the Longhorns have played better than their record suggests, and are a solid springboard into Friday’s game at Texas Tech, which entered the weekend ranked 13th in the National Soccer Coaches Association of America (NSCAA) poll.

“I think what we were able to see was that we have been creating tons of opportunities all season,” Kelly said. “For whatever reason, or for whatever circumstance, they haven’t always been falling for us. Today was an example of creating an opportunity and tucking our opportunities away early. That’s the difference in the game of soccer. That just takes the weight off. We didn’t take our foot off the pedal; a 2-0 lead at halftime is the scariest lead in the game of soccer. We really challenged them at halftime, and they came out and they pushed for another one. I’m just really happy for the program and very, very happy for all of our young ladies.”