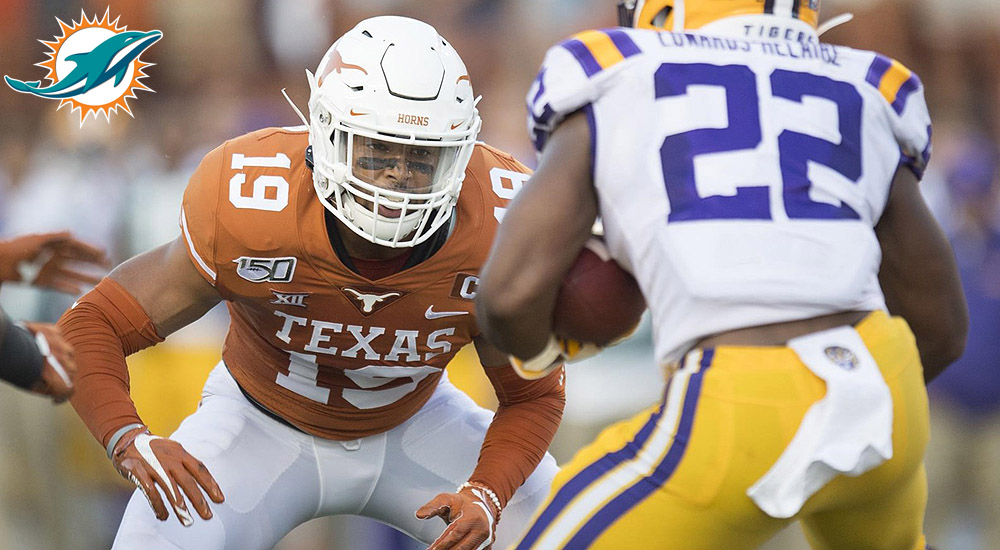 Texas safety Brandon Jones is headed to South Florida, after the Miami Dolphins selected him in the third round of the 2020 NFL Draft (photo courtesy of texassports.com / graphic by Horns Illustrated).

The overhaul of the Miami Dolphins will have a Texas flavor to it after the Dolphins selected Texas safety Brandon Jones in the third round of the 2020 NFLDraft, with the 70th overall pick.

"I didn’t know who was on the board at the time and I got a call from Fort Lauderdale, Florida," Jones said. "I answered it and talked to the coach (Brian Flores) and the GM (Chris Grier), and I was legit speechless. I was shocked. Everybody downstairs thought it was a prank call. They thought I went upstairs and prank called myself. They didn’t believe I was on the phone. I told them it was the Dolphins and everyone froze and then got hyped and started screaming, so I could barely hear. It was an experience I’ll remember forever."

Texas head coach Tom Herman said the Dolphins are getting a player whose play is as much a result of intelligence and character as it is his physical attributes.

“In Brandon, they’re getting a remarkable young man who has a heart of gold and is very smart and instinctual,” Herman said. “He is the best open-field tackler that I’ve ever coached. He gets them on the ground one way or another. He can come downhill and hit you in the run game, but can also roam center field and is extremely fast.”

The Dolphins’ selection of Jones