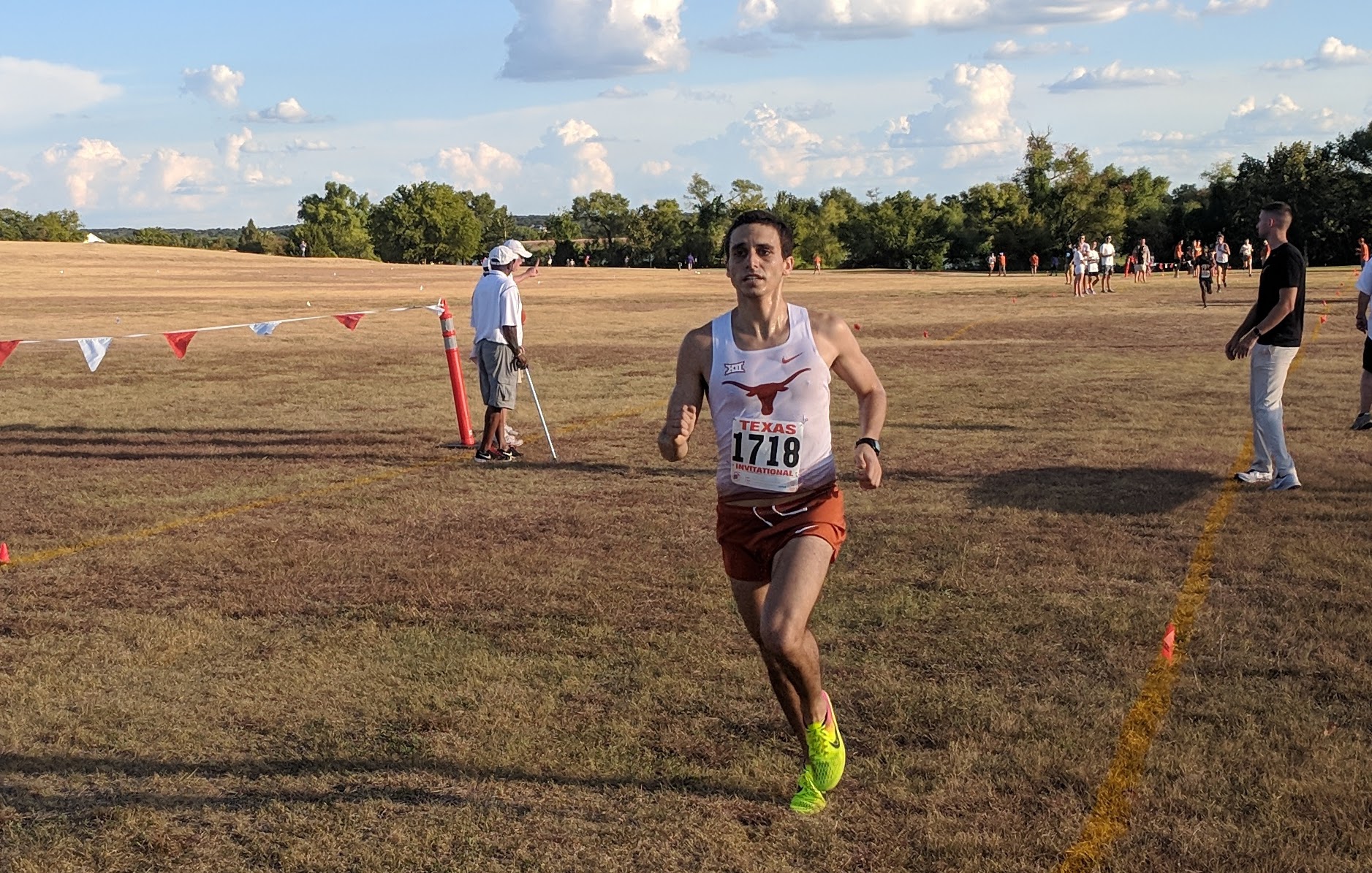 Busting off the rust from a summer without competition, the Texas Men’s and Women’s Cross Country teams took their first strides of the season as they hosted — and won — the Texas Invitational at Old Settler’s Park in Round Rock last Friday evening. Both the men’s and women’s teams won the team category for their respective races, which included competitors from Texas Southern and Prairie View A&M.

Junior Destiny Collins and senior Pedro Nasta put up individual wins for the women’s and men’s races, respectively. Collins led the Women’s team with a first-place finish in a time of 12:58 on the four-kilometer course. 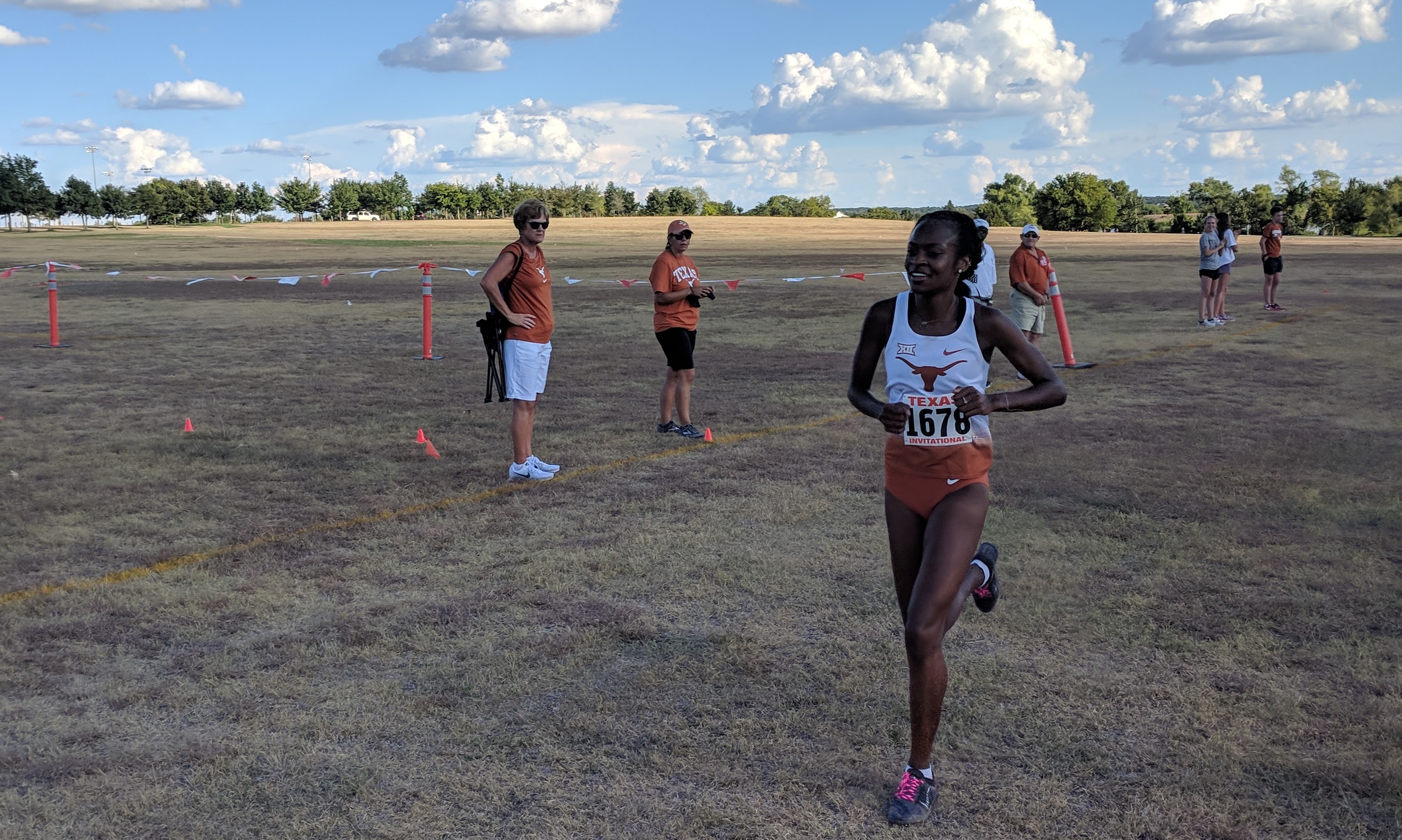 “Destiny’s 12:58 to break 13 minutes was unexpected in a good way,” women’s coach PattiSue Plumer said. “If you had told Alex Cruz she could run 13:20 and not win I don’t think she would believe you. That was pretty amazing.”

Collins enjoyed the win and felt like she accomplished what she had hoped in the season opener.

“I’m really happy to have a race under my belt since it’s been a while since I have raced,” Collins said. “My coach [Plumer] asked me to go out fast and then close hard. I may have gone out a little bit fast since it’s the first race back, but overall I think I executed well and I’m really excited.”

The women’s team had almost all of their team competing in the event, with 20 runners entered, which gave Plumer a chance to gauge her team’s status based on the results from the same meet at this time last year.

“We had time goals for all of the girls,” Plumer said. “The meet gave us an opportunity to work on skills we need to have later in the season. For example, we had them go out a little faster than they normally would. They all just handled it so well. Across the board, the times met or exceeded our expectations, so I’m thrilled.”

One of Plumer’s goals, for her top 10 runners to finish under 14:30, actually came to fruition better than expected as Texas’ top 13 runners finished under 14:30.

BEST FEELING IN THE WORLD

On the Men’s side, Nasta finished first with a time 15:06 on the five-kilometer course.

“I wanted to win,” Nasta said. “I think we showed some good Horns fight out there.”

Having not raced since the Big 12 Championship meet last fall, due to injury, Nasta said he loved racing again.

“It’s like the best feeling in the world,” Nasta said. “I fell back in love with the sport. I’m glad to be out of the training room and I plan to stay that way.”

Only six Longhorns competed with the meet primarily serving as a chance for some of the younger runners to get their feet wet.

"That was a nice way for Pedro to start his season," men's cross country coach Pete Watson said. "He showed up determined for a result and got it. It was the first time in a Texas uniform for many of the guys and they got to leave the meet with a win. That is a positive way to start their careers."

Nasta said he gave the younger runners some advice about the early season race.

“I was telling our freshman that races like these you can get really happy or real down, but the point is just to keep an even keel,” Nasta said. “No matter how the race went we have to be ready in November.”

The teams had the support of many of their track and field teammates as well as friends and family members. Overall, approximately 75-125 fans primarily wearing burnt orange came out to support the runners.

“It means so much for them to come out here,” Nasta said. “It was super hot out here, to say it without using any expletives. It wasn’t fun to run in, so I’m sure it wouldn’t be fun to stand out in either. It’s just great with the new coaches to have everyone all together.”

GETTING UP TO SPEED

With the hiring of new head track and field coach Edrick Floréal, both the women’s and men’s cross country teams also received new head coaches who will also coach the distance squads during track season. Floréal led the group of track and field athletes in cheering for the cross country runners. For Plumer it meant lots of new faces, while the cross country squad had been training for two weeks prior, many of the other track athletes had just arrived on campus a couple days before the meet.

“It’s nice to have all the burnt orange out here and see all these faces from the rest of the track and field team as well as a bunch of the parents,” Plumer said. “It makes me happy that I chose to come be a part of such a great [Texas] family.”

Both Collins and Nasta said their teams have been adjusting to the new coaching staff and their routines. Nasta is among a group of five seniors who will play a key role in the Longhorns’ season.

“We’ve got the best team we’ve had since I have been here,” Nasta said. “The new coaching staff brought in a new policy that our goal is to compete at nationals, and be top 10. I plan to contribute, whether it’s in practice or in the racing. We’re going to put the best team out there and I think we’re going to surprise some people.”

On the women’s side, six of the top seven runners return including All-Big 12 runners Alex Cruz and Destiny Collins. Last year, UT finished third at the Big 12 Championships and second at the NCAA South Central Regional Championships, qualifying for NCAA Championships, where the team finished 31st.

“We want to go back to nationals and do a lot better,” Plumer said. “If everybody runs well, then we’ll achieve those goals. So we really just want people to have great races, and race up to their abilities, then the winning takes care of itself.”

The women are ranked No. 2 in the South Central Regional this preseason by the USTFCCCA, as well as No. 27 nationally.

“We look really good in workouts so I’m excited to see how it comes together,” Collins said.

Cross Country will continue its season today at the Rice Invitational in Houston. The first big test of the season will come when the Longhorns head to Wisconsin Invitational in Madison Wisconsin on Sept. 28th.