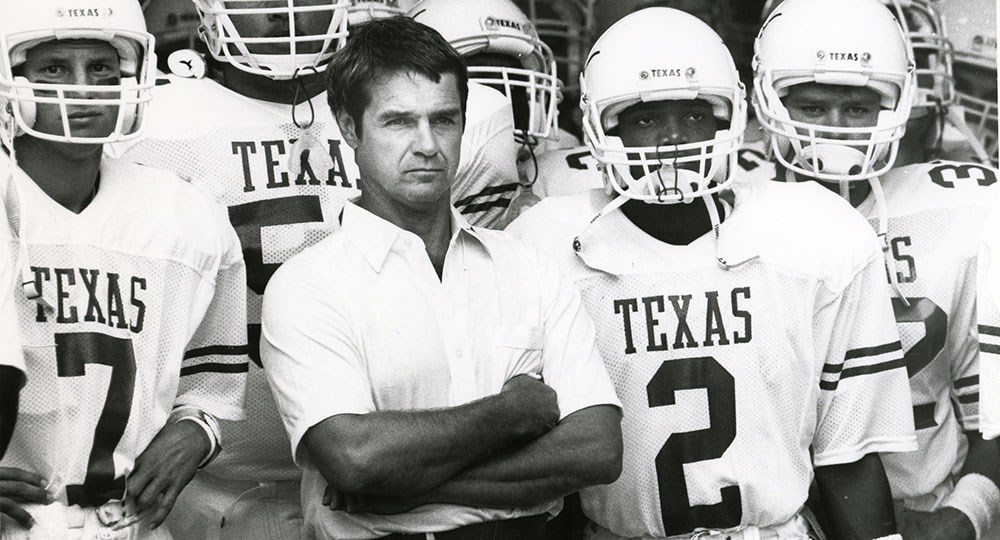 “I never could have imagined that when I first set foot on The University of Texas campus in early September 1960, that almost 55 years later I would still be here,” said McWilliams. “How fortunate I have been to work under men with great character and leadership qualities, beginning with Coach Wally Bullington at Abilene High School, and then Coach Darrell K Royal and Coach Fred Akers at Texas. My wife Cindy, my family and I have always tried to give the best we have to Texas, and certainly Texas has always given us the best it had. It is time now for me to go fishing.”

McWilliams was a three-year letterman at Texas (1961-63) and played center and defensive tackle on the 1963 Texas Longhorns National Championship Team. During his time on the Forty Acres as a student-athlete, he earned Academic All-American honors and graduated in 1964 with a bachelor’s in mathematics. After graduating, McWilliams served as assistant coach at Abilene High School in Texas for two year before becoming the school’s head coach in 1966. In 1970, Coach Royal hired McWilliams as an assistant coach, and for the next 16 years McWilliams worked under Coach Royal followed by Coach Fred Akers. McWilliams served as head coach at Texas Tech for the 1986 season. He then returned to Texas as head coach of the Longhorns from 1987-91. Following his coaching tenure, he stayed at Texas Athletics as an administrator.

“Coach McWilliams’ has demonstrated the loyalty, pride, and tradition of Texas Athletics during his time as a player, a coach and an administrator,” said Texas Men’s Athletics Director Steve Patterson. “We are appreciative of all he has done during his many years at Texas.”

In recognition of his efforts and contributions to Texas, McWilliams and his family will be honored on the field during the September 19, Texas-California game at Darrell K Royal-Texas Memorial Stadium.

“David lived the full student-athlete experience at Texas, earning Academic All-American honors and benefiting from his access to higher education and advancement through athletics,” said Texas Women’s Athletics Director Chris Plonsky. “Through both his athletic talents and personality, David has helped build the Texas Longhorns family, and his legacy will continue here long after his retirement.”

“Jill’s history with Texas as a student-athlete and coach, just like Coach McWilliams’, has proven a great asset in building the T-Association,” said Patterson. “Her experience at Texas allows her to build meaningful relationships with both our current student-athletes and former letter-winners, allowing them to stay connected long after they leave the Forty Acres.”

Sterkel began her time at Texas as a four-year swimming letter-winner from 1980-83, winning two Broderick Awards as National Swimmer of the Year (1979-80 and 19080-81) and National Female Athlete of the Year in 1981. One of the most decorated swimmers of her generation, Sterkel is a four-time U.S. Olympian, qualifying for the 1976, 1980, 1984 and 1988 Olympic Games. From 1992-2001, Sterkel served as head coach of Texas Women’s Swimming leading the Longhorns to 12 top-10 finishes in the NCAA Championships and 11 conference titles. Sterkel has been with the T-Association since 2006.

“We are taking this transition as an opportunity to restructure the T-Association to make it more efficient and to serve our letter-winners in the best way possible,” said Plonsky. “We are honored to continue to have Jill as a part of our staff in this capacity, and we look forward to watching the T-Association grow under her leadership.”

The T-Association is set to add two new positions in the coming months.