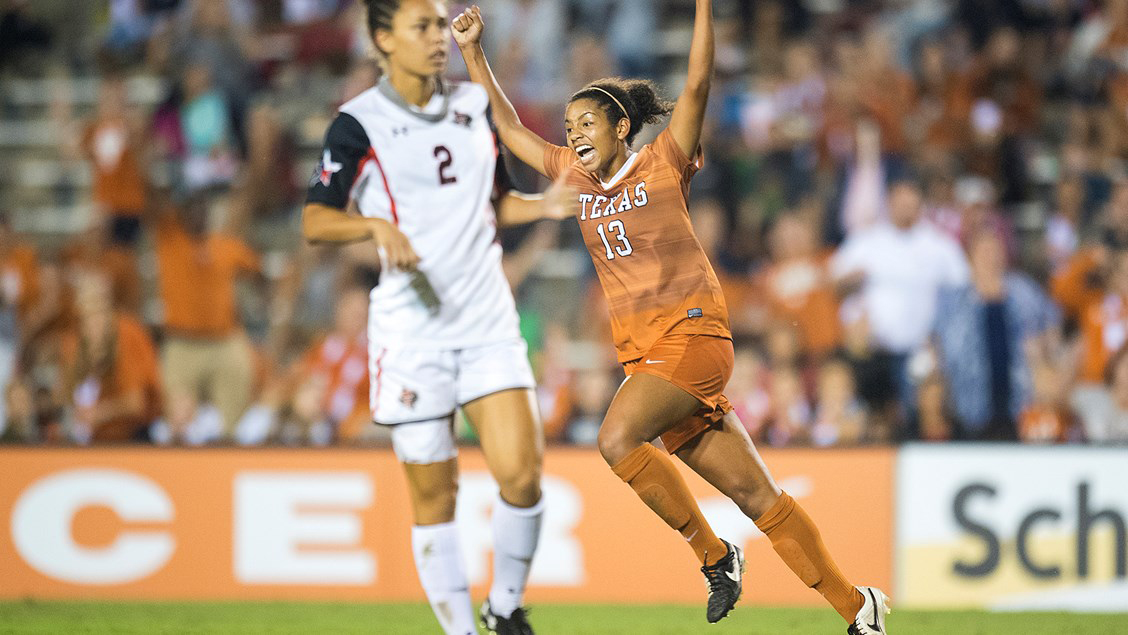 Junior forward Cyera Hintzen scored a pair of goals, including the game-winner in overtime, to lift No. 21 Texas over No. 23 UCF (photo courtesy of texassports.com).

CHAPEL HILL, N.C. — Junior forward Cyera Hintzen scored twice, including the game-winning goal in overtime, to lift the No. 21 Texas soccer team to a 2-1 victory over No. 23 UCF.

With the win, Texas improved to 2-0-1, while the loss was UCF’s first game of the season.

Hintzen has scored of UT’s six goals through three games this season. Her “golden goal” Friday gives her eight game-winning goals in her career, including three overtime game-winning goals, tying the school record.

This marks the third time Texas has started the season with as many as three games away from Austin, and the first time the Longhorns have emerged from three season-opening games away home without a loss. UT went 2-1-0 each previous time the first three games didn’t include a home game.

Senior midfielder Katie Glenn collected her second and third assists of the season on Hintzen’s goals to raise her season scoring total to five points.

The Longhorns outshot UCF, 17-11, including an 8-4 edge in shots on goal. Texas also enjoyed a 6-3 edge on corner kicks — a statistic many coaches view as reflective of how much each team possessed the ball during a game.

Texas took a 1-0 lead in the 23rd minute when defender Emma Regan made a run up the right sideline and then sending a pass ahead to Glenn, who send a cross toward the right post, where Hintzen finished from six yards out.

UCF got the equalizer in the 29th minugte when midfielder Zandy Soree buried a cross from Dina Orschmann.

Hintzen scored the game-winner in the 93rd minute, third minute of overtime. Redshirt sophomore forward Cydney Billups drove up the left side of the field and crossed to Glenn, whose shot was snuffed out by the UCF defense. Glenn was able to reclaim possession and tapped it to Hintzen about six yards out, and Hintzen was able to beat UCF goalkeeper Vera Varis for the game-winner.

The Longhorns will try to extend their unbeaten streak to four game when they return to Austin for the first game of the season at Mike A. Myers Stadium when UT hosts Long Beach State at 7 p.m. Thursday in a game that can be seen on the Longhorn Network.