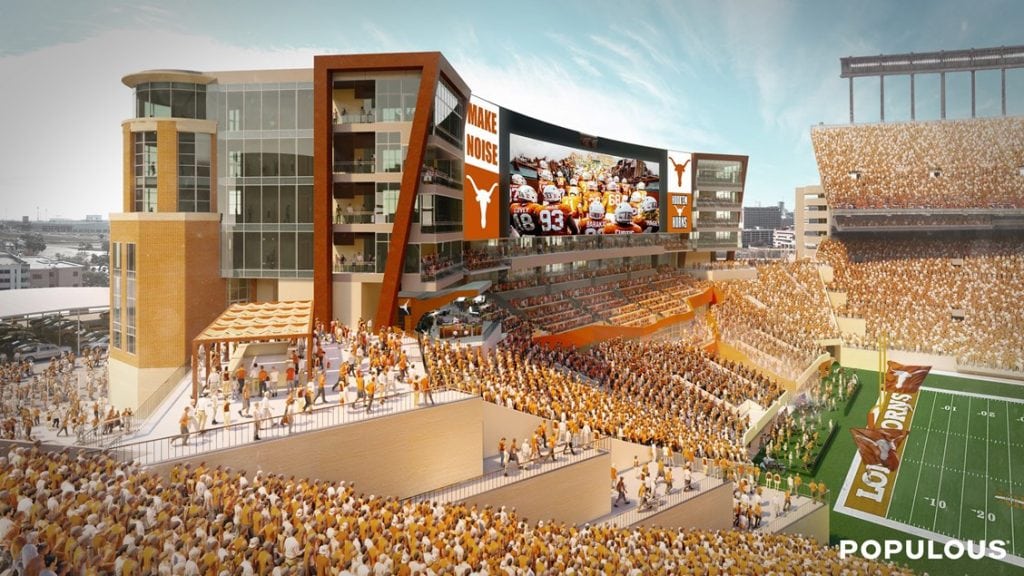 AUSTIN, Texas – This, most definitely, is Texas, as the Longhorns literally will be on display for all to see soon.

Adding to its “modern game day experience” with a Texas-sized addition to DKR-Texas Memorial Stadium, the University of Texas announced a $175 million DKR South End Zone design focusing on “quality, not quantity.”
The project, which Texas tabbed the firm Populous to design, features a new student terrace, athletic amenities and more, and is slated to break ground in Summer 2019.

For the first time ever, a logo — the iconic Longhorn — will be carved into a seating bowl, with a Longhorn-shaped balcony designed into the end zone seating, which will be visible from the air for all to see.

If the recently completed projects for the University of Arkansas football team and for the Milwaukee Bucks’ home facilities is any indication, Horns fans and student-athletes are in for a real treat.

Of the new Milwaukee arena, Fiserv Forum, Forbes Magazine said the state-of-the-art complex brings a “fresh perspective to sports and entertainment in Wisconsin’s largest city,” while it has “worked to create a mix of fan experiences.”

24 hours until we cut the ribbon to open @FiservForum!!#BuildTheFuture pic.twitter.com/kLqkMYTKWT

BRINGING IT IN and OPENING IT UP

The addition to the stadium will make DKR enclosed for the first time in 95 years, and aims to improve football training, game day offerings, and more. In line with other projects and upgrades across the country, the project will streamline football operations through a renovation to the Moncrief-Neuhaus Athletic Center, including enhanced and expanded student-athlete amenities and football coaches' offices as well as a multitude of new and unique fan experiences.

"The new south end zone will provide our student-athletes, staff and fans with the finest facility in the country and one that we all can be extremely proud of,” said Chris Del Conte, University of Texas Vice President and Athletics Director. “It will feature the best of the best when it comes to student-athlete amenities and training needs, first-rate coaching staff offices and meeting rooms along with state-of-the-art opportunities and experiences for our many fans and supporters."

WOULD YA LOOK AT THAT

Another of Populous’ designs came to fruition when the $160 million north end zone expansion at Reynolds Razorback Stadium opened to start the Arkansas Razorbacks season earlier this year. The players themselves raved about the amenities for student-athletes and the experience it gave them in preparing for football every week.

"Honestly, it is the best locker room in the country, unless there's a school I don't know about somewhere," sophomore quarterback Cole Kelley said to Hawgs Illustrated. "I mean really, even NFL locker rooms. I've never seen anything like it. It's just Grade A.”

Added Arkansas junior running back Devwah Whaley called the additions "amazing" and "first class," saying to Hawgs Illustrated, "I haven't seen anything like that besides the [Dallas] Cowboys' stadium. It's a blessing to have a locker room like that."

From rendering to reality, here’s a before and after look at @RazorbackFB’s new north end zone: pic.twitter.com/PrvC5838d2

The south end zone expansion will break ground in the summer of 2019 beginning with the Moncrief-Neuhaus Athletic Center renovations. Construction on the seats, clubs and additional amenities will be completed by kickoff in 2021.

The first looks of the design definitely invoke an image of the tailgate experience blending into the game day experience and more. Students will have plenty to celebrate in the new south end zone, from a student terrace with concessions to a student seating section with multiple corner patios that provide a unique game day vantage point, according to the University. Adjacent to the student section, a new stage will be home to the Longhorn Network and the network's iconic GameDay show, further connecting students to the Longhorns brand as well as its broadcast partners. Additionally, several premium experiences will be available, from the Bevo corral adjacent to the field-level club and patio - which players will proceed through for pregame, halftime and postgame field access - to the loge seating and Founders Suites.

"The modern game day experience is about quality, not quantity. Fans want unique experiences in an authentic place," said Sherri Privitera, Populous Principal-in-Charge for the project. "This is a game-changing project. From fully enclosing the stadium for a more intimate atmosphere to the impactful in-seat Longhorn logo, it is the ultimate celebration of The University of Texas."

Since 2015, the Kansas City-based Populous has completed four end zone expansion and renovation projects at the collegiate level.