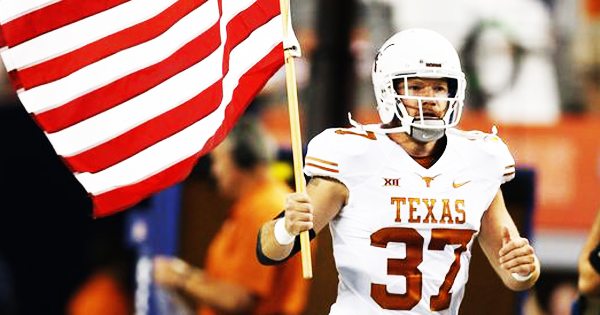 One of the most inspirational athletes in University of Texas history, Nate Boyer, fulfilled one of his dreams when he took the field with — and being credited with a tackle for — the Seattle Seahawks in their Aug. 14 preseason loss to the Denver Broncos.

But if his dream of reaching the NFL is to continue, it will be with another franchise. (Continue reading below..)

(...continued from above.) Boyer walked on at Texas after serving tours in Iraq and Afghanistan with the Green Berets, serving as little more than a confused scout team player who made the team largely because of his relentless drive and unwavering hard work. After his freshman season, he told then-UT head coach Mack Brown that he would take a football back to Afghanistan with him and teach himself to long-snap while serving another tour of active duty.

Boyer lived up to his word, teaching himself perhaps the most unique skill in the sport by firing the ball at a plywood target with a couple of holes in it. When he returned to Austin, he claimed the starting job for the next three seasons … during which he had zero bad snaps.

At 5-10 and 220 pounds, Boyer is substantially smaller than most NFL long snappers. At 34 years old and with three active tours of military service on his résumé, he is more experienced than every NFL rookie. But in multiple interviews Tuesday, Boyer said he was not ready to give up on his dream of playing in the NFL. He said he is unsure of what the immediate future holds, but says he plans to pursue another opportunity with another NFL team.