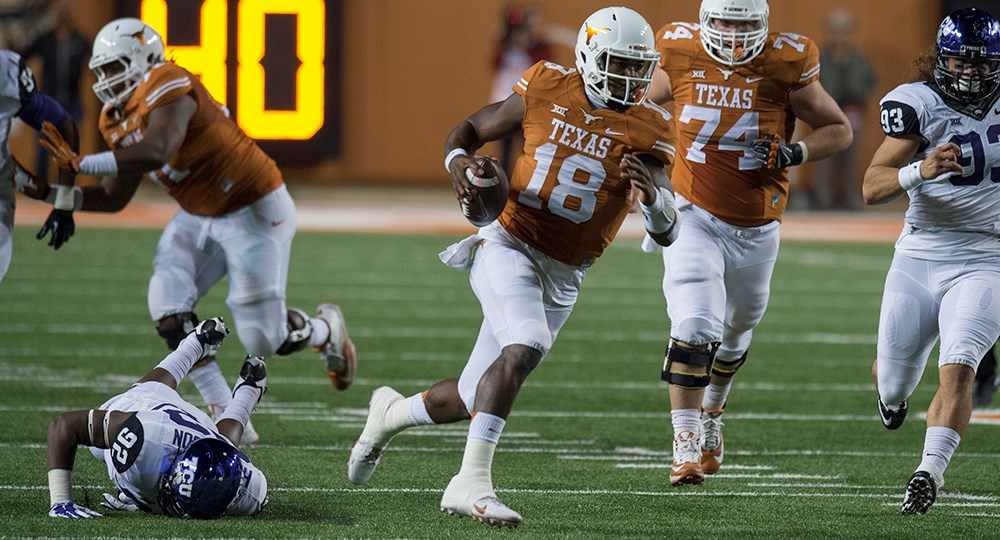 If you follow Longhorns football you already know that D'Onta Foreman was selected by the Houston Texans in the third round of the 2017 NFL Draft.

I would like to point out that I correctly predicted the Texans as his destination. While I completely recognize the luck involved, I stand by my claim. I predicted the team that would draft him and the round.

Watch out Chris Berman — there is a new Swami in town.

Other Longhorns found a home as well as teams from around the NFL followed up the draft by signing players as undrafted free agents.

Kent Perkins (Cincinnati): Perkins started 34 starts on the right side of Texas’ offensive line, 22 of which were at right guard. Perkins made the second team of the Big 12’s honor roll this past season. Quite the accomplishment and a testimony to the hard o-line work that goes in to a 2,000-yard rusher (Foreman) and a quarterback that throws for 3,000 yards (Shane Buechele).

Paul Boyette, Jr. (Oakland): From 2012-15, Boyette appeared in 42 games at Texas. Thirty-four of his 100 career tackles were logged this past season, and the defensive tackle also registered 5.5 sacks in his career.

Dear, @RAIDERS nation it's time to bring back a championship to this great organization! Ready to get to work. ?? #RaiderNation

Caleb Bluiett (Jacksonville): Bluiett was used as both a tight end and defensive end during his time at Texas. As a tight end, he had 10 receptions, 178 yards and two touchdowns. On defense, he recorded 45 tackles and 4.5 sacks. The 6-3, 257-pound Bluiett appeared in 44 games for the Longhorns.

I guess it's cool to announce it now. But first off I'd like to thank my Lord and savior, Jesus Christ, for blessing me throughout my life with a supportive family and an awesome Longhorn fan base for supporting me while at UT! I love you all! I would also like to thank the Jacksonville Jaguars for blessing me with the opportunity to continue my career. It's a process, but it's one that I'm more than happy to journey on. God is GREAT! God is GOOD! #HookEmForever #GoJags ????✊?

"After the season, Swoopes decided to switch positions in an attempt to catch the attention of NFL scouts. The 6-4, 249-pound Swoopes put up an impressive performance at Texas’ Pro Day on March 28, but he was not among the 14 tight ends drafted this week. He will get a chance to catch on with the Seahawks, who have five tight ends on their roster. (Three of those tight ends have less than five career catches)."

We at Horns Illustrated wish the best of luck to these guys on the upcoming NFL training camp. Hook 'em!