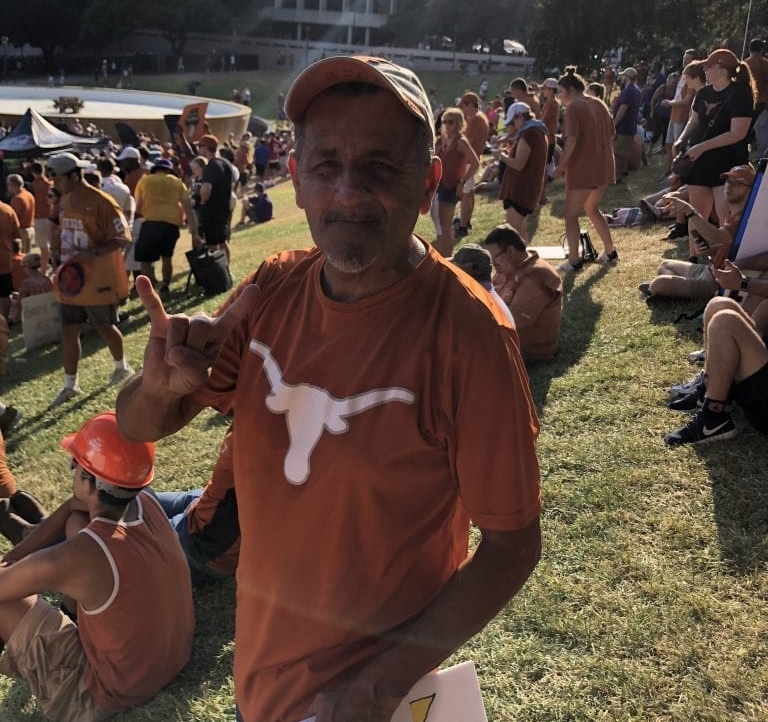 On the LBJ Lawn near the College Gameday set, Texas fan Manny throws up his horns (Photo: Riley Zayas)

Thousands of people were in attendance on the LBJ Lawn to watch and experience ESPN’s College GameDay before the much-anticipated matchup between Texas and their rivals to the east, LSU.

Die-hard fans were in attendance from many different schools, including BYU, North Carolina, and of course LSU, but none had as many supporters as the Longhorns, with fans decked out in the burnt orange and white. One of these was an old fan who goes by “Manny” and Horns Illustrated got the chance to catch up with him during the event.

Horns Illustrated: So how long have you been coming to Texas football games?

Manny: “Well, see all these gray hairs on my head? [Chuckle], I’m pretty old, I’ve been coming to games since the 1960s if you can believe it!”

Horns Illustrated: Is there a favorite Texas Sports memory that sticks out to you?

Manny: “Well there’s a million! But it’d probably have to be when Earl Campbell was a freshman [1974], and we were playing Oklahoma in the Red River Rivalry. We lost that game, 16-13, but it was hard-fought and pretty exciting.”

Horns Illustrated: I know you talked about Campbell, is there a current Longhorn player that you enjoy watching most?

Manny: “Well, Sam Ehlinger, Collin Johnson, or Keontay Ingram, just to name a few. Ingram’s the only running back we got right now.”

Horns Illustrated: Have you ever been to College Gameday before? What do you think of the
atmosphere?

Manny: “In all the years, I never went to a college gameday until today actually! The crowd and
the atmosphere are awesome. It’s pretty cool!”With fans like Manny behind the team, Texas is sure to give LSU a fight in Austin and maybe these fans will be the extra surge of energy the Horns need to get a statement win."