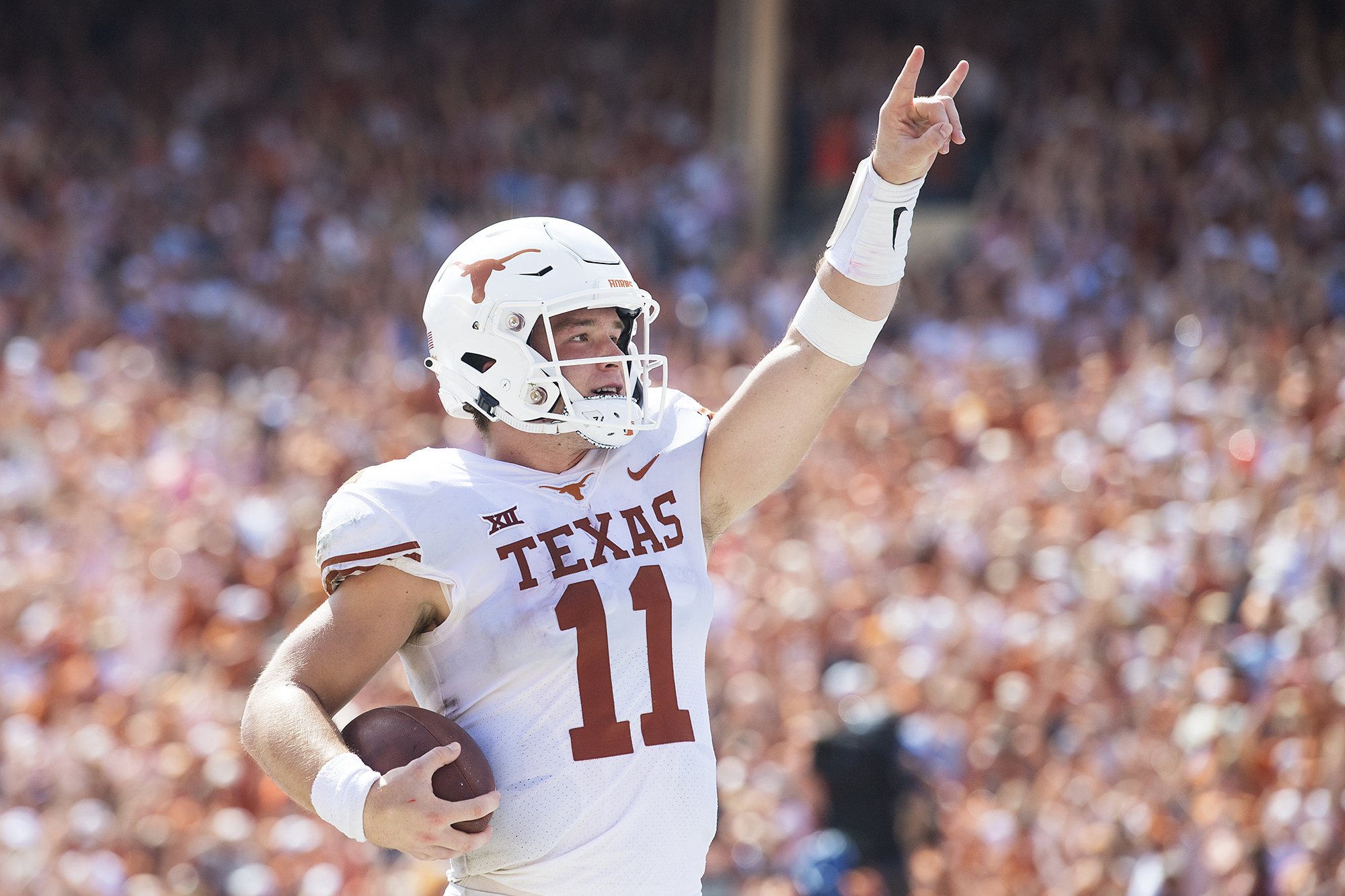 AUSTIN, Texas — The Texas Longhorns are this close to earning a berth in the Big 12 championship game, with a road win Friday over hapless — but improved — Kansas the only thing standing in the way of the Longhorns and trip to Arlington.

Of course, there was plenty on the line the last time Texas traveled to Lawrence, as well — mainly the continued employment on the 40 Acres for then-coach Charlie Strong. Things didn’t go as planned for the Longhorns that cold, blustery day, as the Jayhawks won in overtime and Strong, after a season-ending loss at home to TCU six days later, was sent packing.

Fast-forward to today, when the Longhorns (8-3 overall, 6-2 in Big 12 play) already have won more games than they have in a season since 2013 and are ranked at No. 11 in the country in this week’s Associated Press poll and No. 15 in the College Football Playoff rankings. Despite being an overwhelming favorite to clobber Kansas, the Ghost of Lawrence Past hangs over the Longhorns as an example of a situation when everything that could go wrong did.

Texas coach Tom Herman said Monday that he has not even considered using that loss to Kansas in 2016 as a motivational tool to make sure there’s not a repeat performance this season.

“I feel like that was 50 years ago, not two years ago,” Herman said during his regularly scheduled Monday media availability. “We're so far past that point in our program that, no, there is no hidden significance of it.

“Win or lose, regardless of opponent and regardless of venue, you have to move on. It requires a skill to make sure that you do it properly. There is no need for ‘closure.’ We’ve played a lot of football since then, and we've grown up a lot as a team.”

Texas handily beat a gritty Iowa State team last Saturday to put itself into the position to earn that spot in the league championship game, and did so by returning to the physical style of play that earned it a six-game winning streak earlier in the season.

“Iowa State, we feel like, is the second-most physical team in the Big 12,” Herman said while considering his own team the most physical. “So we knew we were going to have to match and or exceed their physicality to have a chance in that game.

“In the other games, the style that they play might lend itself for you to play a little differently, too. I'm not saying we will ever not play physical, but there is a little bit of both there. It was important for us to get back to playing ball the way that we've designed our program to play.”

Herman said that the shoulder injury suffered Saturday by quarterback Sam Ehlinger was a re-aggravation of the injury Ehlinger had about a month ago in the Baylor game, and was not as severe as the first.

“The MRI showed no broken bones, no separation, no ridiculous amount of damage,” Herman said. “It's angry. It's upset. The joint ... the shoulder is inflamed.”

Herman said he fully expects Ehlinger to start and play most of the game Friday against Kansas.

“We're going to play the best players, the players that give us the best chance to win, regardless of opponent,” Herman said. “Sam has earned the right that, if he is healthy, to start the game, he will. He's proven that he can win really big ballgames for us and perform that way, and we're going to need our best to win.

“We are very confident in (backup quarterback) Shane Buechele, but there is a reason that Sam Ehlinger is our starting quarterback. If our best is healthy, we're going to play our best.”

Other items addressed Monday included:
• A change in practice routine for the week, based on the fact that the Iowa State game was so physical and that because of the short preparation time heading into the Kansas game Friday morning.

“We won't approach the game any differently, but we will approach practice differently,” Herman said. “Yesterday's practice, instead of a normal Sunday, which is helmets and the little shoulder pads, was a walk-through with no helmets and tennis shoes. (Monday) will be full pads. We need it, and we need to continue to tackle. You saw the benefit of that from our defense from going full pads the week prior, but we will be on the field less.

“Monday we will be on the field, what would it be, hour and 15 minutes and Tuesday about an hour, Wednesday probably fifty minutes to an hour.”

• An updated injury report that was all very good for the Longhorns. “Injury-wise, obviously we’re pretty banged up but nothing too serious,” Herman said. “Chris Nelson has a knee contusion; he will be fine. Kris Boyd, knee contusion. Tre Watson's hip contusion is bothering him but it should work itself out by the end of the week.”

• When Herman was asked to grade himself as a coach after just four seasons as a head man, he said he would give himself an “incomplete. I'll grade myself as a head coach when I retire.”

• In a repeat of a question from Big 12 media days, Herman was asked how many elite players he thought the Longhorns have on their roster. He responded, again, that he doesn’t keep a running tally of elite players.

“We've got enough to win the amount of games that we've won,” he said. “Who has come the farthest? Whew, I would say our offensive line. We have stayed relatively consistent up there, too, which is a big, big part of it. I think Charles (Omenihu’s) game has steadily improved over the course of the year, and our quarterback has certainly improved from week one to now.”

• Texas has been ranked for nine consecutive weeks, its longest stretch since being ranked in 162 straight polls from 2000-10.