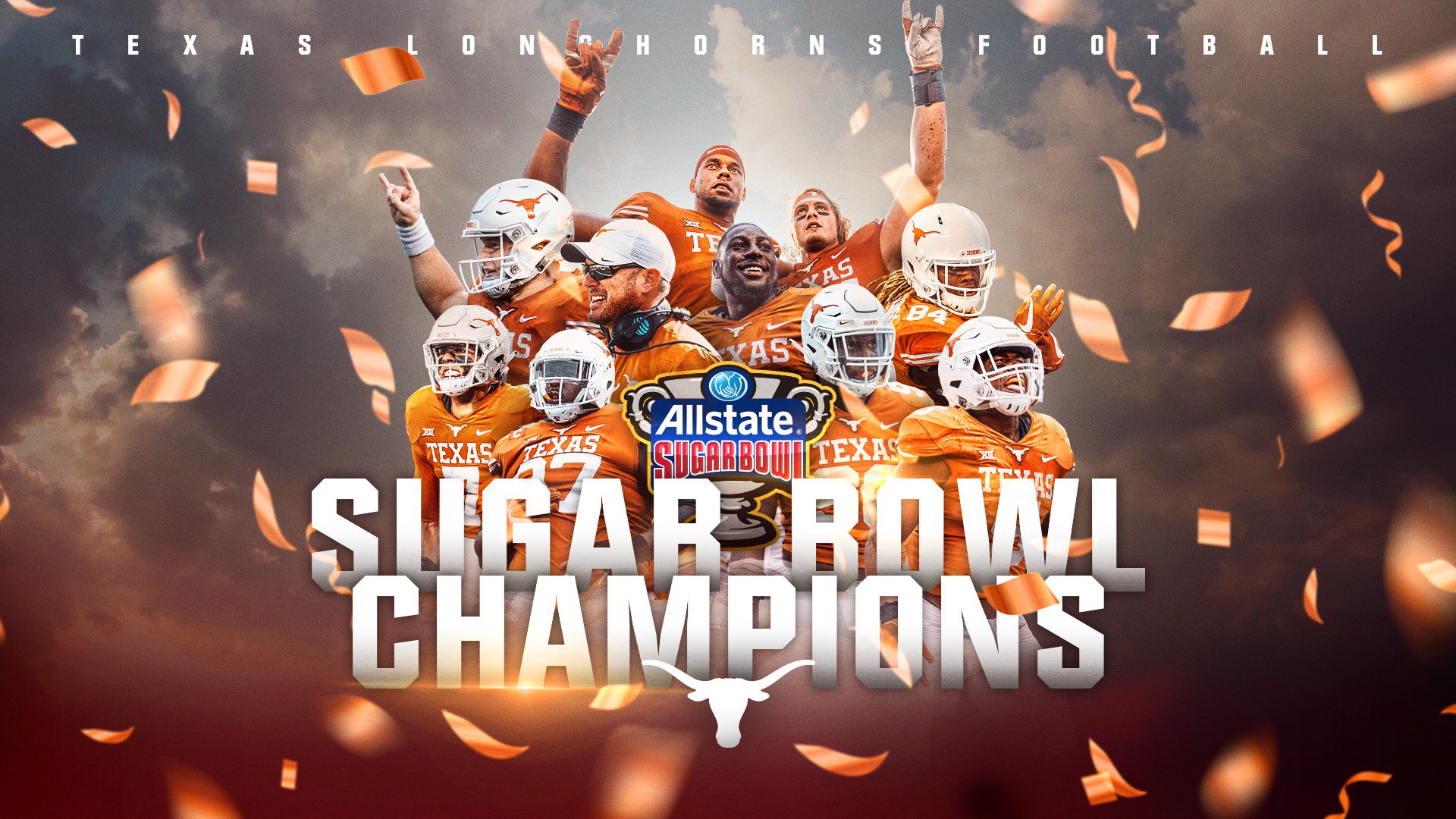 NEW ORLEANS, La. – Confetti fell from upper reaches of the cavernous Mercedes-Benz Superdome onto the heads of the victorious 15th-ranked Texas Longhorns on Tuesday, as the team and their fans celebrated their 28-21 win over No. 5 Georgia in the 85th Allstate Sugar Bowl.

It seems like an eon since a similar scene took place some 1,900 miles to the west in the National Championship game at the Rose Bowl, but it was only 13 years ago.

Now a nation of long-suffering Longhorns followers can see that that there is finally light – and bright one, at that – at the end of a lengthy tunnel.

If (when?) Texas starts playing for national titles again, it will look back at the 2018 season and this game as components that surely placed it on the correct track, and that quarterback Sam Ehlinger was the catalyst.

Ehlinger rushed for 64 yards and three touchdowns and passed for 169 additional yards as the underdog Longhorns went toe-to-toe with physical Georgia, eschewing the flashy downfield passing attack prevalent in the Big 12 Conference and beating the Bulldogs at their own smash-mouth Southeastern Conference-style game, on both sides of the ball.

Grabbing the game by the 'Horns' 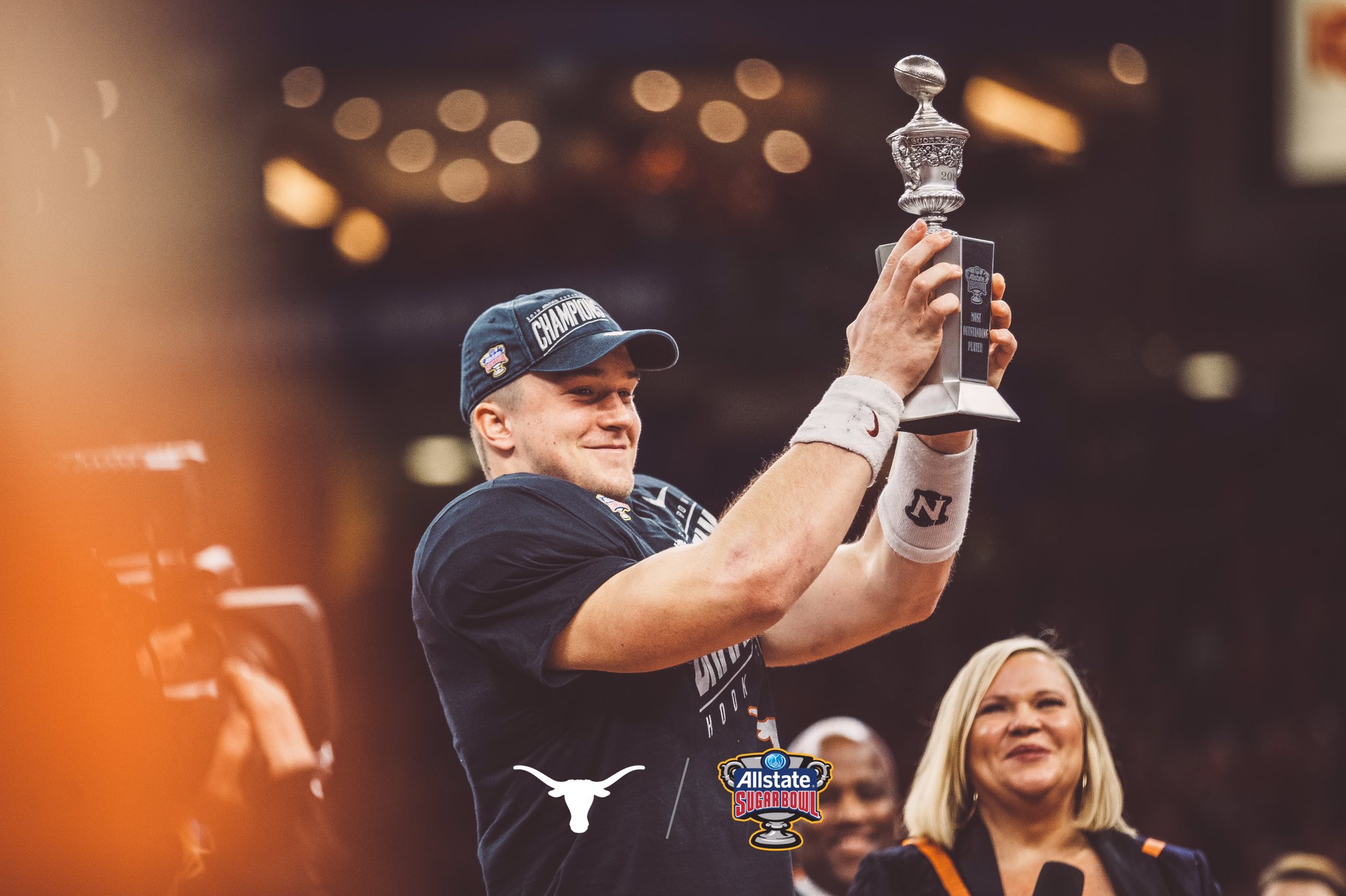 “I’m just really proud of the physical nature in which we played this game," Texas coach Tom Herman said. “At this point in our program's trajectory, that's what we're going to need to do to win, is we have got to out hustle people, we've got to out hit people. And tonight I feel like we did that.”

Ehlinger’s gritty ground game produced touchdowns on runs of 2, 9 and 1 yards, with two of the scores coming at the end of lengthy, time-consuming drives.

It’s the first time Texas (10-4) has won 10 games in a season since it captured 13 in 2009 before losing to Alabama in the National Championship game. The Longhorns had at least 10 wins for nine straight years from 2001-09.

From the podium in the postgame celebration, Ehlinger stoked the passion of Longhorn Nation by proclaiming “we’re back.”

Herman, per the party line, wouldn’t take the bait when asked if his program is back.

“I don't ever want to give any kind of finality to where we're at because we are always making progress," Herman said. “We lost in Dallas (in the Big 12 Championship) a month ago, and it left a really bad taste in our mouth. To beat such a quality opponent tonight the way that we did it and to do it on this kind of stage in the Sugar Bowl certainly leads me to believe that we're headed in the right direction.”

Georgia (11-3) started slow and could never find a way to solve Ehlinger and the Longhorns. Quarterback Jake Fromm passed for 212 yards and three touchdowns, but was intercepted once, sacked twice and was under constant duress from the Texas pass rush.

Tre Watson added 91 yards on 18 carries for the Longhorns, who outgained Georgia 355-284 and enjoyed a 180-72 advantage on the ground. The Bulldogs were averaging 251.1 rushing yards per game.

“When Texas has had to play physical, they’ve played physical,” Georgia coach Kirby Smart said after the game. “They did a good job of that. Their quarterback managed the game well with his quarterback run play. He really hurt us. We missed tackles and didn't finish on him defensively. And then we weren't really able to run the ball like we like to consistently.”

Texas rolled down the field on the game’s opening drive, marching 75 yards in 10 plays to Ehlinger’s 2-yard touchdown run. The Longhorns converted two third downs on the drive, including one on a 8-yard pass to Lil’Jordan Humphrey to the UGA 2-yard-line when they needed eight yards to keep the march alive.

The Longhorns then got a huge break when Georgia punter Jake Camarda’s knee touched the turf as he received a low snap from center, giving Texas the ball as the UGA 27. Three conservative play calls netted the Longhorns eight yards and set the table for a 37-yard field goal by Cameron Dicker and a 10-0 Texas lead with 6:05 to play in the first quarter.

Texas made its own break late in the first quarter when Ta’Quon Graham stripped the ball from Georgia running back D’Andre Swift and Gerald Wilbon fell on the fumble at the UGA 12. Ehlinger avoided a sack and juked his way up the middle for a 9-yard TD run three plays later to give the Longhorns a 17-0 lead just seven seconds into the second quarter.

Georgia finally woke up and found its offense, using 12 plays to march 75 yards to a pass from Fromm to Brian Herrien for a 17-yard TD that cut the Longhorns’ advantage to 17-7 with 9:03 to play in the second quarter. Like Texas had done before, the Bulldogs converted two big third downs on the drive, most notably a 12-yard pass to Riley Ridley when the needed 11 yards at the UT 29.

The Longhorns pushed around Georgia in a scoreless third quarter, moving to the UGA 11 on its final play on a Ehlinger 2-yard run that converted a fourth down. It took seven more Ehlinger runs to punch the ball in the end zone, with the tough-as-nails signalcaller just bulling over from the UGA 1 on fourth down for the TD.

Ehlinger then passed to Collin Johnson for a two-point conversion that granted Texas a 28-7 lead with 11:49 to play.

“That mindset and the physicality and the whatever-it-takes and the fourth and inches is the mindset that our offense needs to have, that our team needs to have every single play,” Ehlinger said. “And I'm going do everything that I can for my team to put them in the best situation to win.

“Thank you for giving me the ball. I wouldn't want it any other way." 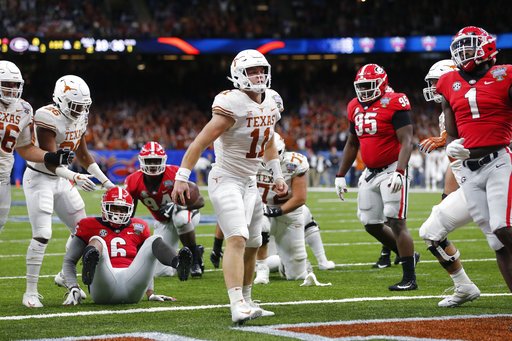 Georgia drove 67 yards in just six plays to cut the lead to 28-14 as Fromm hit Mecole Hardman on a 3-yard scoring toss one play after a 31-yard hookup with Jeremiah Holloman.

Fromm connected with D’Andre Swift for window-dressing 5-yard TD pass with 14 seconds to play but it was far too little too late for the Bulldogs.

“We had the ball for 12 minutes in the fourth quarter – 12 of the 15 minutes,” Herman said. “Our offense did a great job of getting first downs and milking the clock down with a lead. And our offense played a part in playing great defense as well.”

Defensive end Charles Omenihu, who had two tackles in his final college game — both of them for losses — said he wished he could stay and play another year with his teammates.

“This win is an up-arrow for this program,” Omenihu said. “These guys are led by amazing men and amazing coaches. And to have a leader like Sam that is going to continue to lead these guys in the off season, to make them not as satisfied for this, because this ain't the end goal for this university. I know that this football team and this program is in the greatest of hands.”