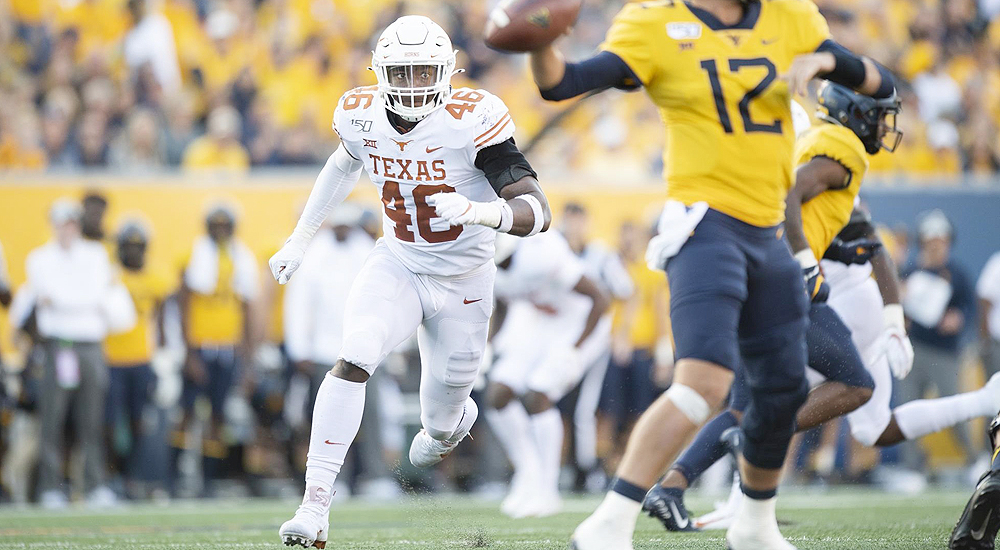 Moving to the hybrid JACK position when Texas football returns will allow Joseph Ossai to drop into coverage once in a while but spend much of his time rushing opposing passers (photo courtesy of texassports.com).

AUSTIN, Texas — Ask casual fans what they remember about the 38-10 Texas win over Utah in last season’s Valero Alamo Bowl, and those fans can be forgiven if the first name that comes up is that of Sam Ehlinger — after all, the UT quarterback did throw for three touchdowns and run for another in the Longhorns’ upset of the No. 11 Utes.

But a valid argument could be made that Ehlinger was not the most impressive player with a Longhorn logo on his helmet in that game — after all, while he found the end zone with three passes, he did so while throwing for a fairly modest 201 yards. On the other side of the ball, Joseph Ossai was a human highlight reel, leading the UT defense with nine tackles, six tackles for loss and three sacks.

Ehlinger won the game’s Offensive MVP Award, while Ossai claimed the defensive version of the honor. 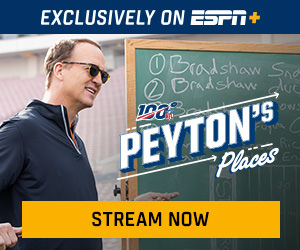 After spending the season at outside linebacker, Ossai moved around in the Alamo Bowl, turning in a performance so impressive that new defensive coordinator Chris Ash is moving Ossai to a new position in order to take advantage of the versatile defender’s multiple skills. Heading into his junior season, Ossai will move full-time to the JACK position, a hybrid linebacker/defensive end spot in which he can move around to create mismatches, rushing the passer much of the time, but also dropping into coverage when the situation calls for it.

So dominant was Ossai in the win over Utah that some wrote it off as a once-in-a-life-time performance. But the junior-to-be has other ideas. He said the position switch should allow him to make plays, and improve the defense overall.

“Obviously I’d like to always replicate the Alamo Bowl, and even top it sometimes,” he said in a video interview earlier this week. “I think the new coaches — they’ve brought new ideas, a brand new way of seeing … of looking at things with the defense. We’re all getting excited about it — we are. We can’t stop talking about it in group texts, in group chats — all of that. We’re excited to play when they do allow us to play. But I think fans can expect to see us more explosive on the d-line — that’s one thing we struggled at last year, and we want to be better this year at that.

Since he committed to Texas in 2018, Ossai has strapped an additional 35 pounds, now carrying 255 pounds on his 6-4 frame, offering a prototypical blend of size and speed. His newfound size allows him to play with his hand down and take on offensive linemen while retaining the speed to rush off the edge or drop into coverage. That combination, he said, allows him to fill a variety of roles for the Longhorns.

“My body length is … my body type … I don’t like to limit myself to one position,” Ossai said. “Me, just being competitive, I feel I can play any position on the field. My body type, obviously, is more of a outside linebacker, more of a on-the-line guy, so I just want to use my strengths, I want to use my length. I want to use my abilities to help the team as much as I can. If that’s staying on the line and working a lot more rush … working a lot more edge-setting, that’s what I’m prepared to do, and that’s what I would want to do.”

Performances like the one Ossai turned in against the Utes sent expectations for next season soaring. Now one of the veterans on the defense, Ossai said he is among those being counted upon to play a larger role off the field, as well as on it. Defensive lineman Malcolm Roach, one of the vocal leaders of last year’s defense, is hoping to make the New Orleans Saints’ roster as an undrafted free agent, leaving a leadership void that must be filled. Ossai said he doesn’t feel obligated to replace Roach in that manner … but is sure he can.