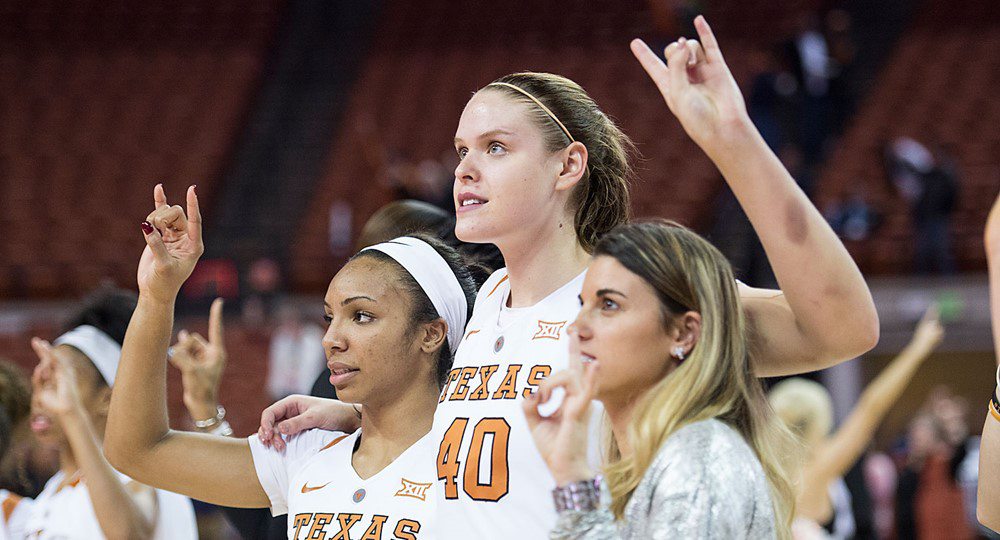 Senior center Kelsey Lang (40) averaged a double-double while helping to lead the University of Texas women's basketball team to back-to-back victories over Oklahoma State and Kansas State, earning a share of the Big 12 Player of the Week award (photo courtesy of texassports.com).

AUSTIN, Texas — Senior center Kelsey Lang and freshman guard/forward Joyner Holmes were honored Monday by the Big 12: Lang was named co-Player of the Week, sharing the honor with Iowa State’s Bridget Carleton, while Holmes was tabbed as the league’s Freshman of the Week for the fourth time this season and third week in a row.

Lang averaged a double-double in wins over Oklahoma State and Kansas State, putting up 15.5 points per game and pulling down 10.5 rebounds in the two games. She also blocked seven shots, hit 60.9 percent of her field goals over the two games and became the 41st player in UT history to eclipse the 1,000-point plateau in her career. Her 160 career blocked shots are the seventh-highest total in program history.

Holmes led the Texas offense against OSU and KSU, averaging 16.5 points per game in the victories, while pulling down 7.0 rebounds per game. She also blocked three shots and had three steals over the two-game span.