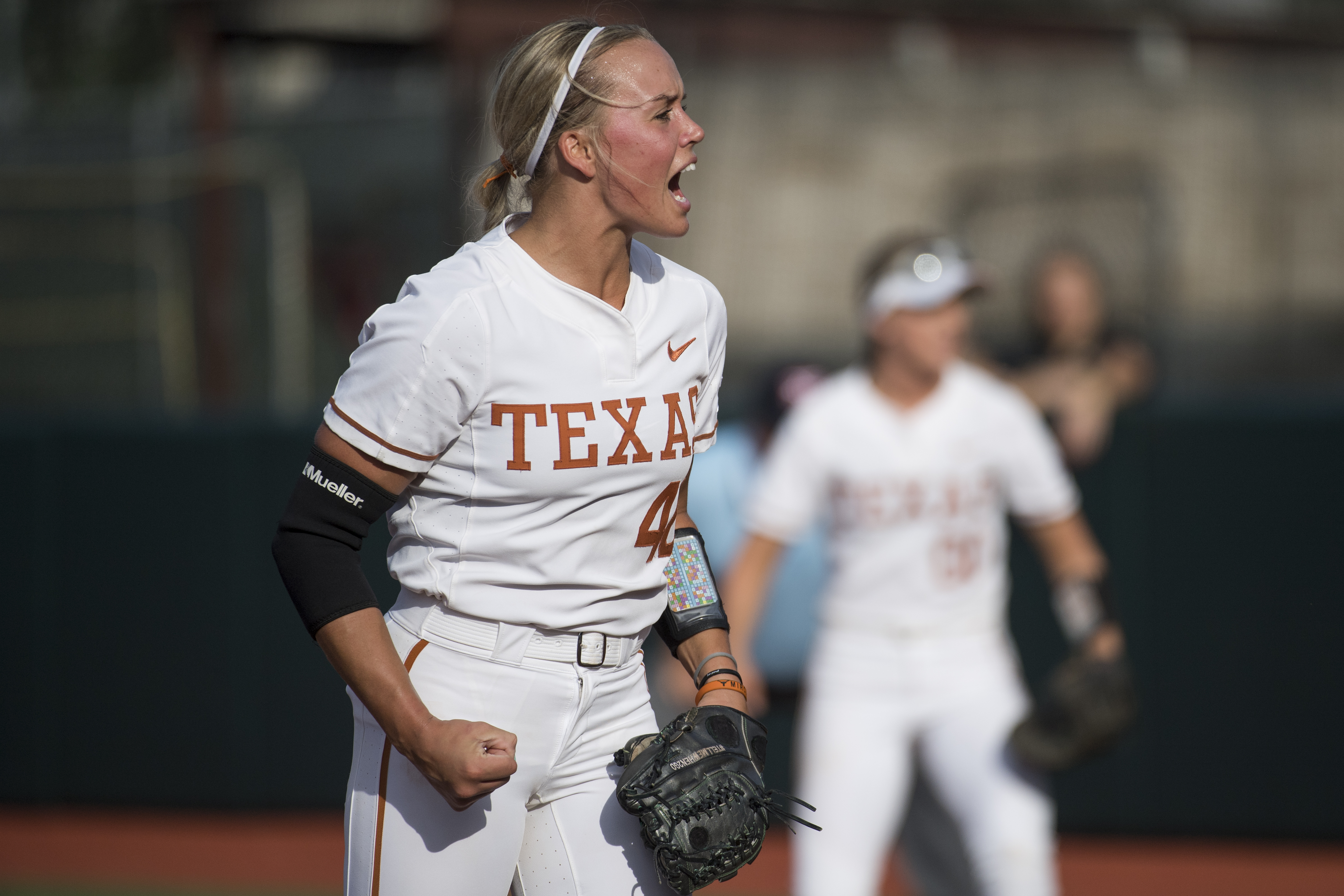 Miranda Elish is one of 3 Longhorns to land NFCA All-Central Region honors this season (Photo courtesy of Texas Sports).

Home is where the Horns are as the NCAA Tournament gets underway, as the Texas softball team is set to host a NCAA Regional this weekend for the first time since 2013.

The No. 9 Longhorns (41-14 overall) boast a great record at their home of Red and Charline McCombs Field, where they are 23-5, and Texas will look to move on past the regional round starting Friday as Southland Conference champ Sam Houston State, along with SEC squad Texas A&M and AAC’s Houston come to Austin for the weekend regional tourney.

Texas plays Sam Houston State (34-21) in the afternoon game Friday at 4:30 p.m. with hopes of advancing on with a win. Houston (37-17) and Texas A&M (28-25) play earlier in the day squaring off at 1 p.m. in Austin.
From there the games are yet to be determined for Saturday and Sunday depending on the results of Friday’s contests.

Elish earned first team honors as she dished on the mound and at the plate this season. She leads the Texas squad in wins with 14 and shutouts at nine on the season. She also holds the Big 12 lead in strikeouts with 191 punchouts on the year.

On top of that, the junior righthander is hitting .322 with 25 RBIs and 15 extra-base hits on the season.

Iakopo raked at the plate this season, leading Texas in home runs, RBIs, slugging percentage, total bases and on-base percentage. All the while, her performance this season gave her the ninth best batting average in the Big 12 Conference. 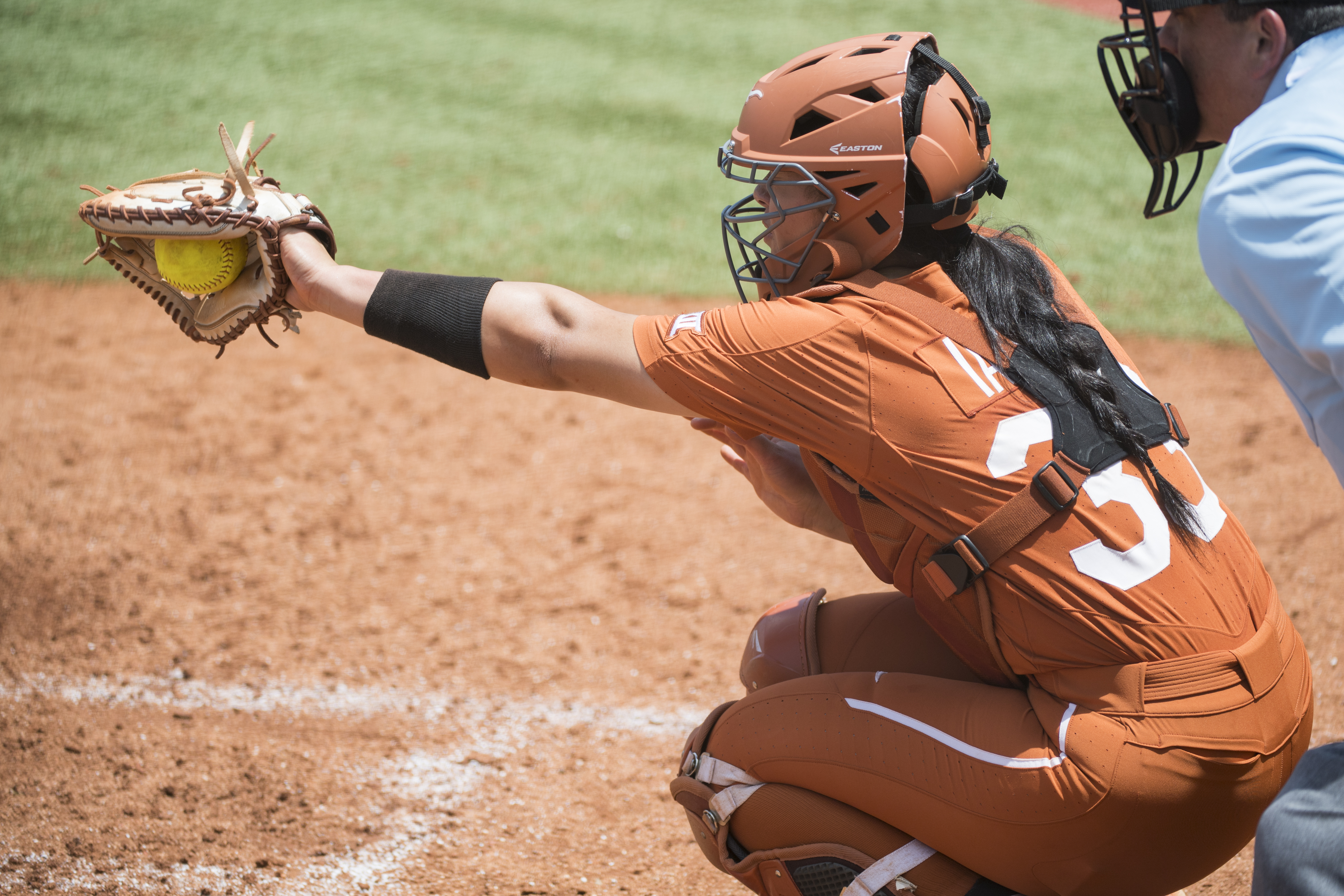 Mary Iakopo is a force behind the plate and at the plate (Photo courtesy of Texas Sports).

The sophomore Texas catcher reached base in a staggering 46 out of 53 games as she earned NFCA first team honors. 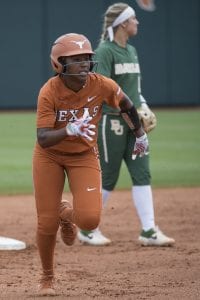 Jefferson meanwhile finished the regular season with the third-best batting average and hits in the Big 12 at .412 and 70, respectively. There were a mere eight games that she did not reach base as the sophomore got on base in 46 of the 54 games she played this year.

She also led the squad with 22 multi-hit games — including five three-hit contests.

Tickets for the NCAA Regional general admission tickets ($10 - adult, $7 - youth/senior) are on sale now. Fans can purchase by calling Ticket Sales & Service at 512-471-3333, by visiting the Sandeep Soni Bellmont Ticket Office (located on the west side of Darrell K Royal-Texas Memorial Stadium) weekdays from 9 a.m.-5 p.m. CT or online here.

The Austin Regional winner will go on to play the winner of the Tuscaloosa Regional, where No. 8 national seed Alabama is hosting Arizona State, Lipscomb and Alabama State.