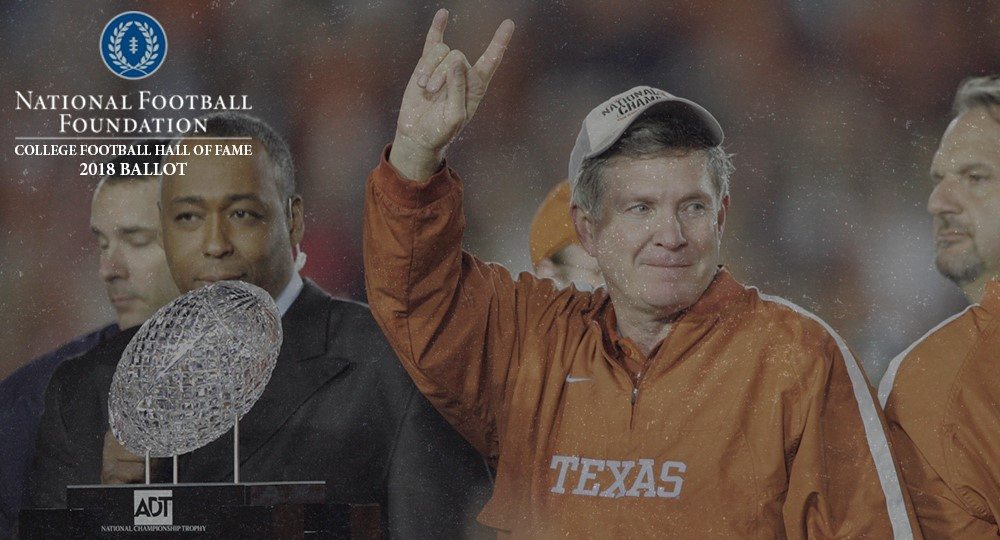 IRVING, Texas – Legendary Texas head football coach Mack Brown will be on the 2018 College Football Hall of Fame ballot, the National Football Foundation and College Hall of Fame announced Thursday. Brown is one of six coaches for the NCAA Football Bowl Subdivision to appear on the 2018 ballot. In total, the ballot will include 75 players and six coaches from the FBS and 98 players and 31 coaches from the NCAA divisional and NAIA ranks.

Brown compiled a career coaching record of 244-122-1 (.666) in 30 seasons as a head coach at Texas, North Carolina, Tulane and Appalachian State. The 244 wins are the 10th most in NCAA history by a coach with at least 10 years at an FBS school. When he left Texas, he was one of only two coaches nationally at the time to have directed teams to 21 bowls in the last 22 seasons and the only one to have 23 winning seasons in his last 24 years. His 225 wins overall from 1990 to 2013 were the most nationally.

Brown lifted a UT program that managed at least 10 wins just three times in the 16 years prior to his arrival in 1998, but did so nine times in his 16 seasons with the Longhorns. That included a streak of nine straight 10-win seasons that is tied for the second-longest such streak in NCAA history. He also led the Longhorns to a school-best 12 straight nine-win seasons and six seasons of at least 11 wins.

Under Brown, Texas won nine of its last 12 bowl games during his tenure and had a 10-5 record overall, including a UT record streak of 12 consecutive bowl appearances. The 10 bowl wins give Brown the most in Texas history, surpassing Royal's eight. In addition, the streak includes a BCS National Championship, another BCS National Championship Game appearance and three BCS bowl wins. 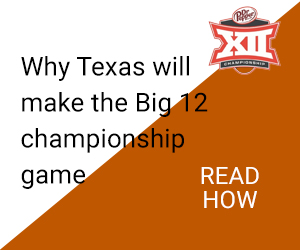 With all of the success on the field, the primary emphasis remained the same with Brown's squads — maintaining a high level of achievement in the classroom and in the community. Eighty percent of his players at North Carolina received their degrees and he increased the pace at Texas, while more than a third of his players at Texas regularly earned 3.0 grade point averages and achieved spots on the Big 12 Commissioner's and Athletics Director's honor rolls.

Over his final seven years, the success in the classroom reached an all-time high. The Longhorns led the Big 12 in academic all-conference selections in five of his last eight seasons. From 2006-13, UT totaled a league-best 159 Academic All-Big 12 selections, while Kansas was second with 124.

Mack and Sally Brown's efforts in the community have been significant, as well, with the couple having earned numerous honors for their good works in addition to having served on several charitable boards. Most notable of their current endeavors is a lead role in the annual Mack, Jack & McConaughey event each spring in Austin. MJ&M is a joint fundraising effort in combination with Academy Award-winning actor Matthew McConaughey and ACM Award-winning recording artist Jack Ingram. Since the two-day event launched in 2013, the nonprofit has given over $5 million to charitable organizations like CureDuchene, Dell Children's Medical Center, HeartGift, just keep livin foundation and The Rise School of Austin.

To be eligible for the ballot, coaches must have coached a minimum of 10 years and 100 games as a head coach; won at least 60 percent of their games; and be retired from coaching for at least three full seasons.

The ballot will be sent to more than 12,000 NFF members and current Hall of Famers whose votes will be tabulated and submitted to the NFF's Honors Courts, which deliberate and select the class. The FBS Honors Court, chaired by NF Board Member and College Football Hall of Famer Archie Griffin, include an elite and geographically diverse pool of athletic administrators, Hall of Famers and members of the media.