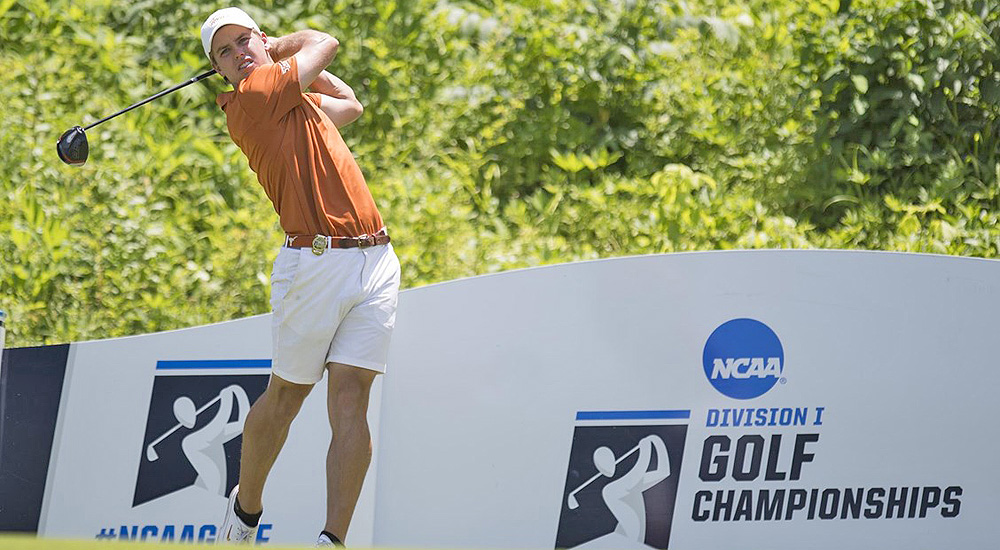 Freshman Parker Coody picked up one of two University of Texas wins as the Longhorns fell, 3 and 2, to Stanford in the NCAA Championship final (photo courtesy of texassports.com).

FAYETTEVILLE, Ark. — Say what you will about the way the University of Texas men's golf team played Wednesday as a team against Stanford in the title match of the NCAA Golf Championship, but remember this: the Longhorns have served notice, again, that they can go toe-to-toe with anyone in the country at any time and win most of those battles.

The Longhorns fell to Stanford in final match, losing 3 and 2 at the über-demanding Blessings Golf Club in Fayetteville, Arkansas. Texas couldn’t muster the Cardinal’s firepower and superb across-the-board shotmaking in the championship five-on-five showdown, and finished as runner-up for the second time in this event in the past four years.

“It wasn't hard to get up this morning,” Texas coach John Fields said. “We were excited to play. We knew it was going to be a challenge, and we knew that Stanford would come as excited as we were, and that they would play their best golf. We were going to have to play ours to win this tournament. They got the better of us this time.”

Maybe the talented UT lineup, which featured a senior, a junior and three freshman, just flat ran out of steam as it ran out of holes. Or maybe the Cardinal produced what every team wanted to that came to northwest Arkansas with championship aspirations: putting everything together at just the right time in the face of a daunting opponent.

That’s what Texas was able to accomplish just to reach the championship match.

The Longhorns finished tied with Oklahoma for fourth at the conclusion of four days of medal play. Texas beat the Sooners, the 2017 national champions, 3 and 2, Tuesday morning as freshman Parker Coody clinched the deciding point in the morning’s final match.

In the afternoon semifinals, Texas took down top seed and defending national champion Oklahoma State, 3 and 2, when senior Steven Chervony canned a 15-foot birdie putt to send his match into extra holes and won when the Cowboys’ Zach Bauchou lipped out a putt on the 19th hole to deny Oklahoma State a chance at a repeat title.

“Beating Oklahoma State was unbelievable,” Texas freshman Cole Hammer said. “We definitely weren't favored, and the way it all went down it definitely took a lot of energy out of us. But there's no reason that that carried over to today.”

The competition moved to Wednesday morning to avoid storms that were forecast to hit the area later in the day, denying the Longhorns some needed rest after their two grueling matches the day before.

“I don't think it was much of a reset,” Chervony said. “It almost felt like as soon as we walked off the course yesterday we were back here playing because it was such a quick turnaround. So we were ready to go. We were energized. We got off to a great start — just didn't go our way.”

Stanford arrived in Arkansas as the nation’s hottest team on the heels of five consecutive victories, claiming the Pac-12, NCAA Stanford Regional and NCAA titles. The Longhorns took charge early before the Cardinal seized control as the matches reached the turn and kept the pressure on the Longhorns by hitting fairways, greens and key putts.

Henry Shimp, a junior, clinched the trophy for the Cardinal. With two points already on the board, Shimp hit a clutch 9-iron approach shot within three feet of the cup at 16 and made birdie to take a 2-up lead against Texas junior Spencer Soosman.

On 17, Shimp two-putted for par from 20 feet to win the match, setting off a celebration with his teammates on the par-3 green.

Salinda and Wu were unbeaten in three matches to lead Stanford to the title, its ninth in history and first since 2007.

Salinda concluded his collegiate career with a bang in his win over Hammer. Salinda entered this national championship with an individual victory in the Stanford Regional and a sixth-place finish in the NCAA individual earlier this week and was nearly flawless Wednesday.

“Starting on the back nine is when I really started to hit it well, won 10 and 11 from there (and was) able to put the pressure on,” Salinda said. “I wanted to play (Hammer) really bad. I have the most respect for his game. He’s one of the best players in college as a freshman. It was fun to go against him and (I was) happy to come out on top.”

UT's points in the final were earned by Parker Coody, 6 and 5, over the Cardinal’s Daulet Tuleubayev, and by Chervony, 1 up, against David Snyder in a match that ended on the 15th hole when the Cardinal earned its third and match-clinching point.

“Our team did a great job this year: five runner-up finishes and great fields at tournaments that we play in and then finishing up with a 20-shot victory at our home in the regional, and bringing that momentum here,” Fields said. “Then obviously finishing runner-up here — there's a lot of teams in Div. I golf that would love to be in our position right now.

“Moving forward, our team is in great position to capitalize on this momentum, and — who knows? — maybe be one of the favorites coming in (next year). That will be a little bit different feeling.”