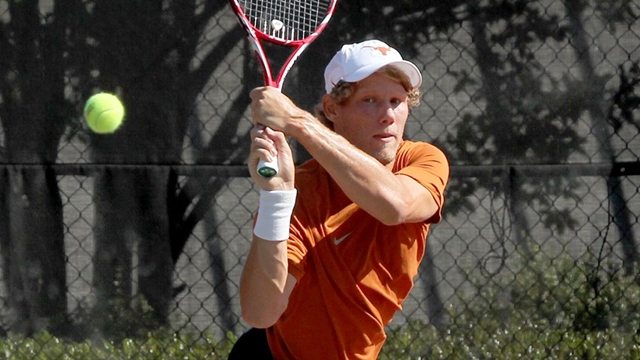 ATHENS, Ga. – The University of Texas defeated California in the NCAA Men's Tennis Championship on Friday afternoon at Dan Magill Tennis Complex, 4-1. The ninth-ranked Longhorns (23-5) advance to the NCAA Championship Quarterfinals to face top-seeded USC on Sunday at 11 a.m. Central in Athens, Georgia.

"We feel like we're playing our best tennis," head coach Michael Center said. "We worked hard all year to prepare ourselves to play our best tennis right now, so we will be ready to go and we are excited about the opportunity."

It marked the second time Texas defeated Cal this season, including a 4-2 Longhorn victory in the consolation round of the ITA National Men's Team Indoor Championship in Houston on Feb. 16.

On Friday, Texas picked up the doubles point with wins at position Nos. 1 and 2. At No. 2 doubles, Adrien Berkowicz and George Goldhoff cruised to an 8-1 victory against Cal's 86th-ranked Andre Goransson and Ben McLachlan. Texas' 16th-ranked Lloyd Glasspoll and Soren Hess-Olesen clinched the doubles point by picking up their 11th win over a ranked doubles team this season, defeating 28th-ranked Gregory Bayane and Chase Melton, 8-3.

"Cal really handled us in doubles when we played them in February, so to come out and play doubles like that today was tremendous," Center said. "It was a great start for our guys, we got the matches pretty comfortably at one and six but the other four matches were really up in the air. We were hanging on there a little bit in that fourth point, but we talked about these matches. Everybody is good and there's going to be some ebbs and flows. Cal did not go away today they kept battling."

Junior All-American Soren Hess-Olesen won his 10th consecutive singles match by defeating Cal's 55th-ranked Ben McLachlan 6-4, 6-3, at No. 1 singles. The Big 12 Player of the Year improves to 19-2 during dual match play, including 14 wins against ranked opponents.

Junior Clement Homs gave the Longhorns a 3-0 team advantage with a win at No. 6 singles. Homs defeated Cal's Nikhil Jayashankar 6-1, 6-2, for his first win since a 13-match winning streak from Jan. 7 to May 5.

With the Bears nipping at the Longhorns' tail -- picking up a point at No. 3 singles and winning first sets on court Nos. 2 and 5 -- freshman George Goldhoff provided UT's match-clinching point for the second time in the NCAA tournament action (also in the first round against Marist).

Goldhoff weathered a two-break deficit at 3-1 to win the first set, 7-5, against Cal's Andre Goransson. The ITA Texas Region Rookie Player of the Year followed with 6-3 second-set victory to clinch the match.

"It was a really tough match because I was down in both sets," Goldhoff said. "I was always playing from behind, but felt like I was in control of the points. So if I played smart I could come back and that's what happened."

Texas advances to the NCAA round of eight for the 11th time overall and the first time since 2009. It marks the fourth squad that coach Center has guided to the NCAA Championship Quaterfinals or beyond at Texas.

Live scoring and live video streaming of Sunday's NCAA Championship Quarterfinal match between No. 9 Texas and No. 1 USC (11 a.m. CT) will be available on GeorgiaDogs.com.

NCAA Championship Round of 16
McWhorter Courts at Dan Magill Tennis Complex
T-2:38 A-176