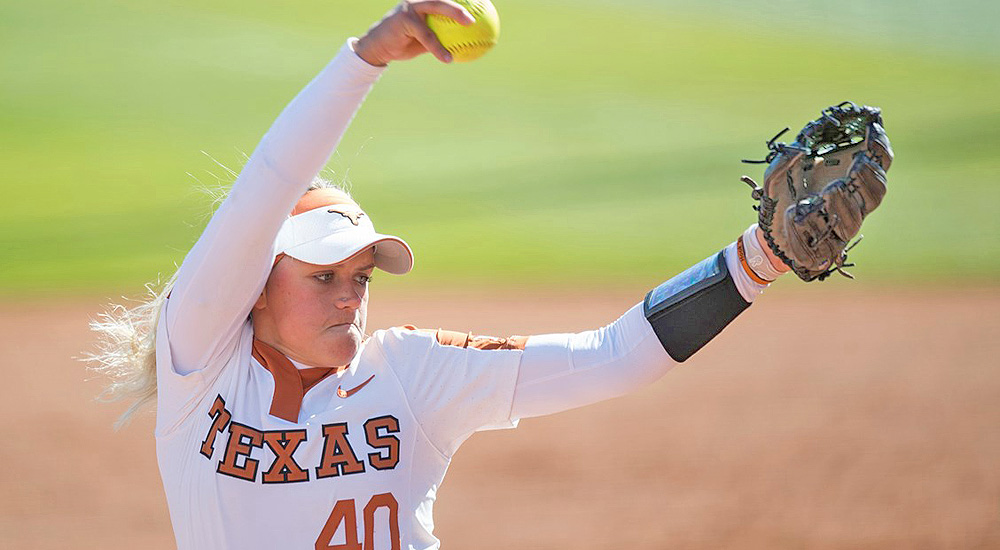 Junior pitcher Miranda Elish has had a stellar season for the Longhorns in her first year since following her coach, Mike White, from the University of Oregon to the University of Texas (photo courtesy of texassports.com).

OKLAHOMA CITY, Okla. — Miranda Elish is right where she wants to be even though it’s 2,100 miles southeast of where she was at this time last year.

It has been a huge change for the Texas junior righthanded pitcher/designated player, but one in which Elish has succeeded over the five months since she left Eugene, Oregon for a fresh start in Austin under her former coach with her first college team, the Oregon Ducks.

Elish will be counted on to carry the bulk of the load for the eighth-ranked Longhorns in the postseason, beginning Friday when she heads to the circle to throw the first pitch against No. 14 Oklahoma State in the Big 12 Championship in Oklahoma City.

That game will be the first of two Friday in Pool B of the postseason tournament; the Longhorns will square off against Iowa State in the second.

Texas heads to the postseason on the heels of eight wins in its past 11 games, including four victories in a row. It will be up to Elish, who garnered first-team All-Big 12 honors Wednesday, to help the Longhorns continue riding the wave they have caught in recent weeks.

“We like that we have some momentum heading into this tournament but I also know that I, and the team as a whole, has not yet played its best,” Elish said. “We have been working our butts off to get ready for the postseason, and I understand what’s being asked of me.”

Elish has been UT's top pitcher this season, forging a 14-8 record and a 1.71 earned run average while leading the Big 12 in strikeouts (188) and complete games (15). Her production in 2019 is great, but pales in comparison from her numbers from a year ago, when Elish went 25-2 with a 1.20 ERA and was named a second-team All-America after her sophomore season at Oregon.

In April 2018, Elish had the first seven-inning perfect game in Ducks history, against Portland State, and in her two seasons at Oregon, she went 37-2 with a 1.42 ERA. Combining her stints at Oregon and Texas, Elish, a power pitcher with three solid options, now has more than 500 career strikeouts.

Elish, who hails from Crown Point, Indiana, transferred to Texas at the first of the year to play for coach Mike White, who took over the Longhorns’ program last fall after spending nine seasons in Eugene.

“Miranda is the same pitcher she was last season and is significantly better in just about every way,” White said. “It took her a while to get going this year because of an ankle injury and the fact we weren’t able to work with her until the spring because she was still in Oregon. But she’s found her stride and will be the horse we count on through the postseason.”

Elish also can do some damage at the plate, hitting .330 this year with six homers, 25 runs batted in and 21 runs scored.

“I like to both pitch and hit, and I use one to help me pick up my game when I’m struggling in the other,” Elish said. “It’s all about what I can do to help the team. We are determined to make things happen this postseason and are in a good spot to be successful.”

But the Longhorns (41-12) are not reliant only on the prowess of their star pitcher. Sophomore second baseman Janae Jefferson, who leads the team with a .415 batting average and 35 runs, was also voted to the All-Big 12 First Team, earning the honor for the second straight year.

O’Leary was a unanimous selection to the Big 12’s All-Freshman team, thanks to a nation-leading 0.48 ERA that included a perfect game March 27 against Baylor. Washington is on the all-conference team for the third straight year, and Iakopo, who also transferred to Texas from Oregon, is hitting .374, and her nine homers are the most for a Longhorn since 2016.

Texas has won at least 40 games for the first time since 2013 and is seeking its first berth in the College World Series in six seasons.

“We know what we have in Miranda and Janae and Mary, but now we are just looking for someone else to get hot and help us through the postseason,” White said. “We are very happy about the way we’ve played getting to this point, but we know this story is still waiting to be written.”