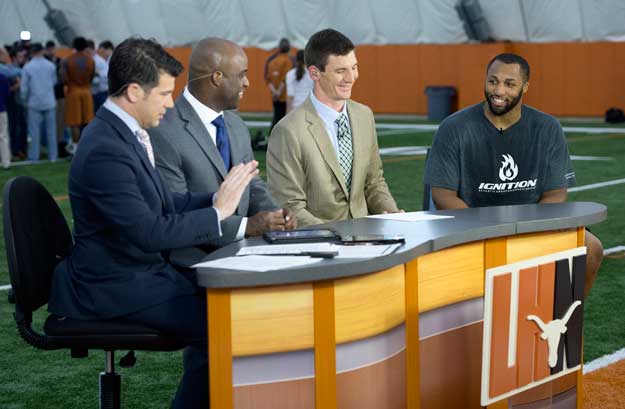 AS A FORMER NFL athlete who has experienced the draft process in its entirety, Rod Babers knows plenty about how the league evaluates talent and chooses which players to draft. In this edition of Media Voices, the host of AM 1300 The Zone’s Sports Buffet gives his take on how this year’s group of Longhorns might fare in the draft.

Jackson Jeffcoat is the highlight of this class. He ran a fast enough 40 time (4.63) that he solidified himself as a player who could play outside linebacker. He doesn’t have enough bulk to play 4-3 defensive end in the league, but people look at him as a 3-4 outside linebacker. The same thing happened with Sam Acho and he ended up as an outside linebacker with the Cardinals. Honestly, former defensive coordinator Greg Robinson made Jeffcoat a lot of money. Before Robinson, many saw Jeffcoat as underachieving. Then Robinson arrived and put Jeffcoat in that “joker” position where he moved around — that showed his versatility. He’s a natural pass rusher. The stats show that Jeffcoat and Cedric Reed came together as the most dynamic and productive defensive end combo in the country. His pedigree helps, as his dad had a great NFL career and now coaches at Colorado. NFL coaches like that fact because he’s already had coaching and that’s less work for them.

At the combine, Mike Davis did fine. He ran