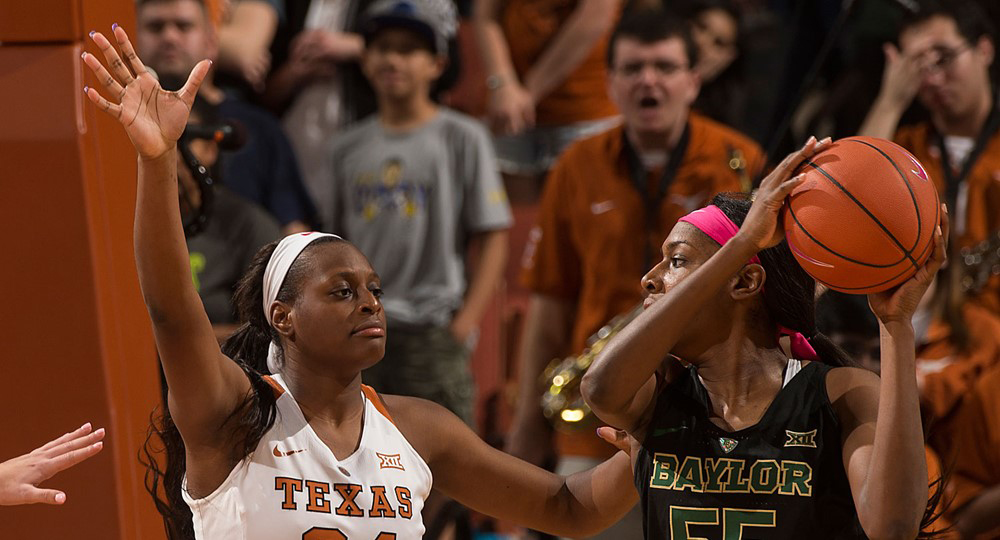 Joyner Holmes and the Longhorns will face No. 1 Baylor Monday in Waco after she scored a game-high 20 points to lead the No. 19 Texas women's basketball team to an 81-57 win over Texas Tech to complete the season sweep of the Lady Raiders (photo courtesy of texassports.com).

The victory improved the No. 19 Longhorns’ record to 21-6 overall and 11-4 in games against Big 12 opponents, while Texas Tech slipped to 12-14 overall, and 3-12 against conference opponents. The win also extended to six the number of consecutive seasons in which the Longhorns have swept the season series with Texas Tech.

Texas outshot Tech from the floor, connecting on 32 of 52 field goals (51.6 percent), compared to the Lady Raiders’ 33.9 percent shooting (hitting 21 of 63 shots from the floor); in the process, the Longhorns improved to 7-0 in games this season in which they have connected on at least half of their field goals.

Texas also dominated inside, enjoying a 42-20 margin on points in the paint, thanks in large part to a 48-25 rebounding edge.

Holmes did more than score at a point-per-minute clip in her 20 minutes of action; she also converted both of her shots from beyond the three-point line, pulled down six rebounds and tied her career high by handing out four assists.

The junior from Cedar Hill was one of three Longhorns to score in double figures: senior guard Danni Williams chipped in 16 points, and freshman forward Charli Collier added 14 while snagging a team-leading seven rebounds.

The Longhorns now head north to Waco to take on No. 1 Baylor at 6 Monday in a game that will be broadcast nationally on FS1.