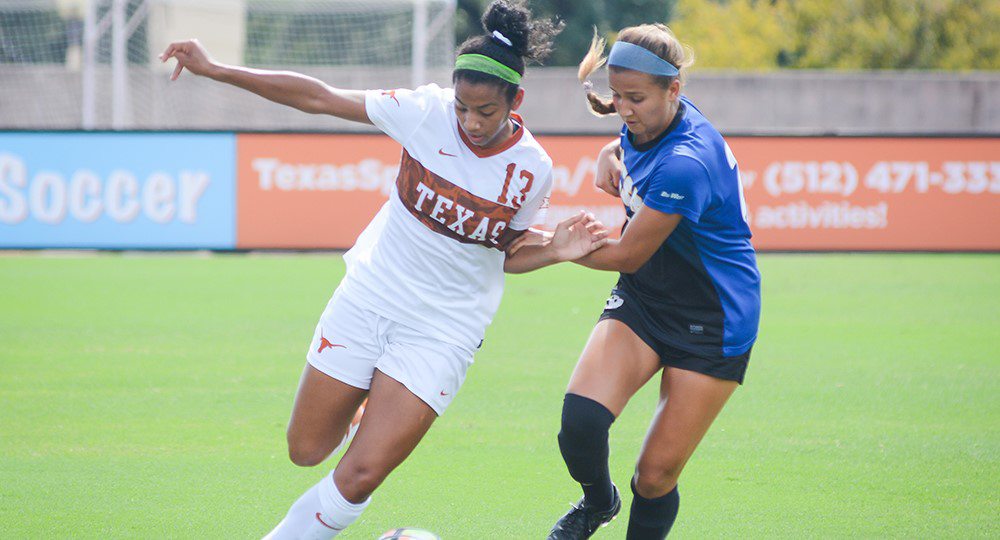 Sophomore forward Cyera Hintzen scored in overtime — her third game-winning goal among her four tallies in the early part of the season — to lift the Texas soccer team to a 1-0 win over UT Rio Grande Valley (photo courtesy of texassports.com).

AUSTIN, Texas — The No. 21 soccer team continued its perfect start, improving its season record to 8-0-0 by edging UT-Rio Grande Valley, 1-0 in overtime at Mike A. Myers Stadium.

Sophomore forward Cyera Hintzen scored the game-winning goal in the 98th minute for the Longhorns. With the loss, UTRGV’s record dipped to 3-3-2.

Texas head coach Angela Kelly dismissed the idea that her team started the game slowly. Instead, she said, despite the Longhorns’ 28-5 edge in shots, it was the UTRGV defense that refused to break, steering the game into extra time.

“I don't think that we started off too slow,” Kelly said. “I would have to go back and check to see how many shots we had in the first 15 minutes, but that's a really tough style to have to play against. When a team is sitting back, it gets frustrating. We were creating chances though. The shots were 28-5. There were 10 shots in the first half and then 16 in the second half. You have to be methodical. You have to be disciplined. You can't allow yourself to get frustrated. The longer a team stays in it, that's when things can happen. Let's cut to the chase, a win's a win. Let's credit our opponent. They were extremely organized and very well coached. They understood their system and their style. That was a tough team to beat today.

Hintzen’s game-winning made it two games in a row in which the Longhorns needed to go into extra time before finishing off their opponent; Cydney Billups scored in the 99th minute Sunday to lift UT to a 3-2 win over Northeastern. Hintzen now has a team-leading four goals this season, three of which have been game-winners.

“I think we just wanted to come out early and get a goal and finish the game” Hintzen said of the Longhorns’ approach in overtime. “We were trying to get forward and get a ball in the box to get an easy goal. We started to combine, and once we saw an open shot, we just took it.”

Friday’s victory means the Longhorns begin play against Big 12 opponents with a perfect record; their first conference game comes next Friday when Iowa State comes to Austin for a 7 p.m. game that will be broadcast on the Longhorn Network.

After Friday’s victory over UTRGV, Kelly said she didn’t worry that her team would get caught looking ahead to the Iowa State game and therefore stumble in what could be perceived as a “trap” game.

“No, I don't think (it was a trap game),” Kelly said. “It's just a credit to the organization of our opponent, and that's a fantastic test. Now if we face a bunker again we're going to have a great piece of video to teach from. That's not something that every single young lady grows up learning how to organize to beat. We talked a little bit about the tactics at halftime. I thought coming out in the second half we played it on a little bit better and had more patience. We just needed one. In the run of play, it was just going to take one. We're just really pleased that it came in overtime.”