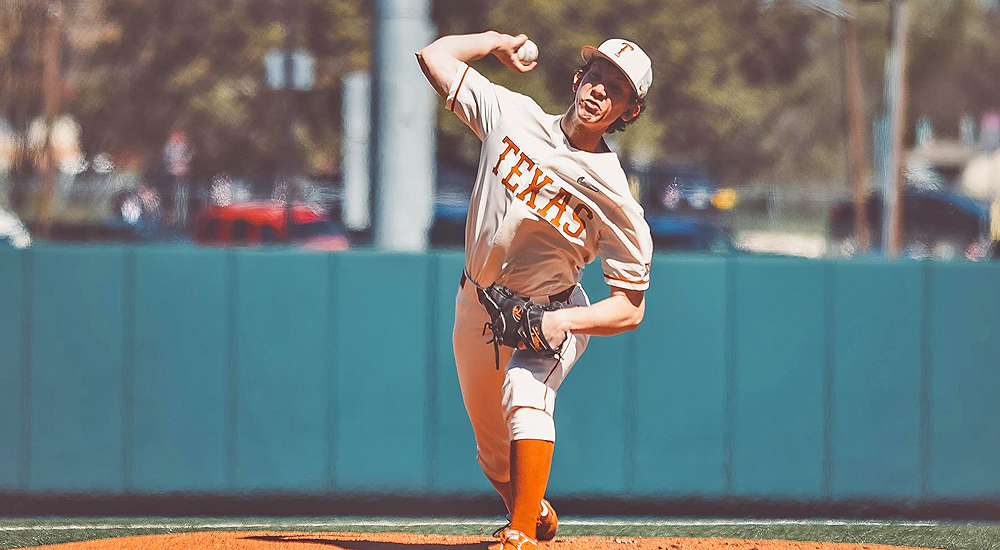 Pitcher Matt Whelan allowed just two hits and struck out three en route to earning his first victory of the season in the Texas baseball team's 3-0 win over Purdue (photo courtesy of texassports.com).

The victory sealed a 3-1 series victory over the visiting Boilermakers. The Longhorns improved their season record to 6-2, while Purdue slid to 1-6.

The Longhorns got all the runs they would need Sunday in the first inning. Center fielder Duke Ellis and left fielder Eric Kennedy each bunted his way on base, with Ellis scoring what proved to be the game-winning run on an RBI single to left by right fielder Austin Todd. First baseman DJ Petrinsky then smacked a two-run double into the gap in right-center field, plating the Longhorns’ second and third runs of the afternoon.

After that, Whelan (1-0) and a pair of relievers effectively mesmerized the Purdue hitters. Kamron Fields replaced Whelan in the sixth inning with one runner on base and no outs, only to induce a double play and a two-out groundout to escape the inning with the shutout intact.

Fields surrendered one walk in three hitless innings, before giving way to redshirt freshman Cole Quintanilla, who allowed a meaningless single en route to earning the first save of his career.

Despite getting shut out Saturday, 4-0, in the third game of the series, the Texas offense has been playing well, piling up 23 runs in the four-game set with the Boilermakers, and 49 runs in the first eight games of the season.

The Longhorns will host two games during the week, welcoming Sam Houston State to Disch-Falk Field at 6:30 p.m. Tuesday and then facing Texas-San Antonio at 7 p.m. Wednesday. Both games will be broadcast on the Longhorn Network.