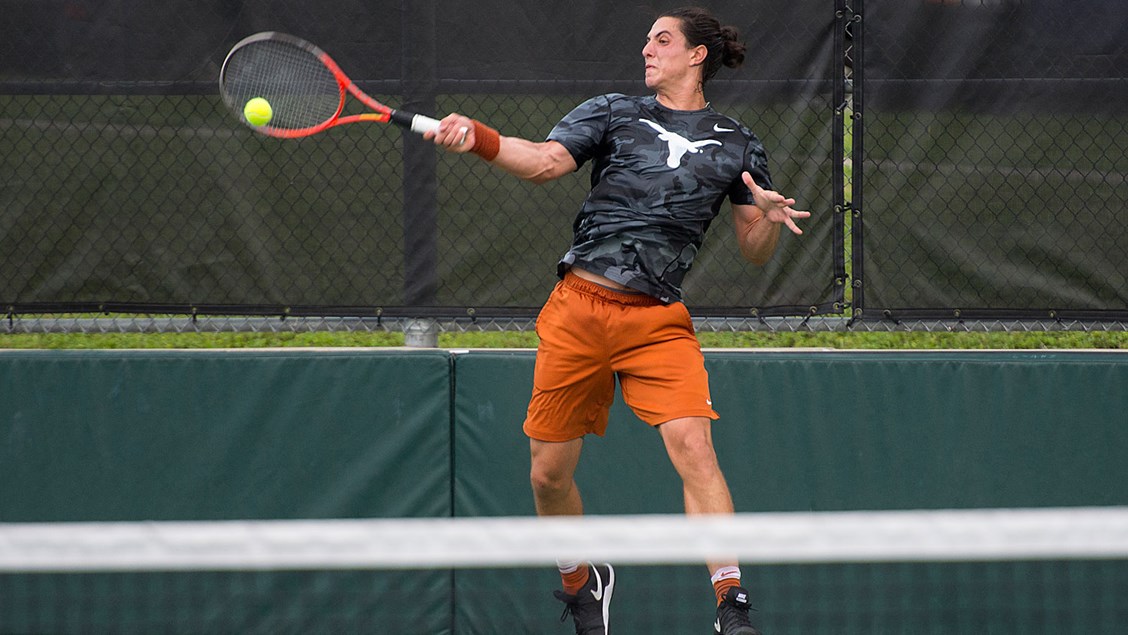 Leonardo Telles and the Texas men's tennis team avenged their only loss of the season with a 4-1 victory Thursday over No. 1 Ohio State at teh Texas Tennis Center (photo courtesy of texassports.com).

Austin, Texas – The No. 4 Texas men’s tennis team welcomed top-ranked Ohio State to the Texas Tennis Center Thursday and sent the Buckeyes home with a 4-1 loss.

The victory improved the Longhorns’ record to 16-1 and avenged their only loss of the season, when they fell Feb. 17 to OSU in the semifinals of the ITA National Indoor Championships in Chicago.

UT claimed the doubles point, marking the first time this season that Ohio State has failed to win it. The teams split the first two matches, with Yuya Ito and Chih Chi Huang topped Ohio State’s Kyle Seelig and John McNally, 6-3, and Harrison Scott and Christian Sigsgaard falling, 7-5, to Martin Joyce and Hunter Tubert. In the deciding match, Colin Markes and Leonardo Telles rallied to win five of the last six points to finish it and earn the doubles point for the Longhorns.

“The doubles point was huge,” interim head coach Bruce Berque said. “I think Colin Markes and Leo Telles really stepped up under pressure, and Chih Chi Huang and Yuya Ito did a great job in their match, too. Yuya was an absolute stud tonight in doubles and singles getting the first win in doubles and first point in singles, so that was huge. What I really liked about the match is everyone fought on every court, and we had fantastic crowd support, and the guys did a great job of supporting each other.”

No. 9 Ito was equally impressive in singles, winning the first seven games en route to knocking off No. 28 Seelig, 6-0, 6-3. Ito leads the Longhorns with 15 dual match singles victories, against just one loss, and has beaten five ranked opponents. Including tournament play, Ito is no 26-4 this season.

Senior Rodrigo Banzer into the sixth singles spot and it paid off with a 7-6 (5), 6-2 win over Hunter Tubert. That gave the Longhorns a 3-1 lead as it ended almost simultaneously with Colin Markes’ match against James Trotter, which Trotter won, 6-2, 7-5, giving Markes his first loss of dual match play at 10-1. Banzer trailed 3-1 and 4-2 in the first set, but recovered to tie at 4-4. The players exchanged wins until reaching 6-6 to go to a tiebreaker. Neither player led by more than a point until Banzer broke a 5-5 tie with two straight for the win. In the second set, Banzer was the one to jump out to a lead, first at 3-0 and then 4-1, before finishing the match at 6-2. After spending some time out of the lineup, Banzer has now played singles in the last three matches and is 6-2 in dual matches.

Telles dropped the first set to Joyce in the third single’s match, before rebounding to claim the second set, 6-3. In the third set, he trailed by a game before winning off four straight to win, 6-3.

The victory was the fifth in a row for Telles, who now is 9-1 in dual match singles play, including three straight wins over ranked opponents.

The Longhorns will return to the court at 6 p.m., Friday, March 22 when they host No. 9 Columbia at the Texas Tennis Center.