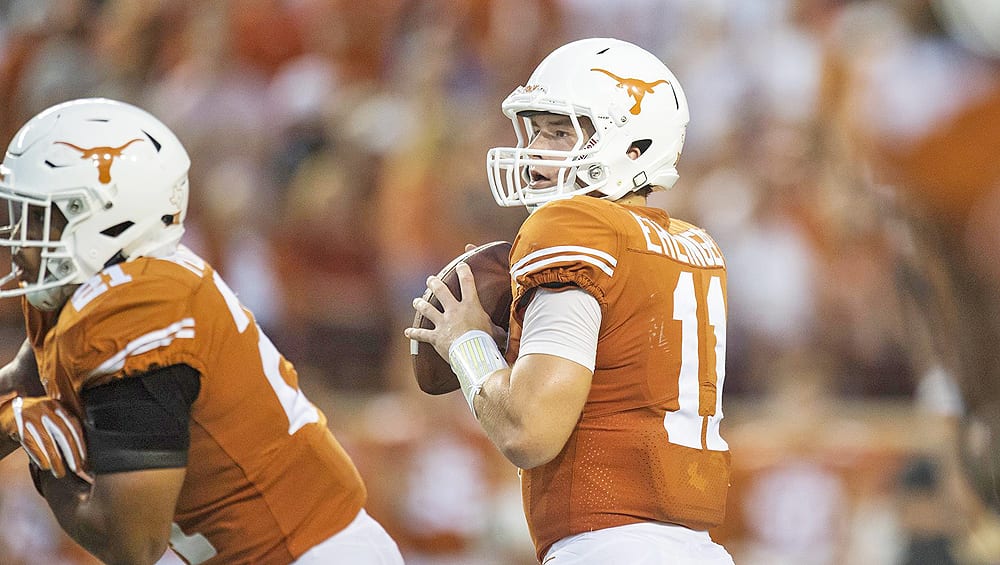 Quarterback Sam Ehlinger completed 22 of 42 passes for 283 passing yards and a pair of touchdowns in the Longhorns' 38-35 loss to Oklahoma State (photo courtesy of texassports.com).

STILLWATER, Okla. — Texas coach Tom Herman has said often this season that his team has to play its best game each week to continue to win. Achieving that goal can not include a dismal first half, which is what ultimately made the difference for the sixth-ranked Longhorns in a 38-35 loss to Oklahoma State Saturday at Boone Pickens Stadium.

Texas allowed the Cowboys four touchdowns and a field goal and 328 yards offense in the first two quarters, digging a huge hole from which it would not emerge. Not even a gutsy second-half performance from quarterback Sam Ehlinger and a late charge could save the Longhorns this time.

“We could have checked it in, but we didn’t,” Texas coach Tom Herman said afterward. “This is a really big learning moment for our guys, I hope, that we are not a point in our program where we can not not play our best, especially on the road, especially against a good football team, and expect to win. It’s not going to happen.”

Cowboys quarterback Taylor Cornelius passed for 321 yards and three touchdowns and ran for two more scores and was the difference against Texas. Oklahoma State receiver Tylan Wallace hauled in 10 passes for 222 yards and two touchdowns, all career highs, as Cornelius’ main target.

Oklahoma State (5-3 overall, 2-3 in Big 12 play) built a 31-14 first-half lead but had its margin whittled to three points midway through the fourth quarter when Cornelius rambled 10 yards and rolled over the pylon in the front corner of end zone for an insurance touchdown with 5:44 to play.

Texas (6-2 overall, 4-1 in Big 12 play) cut the lead to 38-35 with 1:46 to play on Tre Watson’s 1-yard touchdown run. After a failed onside kick by the Longhorns, Cornelius converted a final third down with a read-option keeper that allowed the Cowboys to run out the clock.

Ehlinger passed for 283 yards and two touchdowns and ran for scores in the loss, which snapped a six-game winning streak for Texas. The Cowboys have defeated Texas four straight times and seven out of the past nine meetings.

“That’s a really upset and dejected locker room, but they are very, very together,” Herman said. “I love the fact that one loss hurts that bad — we had guys in tears — and to think how far we’ve come where one loss matters that much, and it should, means we are heading in the right direction.”

Oklahoma State, exploiting the temporary one-quarter benching of Texas cornerbacks Kris Boyd and Davante Davis due to tardiness to multiple team meetings, drove 53 yards of four plays to Cornelius’ 40-yard touchdown pass to Wallace just 1:48 into the game for a 7-0 lead.

Texas responded with a 65-yard, seven-play march, aided by two Oklahoma State penalties and highlighted by a 15-yard pass from Ehlinger to Collin Johnson in third down and 10, and punctuated by Ehlinger’s shimmy-shake 5-yard touchdown run off right tackle to tie the game at 7 at the 9:58 mark of the first quarter.

The Cowboys jumped back in front on the ensuing possession, moving 75 yards on nine snaps, the final of which was a 16-yard scoring pass to a wide-open Jelani Woods on fourth down and one. A 27-yard run by Hill set the table for the touchdown, which came with 6:43 to play in the opening quarter.

Matt Ammendola added a 24-yard field goal on OSU’s next drive to expand the Cowboys lead to 17-7.

Cornelius pushed the pile for a 1-yard touchdown run on a quarterback sneak five minutes into the second quarter to increase the Cowboys’ advantage to 24-7. At that point in the contest, Oklahoma State had 309 yards of offense to just 67 for Texas – and the game was a total mismatch.

“They had a great game plan. We did not,” Herman said. “As coaches we have to figure out why that happened and make sure it doesn’t happen again. The first half, defensively … I never thought we’d see that.”

Two dead-on throws from Ehlinger, one for 34 yards to Lil’Jordan Humphrey and another to tight end Andrews Beck for 37 yards, set the table for the quarterback’s 1-yard scoring run that brought Texas back to 24-14.

Any momentum the Longhorns gleaned from that score was all but erased on the Cowboys’ final drive of the half, a 10-play, 70-yard march that needed two fourth-down conversions, one that came on offside penalty by Texas.

The second conversion came from the UT 36 when Cornelius and Wallace connected again for a touchdown, this time over Boyd, who was in position but mistimed his jump and allowed Wallace to corral the scoring pass that garnered Oklahoma State a 31-14 lead.

“There was nothing that we got down on on the sideline,” Texas defensive tackle Chris Nelson said. “They just started out faster than us. There was never panic. It was tough to be without (Davis and Boyd) at the start, (but) our whole mentality is ‘next man up.’ We didn’t expect any falloff.”

Ammendola missed a 38-yard attempt midway through the third quarter to allow Texas some hope, and the Longhorns took advantage by drive 78 yards in six plays, with a beautiful 22-yard touchdown strike from Ehlinger to Keaontay Ingram cutting the deficit to 31-21 with 2:15 to play in the quarter.

Ehlinger finally got in his groove on the Longhorns’ next possession, running for a first down before throwing passes to Devin Duvernay and Humphrey before rolling to his right and jumping to throw to Beck for a 10-yard touchdown to bring Texas to within 31-28 with 11:47 to play.

“Hats off to Oklahoma State – they played an excellent game,” Ehlinger said. “You can’t get in a hole like that early in the game. I don’t think this is a setback. We have to keep moving forward and learn from this and get better. We definitely didn’t play to our standard. We have to come out faster and play more aggressive at the beginning of the game.”

The Longhorns’ nearly two-month winning streak is history, as is their stay in the top 10 and any chance to play for national championship. But Texas still controls its destiny in the Big 12 title race as one of three teams with one conference loss.

Next up for Texas is a dustup with another ranked opponent, West Virginia, at 2:30 p.m. Saturday at DKR-Texas Memorial Stadium. The game will be broadcast on Fox.