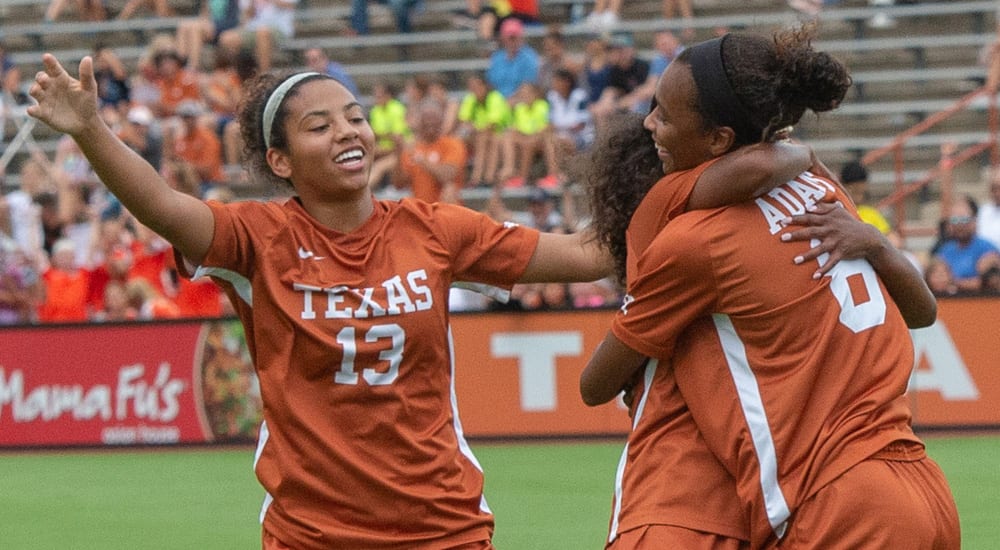 Forward Cyera Hintzen (13) and the Texas soccer team battled Kansas to a scoreless draw in the first round of the Big 12 Championship, but advanced in a penalty kick shootout to set up a semifinal matchup Friday with West Virginia (photo courtesy of texassports.com).

KANSAS CITY, Mo. — All the way up to No. 10 in the latest rankings, the Texas Soccer team continues to rise through the postseason with an amazing shootout win.

Texas forward Cyera Hintzen converted a penalty kick and goalie Nicole Curry was sensational to advance the Longhorns past Kansas in the Big 12 Championship quarterfinal in Kansas City. 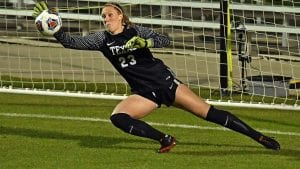 The Longhorns, the third seed in the tournament, will return to the Swope Soccer Village for the Big 12 Championship semifinals, in which UT will face second-seeded West Virginia, which shut out Oklahoma, 3-0. The Longhorns and Mountaineers will face at 7 p.m. Friday, Nov. 2. Meanwhile, top-seeded Baylor will face Texas Tech at 4:30 in the other semifinal.

The game officially goes down as a 0-0 tie, but after the Longhorns and Jayhawks played through two overtime periods, the game was solved in a shootout, which UT won, 3-1. Texas midfielder Kayra Dollas coverted the first PK, after which KU’s Kaycie Young, UT’s Chelsea Surpris and Kansas forward Katie McClure failed to convert before Hintzen buried the deciding shot.

You just have to love the excitement after winning a big penalty kick shootout! #RAMPED pic.twitter.com/x6Sb4CD8Zn

The shutout was the sixth of the season for Texas goalkeeper Nicole Curry, who collected five saves.

Kansas dominated the first overtime to the tune of a 4-0 shot advantage. During the final minute of the first extra session, UT freshman defender Emma Regan made arguably the play of the match. The Vancouver, British Columbia, native was stationed at the left post on a corner kick and used her right foot to deflect away a potential goal off a 15-yard volley by KU midfielder Ceri Holland.

Even with a winner the game was as even as the score suggests. The Jayhawks outshot the Longhorns, 22-16, but held the smallest of edges in shots on goal, 5-4. Texas, meanwhile, earned eight corner kicks, compared to four for Kansas.

The Longhorns turned the tables in the second OT as Berg had a shot blocked at 105:51 before Hintzen sent a 14-yard effort over the crossbar at 106:01. With just four seconds remaining in the contest, Hintzen tried one more shot, but her 18-yard drive traveled right into Peters’ hands.

Kansas went first in the shootout with its initial PK getting stopped by Curry on a dive to her right. Jett stepped up and banged her try home to give UT a quick lead.

Both teams made their spot kicks during the second round, with Dollas scoring for Texas, while in the third round, the Jayhawks missed their try outside the left post and UT’s effort was saved.

Finally, during the decisive fourth round, Curry again came up with a big stop, while Hintzen banged her PK home to complete the shootout triumph.

Hear what head coach Ange Kelly had to say about the electrifying victory:

Friday’s matchup will be the second in less than a month between Texas and West Virginia. The Mountaineers, then ranked No. 16 in the country, beat the Longhorns, 2-1, Oct. 7 in Morgantown, W.V.