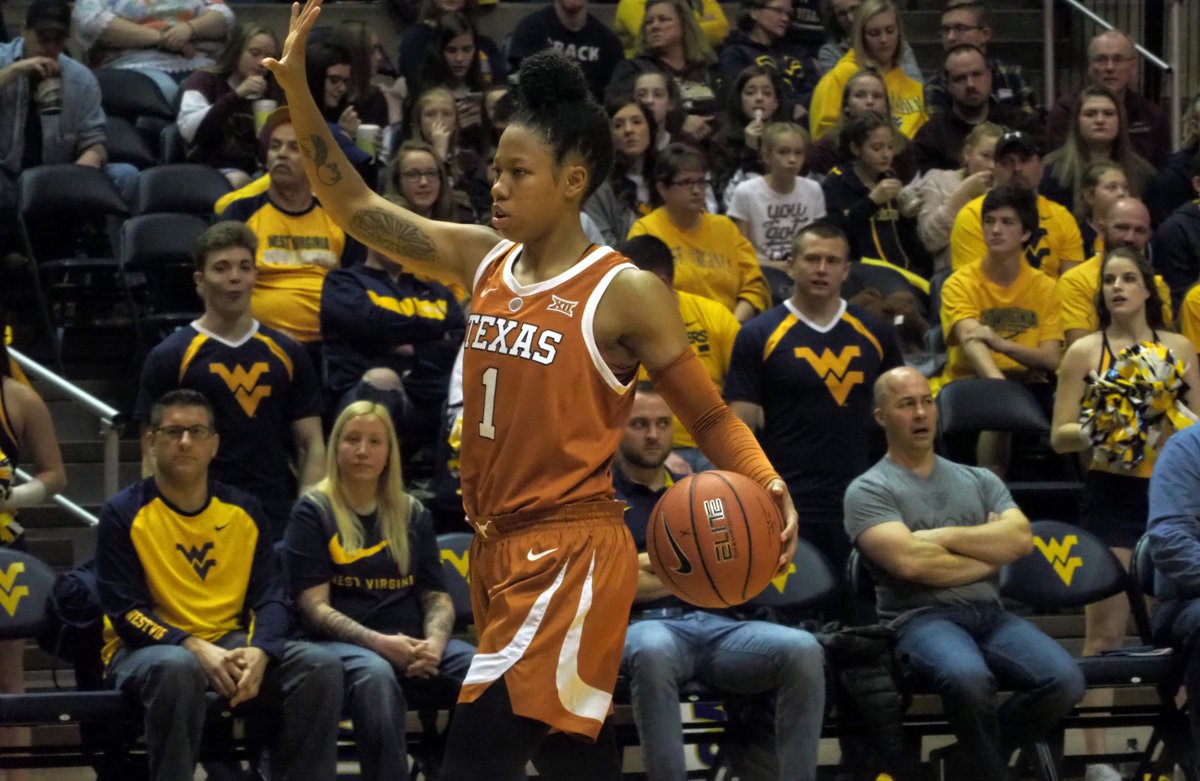 Sug Sutton and the Texas Women's Basketball team improved to 2-0 with a win at West Virginia Sunday (Photo courtesy of Texas Sports).

Sutton poured in 19 points to go with six assists, five rebounds and two steals while shooting 8-for-10 from the field.

“This is a great win, every time we can get a win on the road it’s a great win, it’s very hard to win here,” Sutton said on Twitter following the victory. “We had good defense but our offense was kind of slow, we just talked to each other. We had some leadership on the floor and came in after halftime reversing the ball, doing what we needed to do to get a win here.”

Destiny Littleton connected for 16 points and four boards, while both Danni Williams and Joyner Holmes scored 11 points in the victory.

It was the second game in a row that head coach Karen Aston went with those four — along with Mide Aborowa — as the ‘Horns starting five, and that’s resulted in a 2-0 start to Big 12 Conference play. Aborowa, who helps the defensive intensity for Texas, scored six points and tied Holmes for the team lead with nine rebounds each.

It was on the glass and on defense where the Longhorns really shined, as Texas outrebounded WVU 45-27 and held the Mountaineers (9-4, 0-2) to just 19-for-49 shooting in the game. Although Naomi Davenport had a game-high 26 points for the Mountaineers, the Horns held the rest of the team totally in check.

“We’ve been searching for some toughness and throughout this game we sort of found some of it I think,” Aston said. “I think they started out really trying to punch us a little bit and we didn’t respond to it very well, But the more the game wore on I thought we kind of took a collective breath that we were gonna be OK. I thought we continued to play defense and I think we really showed some toughness.”

Aston also shortened up the rotation and only went with eight players in the win, as Texas cleaned up its play as well by bringing the turnovers down from its last win over Oklahoma State last week. Audrey Warren had seven points off the bench for Texas.

Texas plays next on Wednesday hosting Oklahoma at the Erwin Center at 7 p.m.