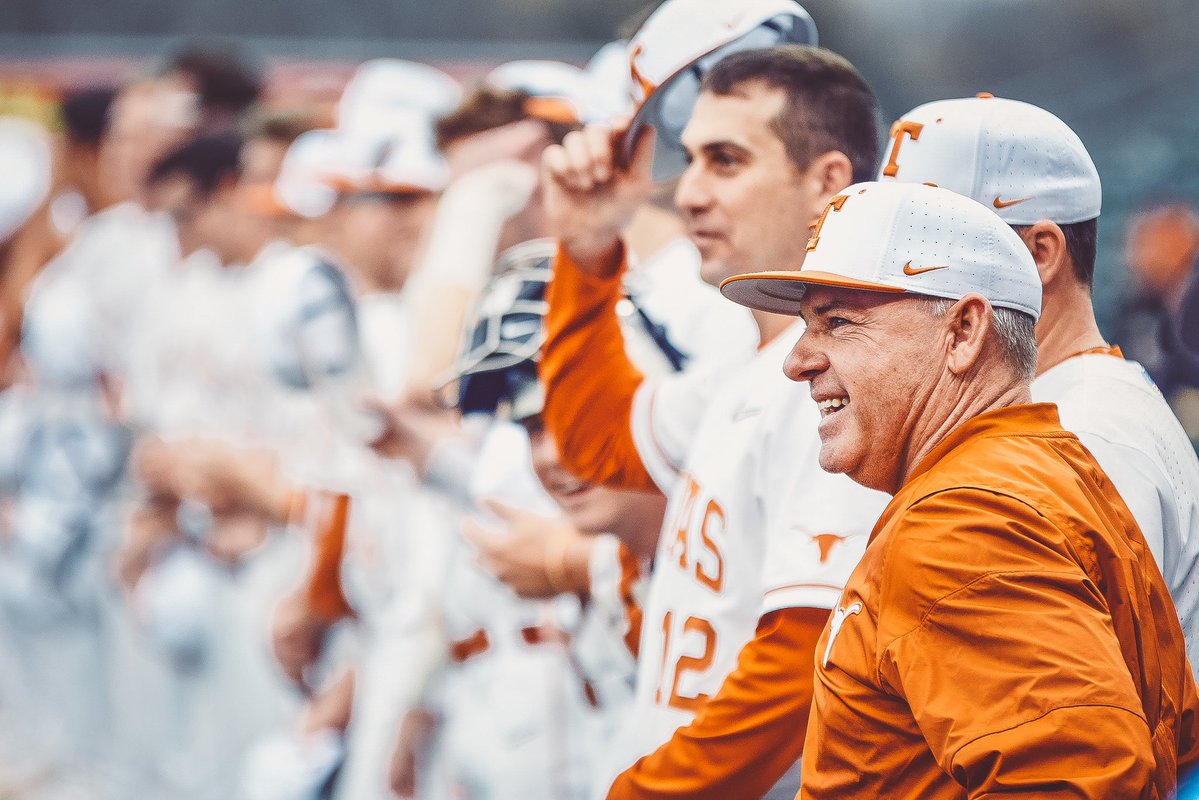 The Texas baseball team starts the 2019 season today with a three-game series at Louisiana (Photo courtesy of Texas Sports).

AUSTIN — Embracing the expected and expecting the unexpected.

That’s what Texas baseball head coach David Pierce foresees for his squad heading into his third season at the helm of the ballclub.

With 17 returning players from last year’s trip to Omaha for the College World Series, the Longhorns have a stable core as they set to start the 2019 season. Yet there is a big influx of freshman and newcomers to the team that expect to make an impact, and Pierce will need them to do just that for the Longhorns to return to Omaha again.

“To me it’s back like UT used to be, where you better embrace the expectations because if you don’t you’re gonna get slapped, you're gonna get popped,” Pierce said. “It’s just a little bit of unknown, but the expectations are great and that’s how we expect them to be for us.”

Slated to start in the middle of the lineup and play some DH and first base, Zach Zubia is one of the key cogs returning to Texas this year with expectations of a big season. And of letting the youngsters understand what it will be like as the Horns have a target on their back this year.

“We have to come out every day knowing the target is on our back. We have to prove what we want to do and that’s making it to Omaha,” Zubia said. “That carries a big load and we’ve all kind of accepted that big load this year — the young guys, the older guys.”

Along with Austin Todd, Tate Shaw, Masen Hibbeler and Duke Ellis among the veterans, there is a quiet leadership instilled in this year’s group, which largely likes to lead by example.

“It’s mostly quiet guys but at the same time we like to have fun, we like to mess around with each other,” Ellis said.

Coming off a 42-23 season with a 17-7 mark in Big 12 play, the winners of the Big 12 Championship are aiming to capitalize off of the momentum built last season. Though the team started 9-9 a year ago, the level-headedness that permeated the team was crucial to grinding toward the eventual CWS berth. Pierce sees that same mentality present in his team this year.

“They know what it takes and they lead in their different ways,” he said. “Literally I feel like we have a clubhouse full of leaders and it’s pretty easy for me to lean on them.”

Ushering in new personalities while staying humble has been crucial for the incoming class, Zubia said. Ellis and Zubia were named to the Preseason All-Big 12 team

“We have 17 guys who have experienced what it’s like to win and we’ve kind of tried to embody that and push that into our younger guys,” said the redshirt sophomore Zubia, “and I think we had a really good time growing them and I think they’re ready for the season.”

Freshman Bryce Reagan will start at shortstop after junior David Hamilton was lost for the season due to injury. Hibbeler will likely slot in at second base but as a versatile fielder he’ll play a few different spots during the season.

In the outfield, it looks like the three spots are set to start the season with freshman Eric Kennedy getting the nod along with veterans Ellis and Todd.

“Todd can fly, I’m pretty fast, Eric can fly — I think we can cover ground pretty well together,” Ellis said.

Omaha On the Horizon

Looking back at the timid start from a season ago, the Longhorns admit they’d love to get off to a better start this season, but they’re trying to truly focus in on not looking too far ahead as June remains a long ways away.

Sophomore righty Bryce Elder earned the nod to start Game 1 of the season and of the three-game series against Louisiana starting today, and he’s embraced what being the Friday-night starter entails in the early going.

“It’s big. I know that last year we lost on Sunday against them and it kinda — I don’t wanna say took some confidence away from us — but a win right off the bat would be big for our confidence,” Elder said.

Junior Blair Henley, who as Pierce noted is “the only pitcher that's thrown 50-plus innings from last year,” is scheduled to start Game 2 of the series on Saturday, with freshman Coy Cobb in line to start Game 3. At the season’s onset Pierce isn’t going to press anyone into extended action as he wants to see what everyone in the bullpen has to offer.

“We wanna get into some guys that we also have been building as potential starters,” Pierce said. “So you could see some piggy backs where a starter goes four, five (innings) and another potential starer picks up from there, then go to the back end.”

Elder worked mainly as a reliever a year ago, starting one game, but moved into a starter’s role last summer and on through the fall as well.

In the back end, a cast including Mason Bryant, Kam Fields, Cole Quintanilla, and even Donny Diaz, who is working his way back from an extended injury layoff, could slot in to pitch those crucial late innings.

There are 13 true freshman and one redshirt freshman on Pierce’s pitching staff this season.

Even as they work through the unknowns this weekend, Pierce would love to see some wins pile up through Sunday to show everyone on the inside that their confidence is high for a reason.

“(Winning) sets a mentality, creates and builds confidence,” Pierce said. “I expect us to go out there and really compete in a great environment, in a hostile environment and it’s gonna be a great test for us early on.”

A day before the first game of the season it was all Zubia and the Longhorns could think of.

“I was sitting in class (Thursday) just thinking, ‘Man I cannot wait to get on this plane, put my head down on a pillow and wake up it’s the first game of the season,’” he said. “It’s something that we anticipate all year. We’ve grinded throughout the whole year — morning workouts, fall ball, long practices during the spring and now it’s kind of like it’s finally here and let’s get this thing rolling.”