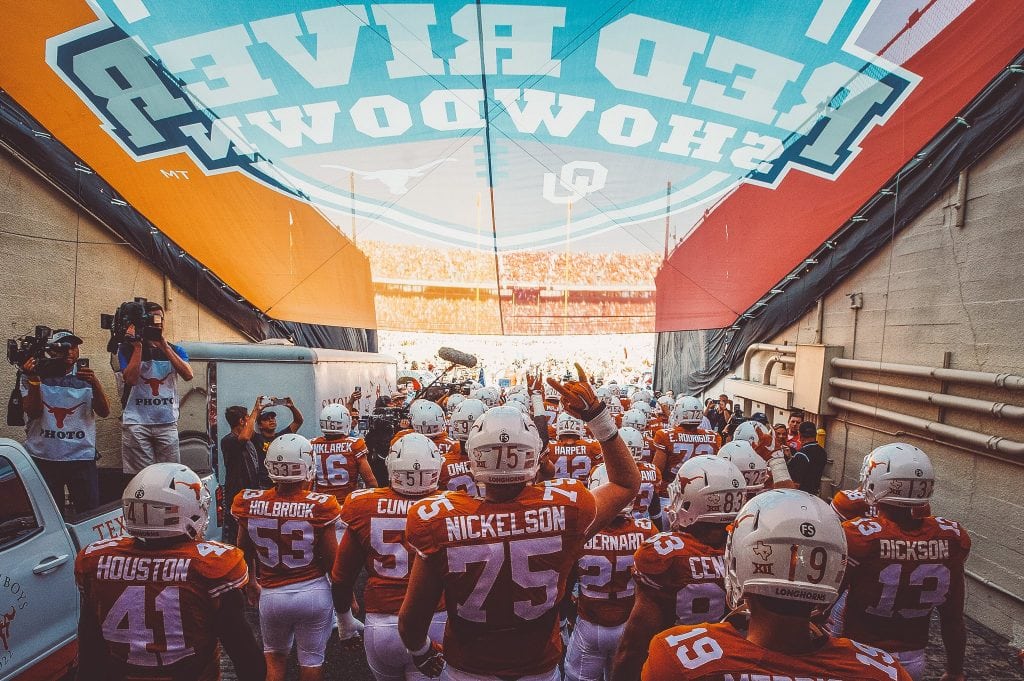 *This story has been updated to include Vince Young appearing on the FOX pregame show Saturday in Dallas.

AUSTIN, Texas — First-timers and fourth-timers alike all have the same look of awe on their face once immersed in the experience of a Texas-OU Saturday.

The Red River Shootout, er Showdown, or Rivalry, regardless of its name, for the herds of Horns fans flocking north to see the Texas Football team stifle the Sooners in the best rivalry in college sports, wide smiles instantly appear at the array of awesome experiences on the State Fair of Texas grounds at the Cotton Bowl.

With Texas at No. 19 and Oklahoma ranked No. 7, the showdown has Big 12 Championship as well as down-the-line bowl game possibilities looming large for each squad. And the national media will be on hand in droves to see how this showdown shakes out.

Horns fans should get to the game extra-early to fully feel the electric environment leading up to the game, and especially as the teams run out of the tunnel onto the field.

Junior wideout Collin Johnson said seeing the sea of fans as the Texas bus approaches the stadium, then the environment inside, lights up the players’ eyes.

“There's nothing like that bus ride. Just seeing the OU fans and the Texas fans walking, the stadium is split half and half. It's just an unreal environment,” Johnson said. “It speaks for itself. It’s a big game, an exciting game with passion and stuff. We're looking forward to playing in it.” 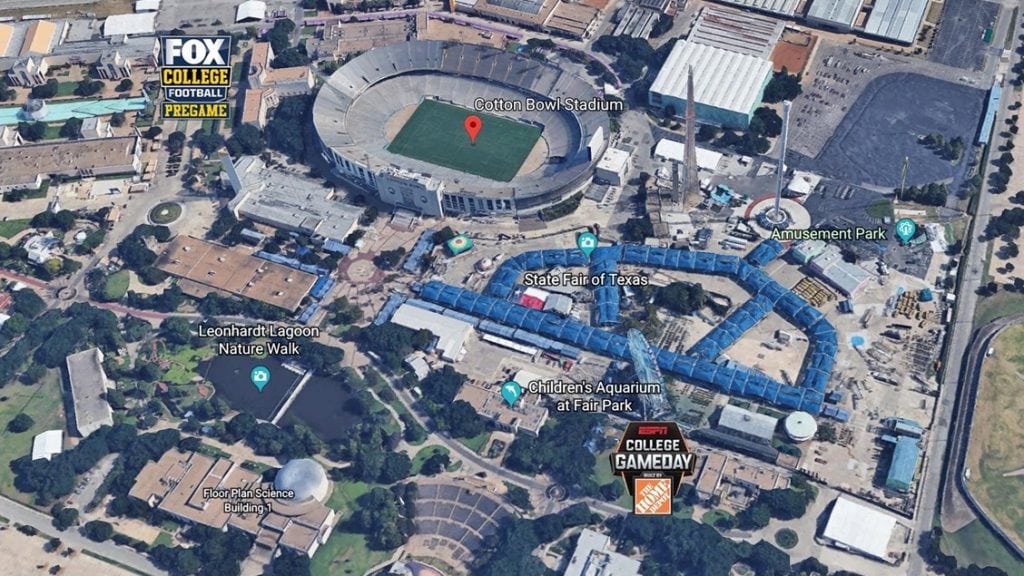 Array of Excitement Set for Saturday

Both ESPN College GameDay and FOX College Football Pregame will broadcast live outside the stadium leading up to the game.

With their creative UT signs in tow, Texas fans are encouraged to get out early to ensure orange outnumbers the other color for the show — and more importantly inside the stadium before kickoff at the Cotton Bowl, where the UT players have said the energy coming out of the tunnel is unlike any other because of the fans.

“The biggest thing is just how huge the rivalry is. In high school, you hear about it and you know how important the game is but it's a totally different feeling when you run out of that tunnel,” junior Brandon Jones said.

The Longhorns enter the matchup winners of four straight, with an overall record of 4-1 and a 2-0 mark in the Big 12 Conference. The Sooners are 5-0, 2-0 heading into the highly-anticipated game.

Saturday's show will mark the first time that College GameDay has been live at a Longhorn game since the AT&T Red River Showdown in 2011. The set will be located on the lawn space between the Children's Aquarium and the WRR building.

The fun begins with ESPN’s always enchanting pregame show set to start at 8 am. Saturday morning, leading up to kickoff inside the stadium at 11 a.m.

Furthermore, this year fans can also get in on the FOX pregame experience beginning at 9 a.m. on the grounds as well.

Along with the pregame shows, there's the historic State Fair of Texas itself, which starts at 8 a.m. Saturday (for a full schedule, visit: https://bigtex.com/schedule/2018-10-06/). 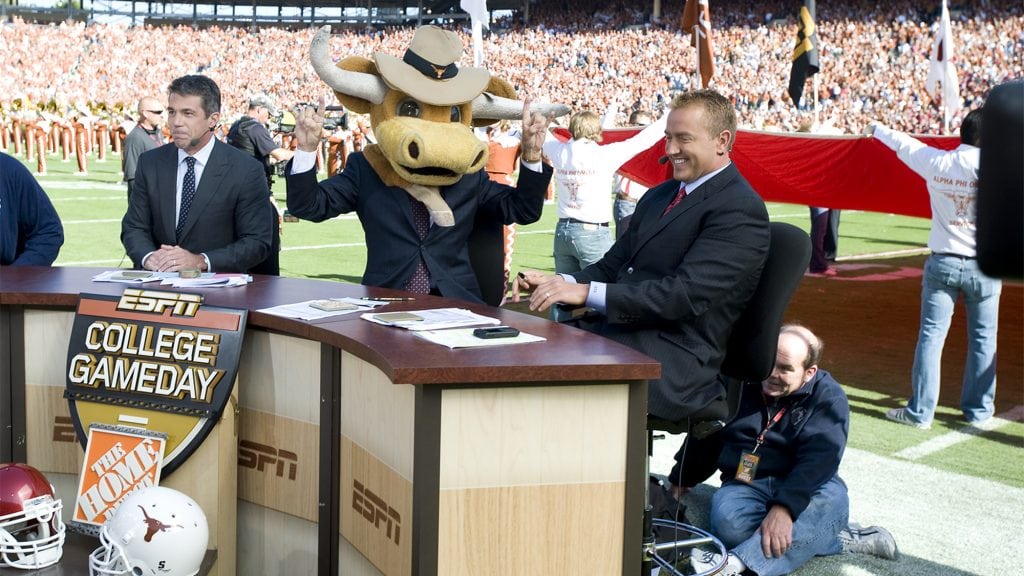 The ESPN GameDay Crew Hits Texas-OU for the first time since 2011 (Photo courtesy of texassports.com)

ESPN's College GameDay will broadcast live from the Classic Coral inside the fairgrounds from 8 -10 a.m. on Saturday morning.

The final hour will move inside the Cotton Bowl to bring viewers a look into the pregame atmosphere from the field. The 10-time Emmy Award-winning show is hosted by Rece Davis, who is joined by Lee Corso, Kirk Herbstreit, Desmond Howard, David Pollack and Maria Taylor as well as other contributors. 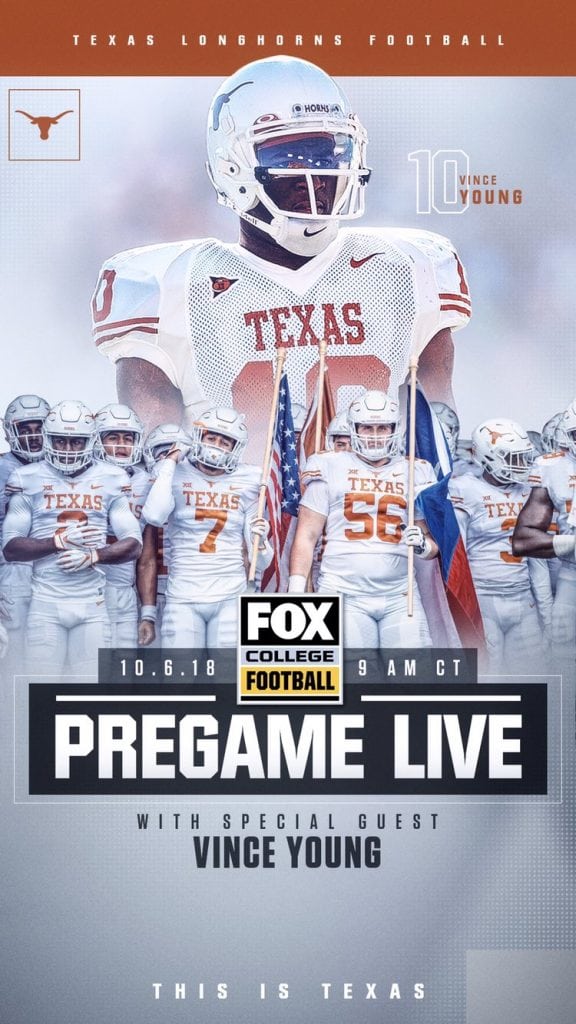 Vince Young will join the FOX pregame show Saturday before the Red River Showdown at the Cotton Bowl in Dallas (Photo courtesy of texassports.com).

Update: Vince Young will be joining the FOX pregame show Saturday from the Cotton Bowl.

In addition to College GameDay, FOX will be live from the north end of the stadium off Grand Ave. in front of the Hall of State for a special edition of FOX College Football Pregame.

Beginning with coverage at 9 a.m. on FS1 and simulcasting on FOX beginning at 10 a.m. and leading up to 11 a.m. kickoff, join host Rob Stone and analysts Matt Leinhart, Robert Smith and Dave Wannstedt. Vince Young will also join the set as a special guest during the show.

Once the game kicks off at 11 a.m., FOX's Gus Johnson, Joel Klatt and Jenny Taft will have the call.