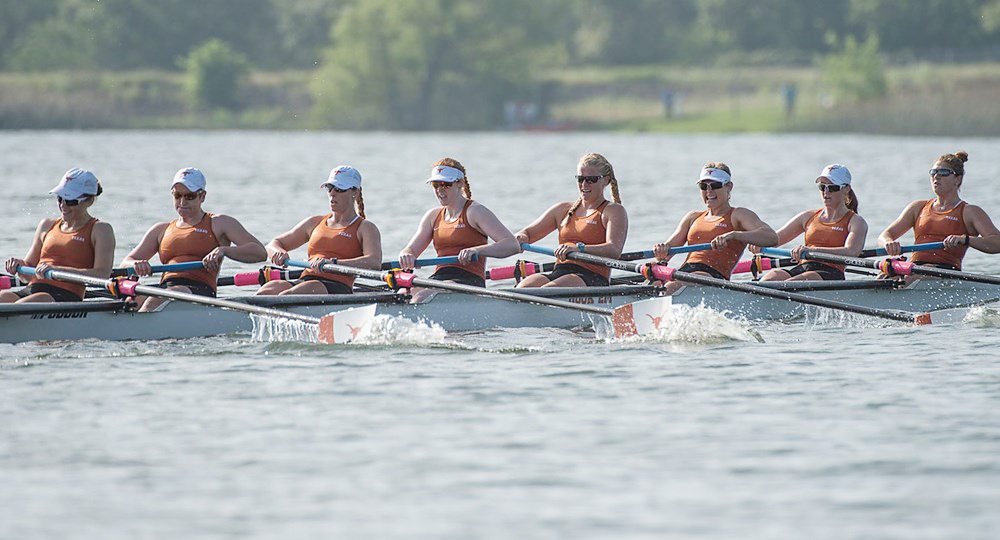 The University of Texas rowing team finished eighth at the NCAA Championships, thanks in part to the first finals victory at an NCAA Championship in the history of the UT program (photo courtesy of texassports.com).

GOLD RIVER, Calif. — The University of Texas rowing team got school-record finishes from two of its three boats and finished among the top 10 for the second time in as many years at the NCAA Championships on Lake Natoma in Gold River, Calif.

The Longhorns finished eighth in the field of 22 teams with a team score of 98 points. California won the team title with 129 points, while three-time defending national champion Ohio State finished second with 126 points.

Texas' I Eight (varsity eight) gave UT its first finals victory at an NCAA Championships regatta in the history of the program. The Longhorns led from start-to-finish in the I Eight petite final (consolation final) and crossed the 2,000m finish line first at 6:24.496 while Washington settled for second at 6:25.145. Wisconsin placed third at 6:26.419.

"I gave them about an hour to be disappointed with that semifinal yesterday," O'Neill said. “I said, ‘Let's get ready and show you're a good crew.’ It shows a lot of character to bounce back from being disappointed and coming out and winning that B (petite) final. That's a good boat. We had three freshman and sophomores in that boat. I give them a lot of credit for stepping up and showing a lot of character."

Texas placed third in the fours petite final (consolation final), an improvement of a couple of spots over the previous school record of fifth place in the petite final, which the Longhorns did at the 2015 NCAA Championships.

"We have some good rowers in there," second-year UT coach Dave O’Neill said. "They were disappointed in their semifinal, but they came out and showed a lot of fight today. They were on the losing side of a close finish, but I'm really proud of them for the race they put together today."

The Longhorns placed fifth in the six-boat final of the II Eight (second varsity eight) in a time of 6:35.285, the top finish ever for a 2V8 at Texas and the second top-five finish ever for any Longhorns boat at an NCAA Championships regatta.

"I think with that second eight doing so well, we're starting to show the depth within our program," O'Neill said. "We have a lot of kids who are stepping up and doing better. They know how to go fast, and they're learning. I'm really proud of them, and it shows we're definitely moving forward."