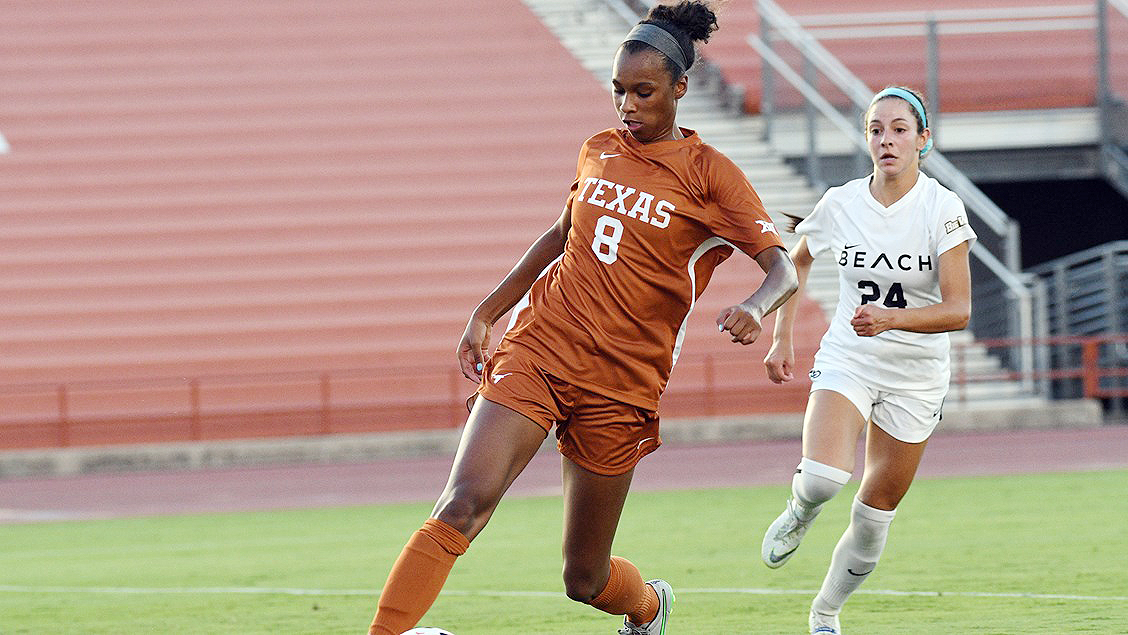 Forward Alexa Adams and the rest of the Texas seniors played their final college game Friday when the Longhorns lost to Virginia Tech, 1-0, in the first round of the NCAA tournament (photo courtesy of texassports.com).

AUSTIN – A cold wind was blowing across the field at Mike A. Myers Stadium Friday night that might have been construed as the air coming out of the balloon of the Texas soccer team’s once-promising season.

The Longhorns, one of the four fourth-seeded teams and top 16 squads in the NCAA Tournament, lost Friday to Virginia Tech, 1-0, closing the door on a campaign in which Texas accomplished plenty but failed to get out of the first round in the postseason for the first time since 2011.

Texas ended its season at 13-5-3. The Longhorns had won 11 straight home matches, including all 10 played in Austin this season, before losing at the most inopportune time. They won’t get a chance to respond, at least not this season.

“Obviously, this is a very disappointing result to say the least,” Texas coach Angela Kelly said. “We had plenty of chances in this game, specifically in the first half, to put one away, to put two away. We needed to get that done and have a greater sense of urgency in the second half.”

The Hokies, veterans of the tough Atlantic Coast Conference gauntlet and playing against the Texas for the first time, got the only goal they needed at the 67th minute from substitute Bridget Patch, a junior who entered the game just two minutes prior to her tally.

The goal, off an assist from Kiersten Hening, beat Texas goalkeeper Nicole Curry low into the left side of the goal. With that score in hand, the Hokies abandoned the counter-attacking style that netted them the lead and pulled into a defensive, outlasting a Texas team that managed just 11 total shots in the match, only two of those on goal.

“We created a handful of chances, and Bridget (Patch) scored a big-time goal for us in the second half which helped us turn the tide of the game,” Virginia Tech coach Chugger Adair said. “Game could have gone either way. Just proud of the group, and we are able to advance. We did a very good job, defended well, dodged a few bullets, (goalkeeper) Mandy (McGlynn) made a few good saves, and we were pretty good going forward.”

After a run to the Sweet 16 last year and a memorable regular season that ended with the Longhorns ranked No. 13, and third in the Big 12, behind Baylor (fifth) and West Virginia (sixth), in the latest release of the NCAA Division I Ratings Percentage Index (RPI) on Monday, Texas is the first Big 12 school finish its campaign. The Big 12 was rated first this week in conference RPI.

“At the beginning of August, our goal was to make it into December,” said Curry, who has six shutouts this season. “Our goal was to fight through the pain, the 4-5 months, and advance. That’s been our goal since we all got to the university. So every loss and setback, it hurts no matter what. It’s a big part of us and to have a big part of us taken away, and not expecting it or wanting it to happen is devastating.”

Texas forward Cyera Hintzen, the Big 12 offensive player of the year, played just 18 minutes because of a lingering leg injury and was severely missed by a team that couldn’t find someone to put the ball in the net.

“Cyera is one of the best players in the country and her walking on the field impacts the game,” Kelly explained. “She and I had discussed a plan, and we knew that her minutes were going to be limited. She played the amount of minutes that she was fit and able to play. But she’s not at 100 percent.”

Both teams had seven shots in the first 45 minutes, with the Hokies putting four shots on goal to just one for the Longhorns. Virginia Tech had three corner kicks to two for Texas in the first half. Texas owned a 57 percent-43 percent edge in possession percentage in the first half.

Texas senior forward Alexa Adams was in tears in the postgame media session, minutes after her collegiate career came to an end.

“It’s definitely hit me, but that’s the game of soccer,” Adams said. “At any given moment any team can get the ball and be ahead. I think our team fought well. I think we had our moments to put it away, but we had a great season and that’s something to be proud of as well.”