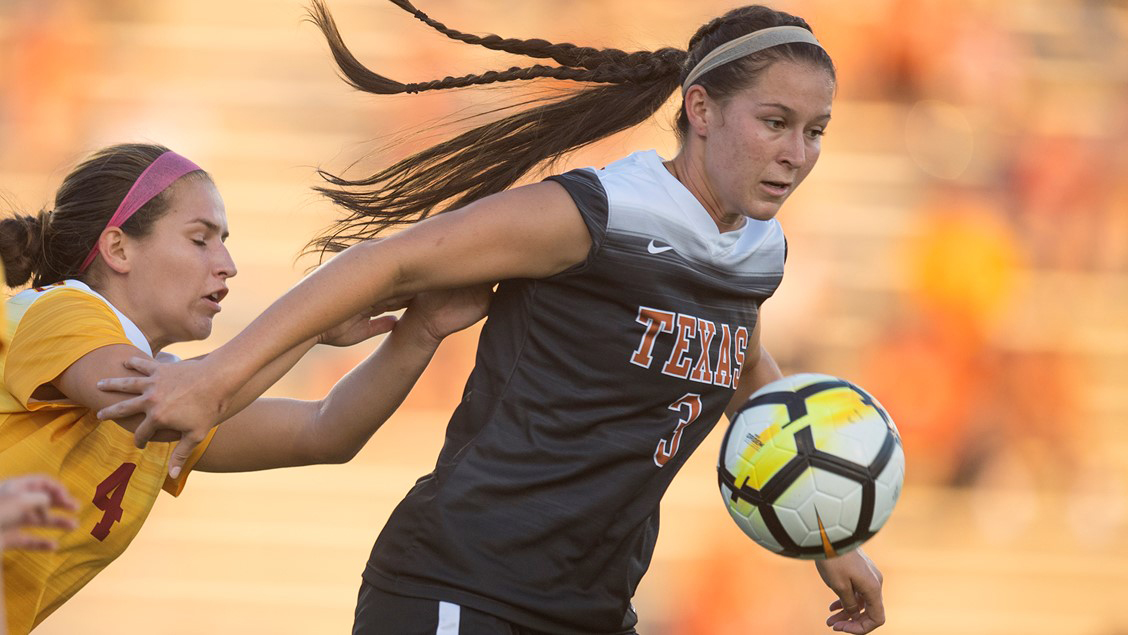 Midfielder Emily Strouphauer and the Texas soccer team now rank among the top 10 in each of the three major college soccer rankings (photo courtesy of texassports.com).

AUSTIN, Texas — One of just nine teams in the nation without a loss this season, the undefeated Texas soccer team has climbed into the top 10 in all three credible polls.

Texas also moved up six slots to No. 10 in this week's release of the NCAA Ratings Percentage Index (RPI), a measure utilized to rank teams based on a combination of wins and losses as well as strength of schedule.

The 9-0-1 Longhorns are No. 8 in the United Soccer Coaches poll, and No. 6 in the Soccer America and Top Drawer Soccer polls. The No. 6 rankings are the program’s highest in any poll since the Longhorns achieved the same ranking in September 2008.

Eight other teams have yet to suffer a loss this season, and two — Boston College and Washington State — also are untied in 2018. The other seven undefeated teams, with at least one tie on their records, are Texas, Florida-Gulf Coast, Georgetown, Colorado, UC-Riverside, USC and Stanford.

The Longhorns have been ranked in the last 17 polls for USC, Soccer America and Top Drawer Soccer, starting in September 2017, when UT entered the top 25 for the first time since 2013.

McFarland scored the tying goal in the 57th minute of Friday in UT’s 2-1 win over Baylor. A model of shooting efficiency, McFarland has scored on the only two shots on goal in her young career.

Her nod from the conference makes it five weeks in a row in which at least one Longhorn has claimed one of the Big 12’s weekly honors. McFarland claimed the same award Sept. 4. Goalkeeper Nicole Curry was named the league’s Defensive Player of the Week Aug. 28, forward Cyera Hintzen was named Big 12 Offensive Player of the Week Aug. 28 and Sept. 18, and midfielder Katie Glenn claimed the same award Sept. 11.