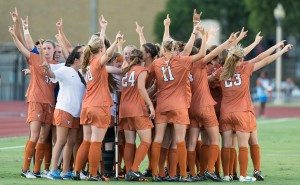 The Texas Women’s Soccer team beat University of Hawaii 2-1 on Aug. 25 in Honolulu, Hawaii at the Outrigger Resorts Shootout. The finished the tournament with a 1-0-1 record for the season.

Senior defender, Whitney Jaynes scored the winning unassisted goal in the 73rd minute, taking the lead 2-1 in the second half.

Krystal Pascua scored the first goal for Hawaii in the 4th minute of the first half. Texas junior midfielder Lindsey Meyer put the ball in the box and sophomore midfielder Julia Dyche scored the goal from 12 yards away, evening the game. This was Dyche’s first goal of the year and second in her college career.

Jaynes’ winning goal was her first goal of the year and second in her career. She scored the goal 18 yards out from outside the 18-yard box in the upper right part of the net.

On Aug. 22 Texas and Arizona State University tied 2-2 in Texas’ first match of the tournament.

Junior goalkeeper Abby Smith scored a 45-yard out goal on a free kick in the first half at the 25th minute.

The Texas Longhorns have their season opener on Fri. Aug. 29 at Mike A. Myers Stadium and Soccer Field against Arkansas. The game will start at 7:30 p.m.

On Sun. Aug. 31 at 2 p.m. Texas will face Nevada at Mike A. Myers Stadium and Soccer Field against Nevada. Both games will be televised by The Longhorn Network.