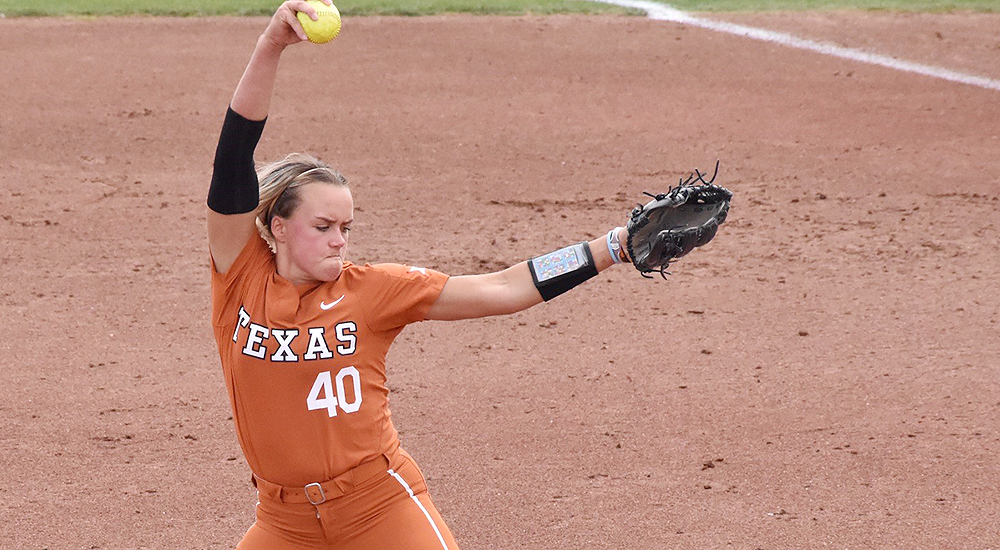 Junior Miranda Elish pitched every innings of both games Sunday as the Texas softball team knocked off Houston twice to advance to face Alabama in the NCAA Super Regional (photo courtesy of texassports,.com).

AUSTIN, Texas — Miranda Elish might not be Superman ... er, Superwoman ... but the Texas junior certainly proved over the past two days and four do-or-die softball games that she could, in fact, be superhuman.

Elish pitched all 14 innings of two games Sunday, 5-2 and 7-0 wins over Houston in the championship game of the NCAA Austin Regional at Red & Charline McCombs Field. In the second and deciding game, Elish allowed Houston just four hits while striking out six, including the side in the final inning.

She even drove in two runs in the victory, showing that if there’s something Elish can’t do, the Cougars have yet to discover what it is.

With the win the Longhorns (45-15) head to Tuscaloosa to face Alabama in the Super Regional, marking the first time since 2013 that Texas has been among the final 16 teams in the NCAA Tournament. The Longhorns advanced to the College World Series in that season as well, tying for third.

Asked afterward about her fatigue level from the grueling weekend, Elish declared she was ready to take on Alabama – right now.

“I’m not tired at all,” she said. “I just did what I had to do to keep going and relied in my teammates to do the rest behind me.”

It’s not hard to see how Elish is being driven by her adrenaline and the success of the past two days. After throwing 229 pitches over the 15 innings of two Texas wins Saturday, she uncorked 200 more Sunday. Houston never got a runner to third base in the nightcap.

“I asked her if Miranda could go, and she said she could,” Texas coach Mike White said. “Miranda was stellar. She didn’t try to overthrow — just kept the ball in the ballpark. As long as she said she was good, I was going to let her continue. I watched her and was looking for signs that she was faltering, but that never happened. She just ran with it.”

“Hopefully we have learned some things about ourselves. We are excited, because things looked pretty bleak on Friday (when Texas lost its opening game to Sam Houston State), and we just wanted to see how far we could go. We used that as motivation.”

Kaitlyn Washington’s solo home run to dead center field in the fifth inning staked Elish and the Longhorns to the lead, and the junior righthander worked her way out of jams in four of the first five innings.

“This is what we’ve been working for, to host a regional and to win it," Washington said. "I’m really excited."

The floodgates opened for Texas in the seventh. Washington added to the Longhorns’ lead with an RBI single to left field that drove home Shannon Rhodes from second base. Elish then helped her own cause when she ripped a two-run double to the wall in left-center field, padding the lead to 4-0, hammering the final nail in the Cougars’ coffin.

The Longhorns boosted their lead with a sacrifice fly by Janae Jefferson and a two-run single from Mary Iakopo, giving Elish (18-9) more than enough of a cushion to finish off the shellshocked Cougars.

Presley Bell took the loss for the Cougars (39-19), surrendering all seven runs on nine hits and two walks.

Texas stayed alive and forced a second championship game with a 5-2 win in Sunday’s first contest. Elish allowed the Cougars nine hits, but just two earned runs in the complete-game performance, striking out five while not walking a batter.

Houston grabbed the lead in the second inning as Maya Thomas doubled and scored on a single by Savannah Heebner.

The Longhorns responded in a big way in the third, scoring all of their runs off Houston starter Heebner (14-9). Lauren Burke’s one-out single plated Ki'Audra Hayter with the tying run. Burke then scored on a passed ball before a bases-loaded single by Rhodes drove in Jefferson and Reagan Hathaway.

The Cougars kept the pressure on Elish and the Longhorns, cutting the lead to three runs on Kelli Montgomery’s single in the fifth. They also put two runners on in the seventh but Elish coaxed Heebner into a ground out to end the game.

UT had eight hits in the opening game, with Rhodes leading the way with two singles and two RBI.

Texas will carry plenty of momentum with it heading into Tuscaloosa, where a rabid fan base will be in full throat to support of the talented, eighth-ranked Crimson Tide. Alabama won the Southeastern Conference regular-season title this season in runaway fashion.

“We kind of bent but we never broke,” White said of his team’s performance this week. “Maybe we had that loss for a reason, because it made us figure out the kind of mettle we had within us to come back from that adversity. I’m very proud of this team ... and we are ready to move on to Alabama.”