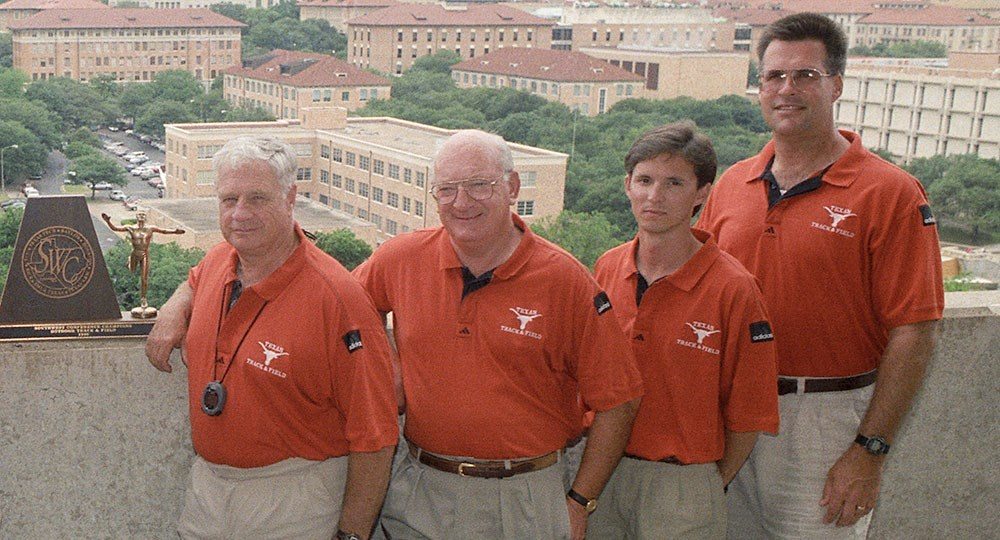 Billy Maxwell (second from left) will be inducted into the USTFCCCA Hall of Fame. (Image via TexasSports.com)

Another former Longhorn will receive his sport’s highest honor when former Texas Track and Field assistant coach Billy Maxwell is enshrined Dec. 15 in the United States Track and Field and Cross Country Coaches Association (USTFCCCA) Hall of Fame for his contributions to collegiate track and field. (Continue readng below...)

(...Continued from above.) Prior to his arrival in Austin in 1991, Maxwell had a successful run as an assistant coach at Tennessee and won a national championship as the head coach at LSU. After he left UT in 1995, he moved north to Nebraska, where he has been an assistant coach for the Cornhuskers for the last 21 years.

The induction ceremony will take place at the USTFCCCA Convention in San Antonio. Other coaches in the 2015 Hall of Fame class include Jim Bibbs, Barbara Crousen, Bob Lewis, Don Strametz and Gary Wilson.

Maxwell brings to eight the number of coaches with ties to the Longhorns’ program. The others are Terry Crawford, DeLoss Dodds, Stan Huntsman, Bev Kearney, Clyde Littlefield, Jack Patterson and Cleburne Price, Jr.