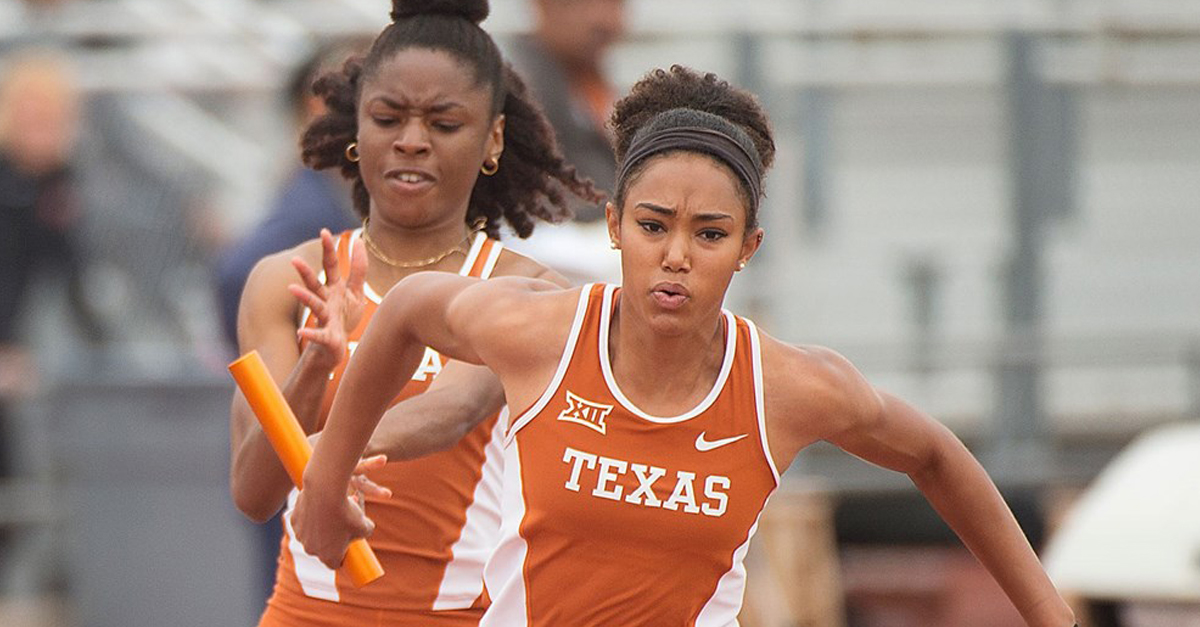 AUSTIN, Texas – This week the Texas Track and Field teams will attempt to do something that has only been done three times in Big 12 Conference history. The Longhorns are attempting to sweep the men's and women's conference titles both indoor and out as they head to Ames, Iowa, for the 2015 Big 12 Outdoor Track and Field Championships.

Action is set to begin on Friday morning and run through Sunday evening at the Cyclone Sports Complex.

Texas dominated the men's competition indoors and the women won by a narrow margin over Kansas State. This week in Iowa, both the men and women expect to see stiff competition from their conference rivals.

Five men's teams rank among the Top 25 this week, including No. 6 Texas. Texas Tech comes in at No. 7 and Baylor is No. 10 to put one-third of the league in the Top 10 in the nation.

Completing the double sweep will not be an easy task with so many ranked teams fighting for the conference championships.

The last time a school claimed the double sweep in track and field was 2006 when Texas accomplished the feat. Texas also pulled it off in 1999, and Nebraska did it in 2000.

Texas is trying to be the only school from a power conference to sweep their conference titles this year. Four schools from mid-majors have already done so with two more holding an opportunity heading into the weekend.

A number of Longhorns are looking to successfully defend their individual titles from a year ago as well.

Texas won seven women's individual titles and five of those Longhorns are back. The women also won the 4x100 relay. The men claimed five individual titles in 2014 and they all return this year, plus another former Big 12 champion who redshirted last year.

A title for the Texas men would be their six Big 12 outdoor crown to join Nebraska for the all-time lead. The women already lead the Big 12 with eight outdoor titles.

Fans can keep up with the action online with a live webcast provided at big12sports.com. Live results will be provided at deltatiming.com as well. Updates, results, notes and more will be available on Twitter by following @UTexasTrack and @Big12Conference. Fans are encouraged to keep up and interact with the meet by following and using the hashtag #Big12TF. Tickets are available for $10 for adults and $5 for youth at the gate each day of the meet.

Events to Watch
•     Men's 100m: Baylor's Trayvon Bromell is ranked No. 2 in the NCAA. TCU's Ronnie Baker is No. 6 and Senoj-Jay Givans of Texas is No. 13. If the indoor 60m final was an indication of how close these runners are, this event has potential to be one of the best finishes.
•     Women's 100m & 200m: Texas can score tons of points in these two events. The Longhorns hold 4 of the top 6 times in the 100 and 4 of top 7 in the 200. These events will could be an opportunity to Texas to make a big move and create space from the rest of the field in scoring.
•     Men's & Women's Pole Vault: Both pole vault competitions on paper have the potential to be major point grabs for Texas. The women boast 5 of the top 11 in the conference while the men have 4 of the top 9.
•     Men's Throwing Events: Texas won 3 of the 4 throwing titles last year with the winners all returning this year, as well as another former champion in the discus. Can Texas show dominance in the field events again this year?
•     Men's 10,000m: Texas has never won a Big 12 title in this event and senior Craig Lutz enters ranked No. 1 in the league. Some schools have not run their top athletes in this event yet, which could add to the drama as Texas currently holds 4 of the top 5 times.
•     Women's 400m: Courtney Okolo broke the collegiate record at this meet last year at 50.03. She ran 51.36 in her outdoor opener last year. This season she ran 50.99 in her first outdoor 400. Add 2x NCAA champ Ashley Spencer into the mix, and Texas is a force.
•    Decathlon: Wolf Mahler won the heptathlon indoors for the men and went on to be a first team All-American. He finished 3rd in the decathlon last year at this meet. Can he pull of the sweep or can he and teammate Johannes Hock (2013 NCAA champion) finish 1-2 for the Longhorns and grab 18 valuable points?

Standard Bearers
•  Texas currently holds seven collegiate records combined among the men and women. The nearest competitor is Arizona and Colorado with five.

2015 The Bowerman Watch List
The most prestigious award in collegiate track and field, The Bowerman, is awarded by the USTFCCCA annually to the top male and female track and field star annually. Since its inception in 2009, the winners combined to win three Olympic medals in 2012.
•  3-time NCAA champion Ryan Crouser is on the men's May watch list.
•  NCAA outdoor 400m champ Courtney Okolo is on the women's May watch list.
•  Okolo was a finalist for the 2014 award after breaking the collegiate record in the 400.

25 Longhorns Named Academic All-Big 12
•  Texas had 25 members on the 2015 Academic All-Big 12 Track & Field Teams.
•  10 men were named to the first team, the most in school history and the most in the league this year among the men's teams
•  Blake Jakobsson and Megan Siebert both were recognized for the fourth time in their careers.

Texas Eyes 100th Big 12 Postseason Title
•  Texas has 99 combined Big 12 Conference postseason titles after 5 wins already in 2014-15.
•  A win this weekend by either Men's or Women's Track & Field or Women's Rowing would get Texas to the century mark.