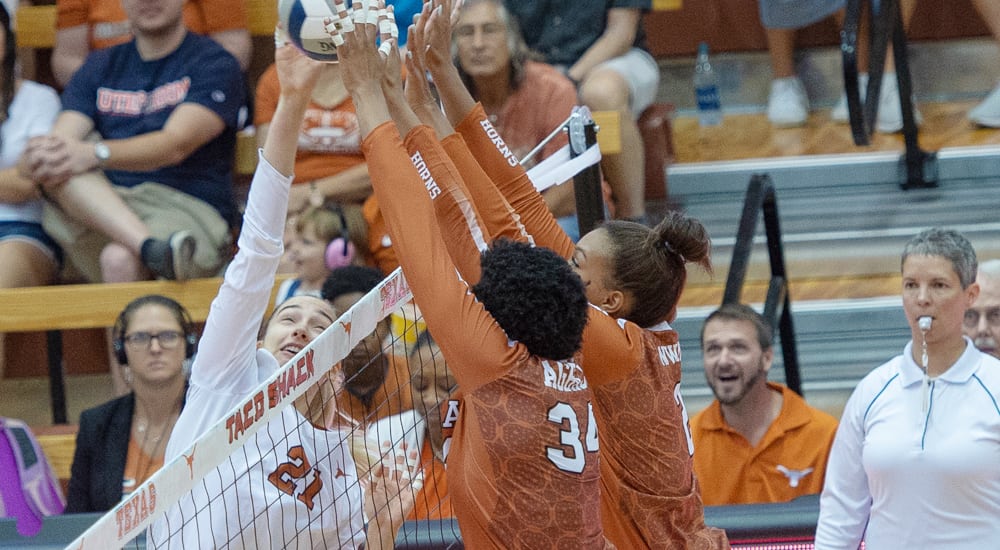 Freshman outside hitter Katarina Luketic (21) and the White team defeated the Orange in three straight sets as the Texas volleyball team tipped off its 2018 season with its annual Orange-White Scrimmage (photo by Jose Mendez / Horns Illustrated).

AUSTIN, Texas — The Texas volleyball team perennially sets the bar high for excellence on the 40 Acres, with a continuing streak of 184 straight weeks within the AVCA top 10 and five consecutive seasons Elite Eight or better appearances in the NCAA tournament.

Fans got their first glance at the 2018 team Saturday at the annual Orange-White Scrimmage at Gregory Gym. For the record, the White team defeated the Orange, 25-13, 25-21, 25-23, in a predetermined three-set exhibition, with the practice game considerably more fun for the players than just about every one of the Longhorns’ survival-of-the-fittest daily workouts.

Texas, ranked third in the AVCA preseason poll behind Stanford and Nebraska, was 27-3 last year. The Longhorns will open the regular season Aug. 24-25 at the VERT Challenge in Lincoln, Nebraska, facing No. 18 Oregon and No. 7 Florida, respectively, on Friday and Saturday.

Ten players return from the squad that lost to Stanford in the Regional final in Palo Alto, California, with preseason Big 12 player of the year Micaya White, powerful outside hitter Bedart-Ghani, middle blocker Morgan Johnson and setter Ashley Shook leading the squad. White was not suited up for the Saturday’s scrimmage.

While this group of Longhorns might not be the flashiest that Texas has sent to the court, its togetherness is what is expected to make the team excel. UT head coach Jerritt Elliott stressed on-court communication and the execution of systems the team has worked on in practice for the scrimmage, and he said he came away pleased with his team’s effort.

“I like the way the team is gelling and the leadership we have with Yazzie (Bedart-Ghani) and Morgan (Johnson),” Elliott said. “The team has really worked hard this summer. I like what we have — we are a solid team. We are good and solid in every position.”

Former Texas standouts Juliann (Faucette) Johnson and Ebony Nwanebu returned to campus for the exhibition and played for the Orange team.

The Longhorns begin the season with a streak of rankings in the AVCA Top 25 for 189 consecutive weeks dating back to 2004. Texas has appeared in the top four of the preseason poll for 13 straight seasons.

Eggleston's and White's preseason are the 11th in Texas history for each category.

White is one of three players on the preseason Big 12 team who was a unanimous choice. She returns to Texas as a two-time All-America. She was named Big 12 Freshman of the Year in 2016 and is a two-time All-Big 12 selection.

Eggleston is the most ballyhooed member of the six-player freshman class for the Longhorns, which includes middle blocker Brionne Butler, who opted to redshirt last season.

Eggleston joined the Longhorns after bypassing her senior year of high school and said Friday that there is a great chemistry amongst the team.

Of the seven teams the Longhorns will face in their non-conference schedule, six competed the 2017 NCAA Tournament, including two  — Florida and Stanford — that reached the Final Four.

Four of Texas’ early-season opponents are in the preseason top 10: No. 1 Stanford, No. 6 Kentucky, No. 7 Florida, and No. 9 Wisconsin. Oregon also is ranked, at No. 18. The tough pre-conference schedule are part of Elliott’s plan to make sure the Longhorns have a top-four RPI when the regular season ends.

“This is the toughest schedule we’ve had here in our 18 years,” Elliott said. “There are no easy matches for us, and we’ve got to be sure we come out and play well every match. It would be nice to go unscathed through our non-conference games, but I assume we are going to take some losses. We will know what we need to work on very quickly.”