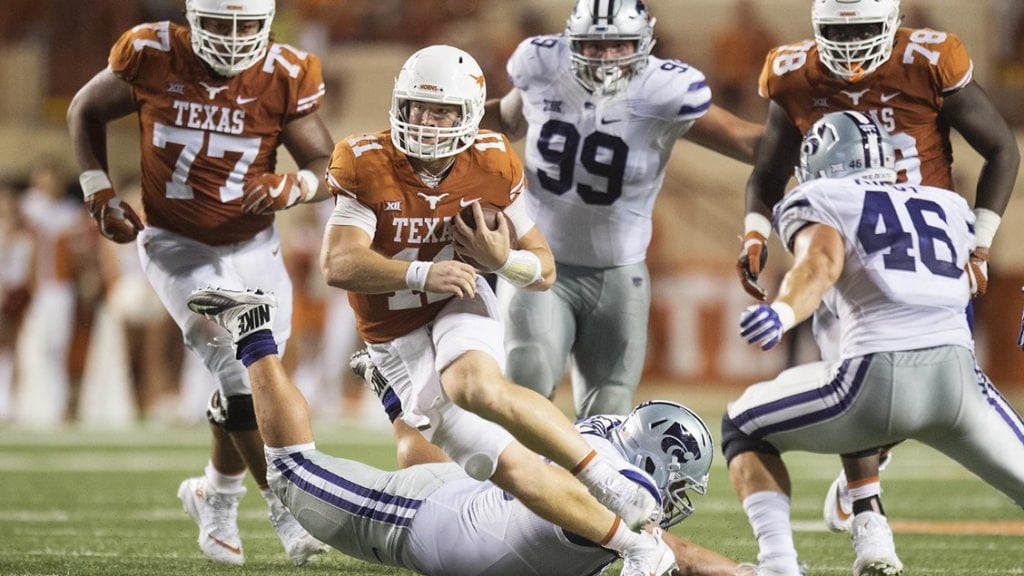 SAM EHLINGER BEGINS THE SEASON AS THE STARTER

Shane Buechele started last year's game against Maryland and he played well against a defense not known for shutting opponents down. Buechele racked up 375 yards, 2 TD  and 1 Int. in a losing effort.

This year, a different quarterback will be making the start.

After announcing Ehlinger as the starter, coach Herman gave praise toward both quarterbacks.

“Sam is throwing the ball a lot better. He’s sitting in the pocket much more comfortably. Let’s make no mistake, Shane Buechele had a great camp, great camp. He really didn’t do anything wrong," Herman said.

Herman hopes either of his QBs could win Texas a game, yet it was some of the subtle things that led to Ehlinger getting tabbed as the starter in the season opener.

"I just feel like there’s a lot of years of coaching experience on our staff, and neither of them did anything to justify saying, ‘you can’t win with that guy,'" Herman said. "It was just a matter of who do we feel gives us the best chance to win in the first game, and we’ll see if we’re right.”

In last year's game against this same Maryland team, the Longhorns defense was cut to pieces by a Terrapins rushing attack that racked up 263 yards. The Maryland offense boasts a pair of athletic quarterbacks (Kasim Hill and Tyrrell Pigrome) and an explosive running back (Ty Johnson) with a 7.5 yards per carry career average.

Simply put, this is the same team that ran all over a Texas defense last year, racking up 51 points on their way to a Week 1 upset over the Longhorns.

"Last year they established the run and had a good amount of yards. That's not something we're proud of," linebacker Gary Johnson said. "But we've been emphasizing it since then. After that game we have been instilling in one another to stop the run. Every day at practice and leading up to every game, we just have to stop the run."

TEXAS WANTS TO RUN THE BALL

Last year was a tough one for the Texas rushing attack.

They ended the year averaging 3.5 yards per carry and as the 110th ranked rushing offense. For Tom Herman to be successful in his second year, the Horns will need a balanced attack.

This does not mean they need to dominate on the ground (although that would be nice), but improving drastically is necessary for this Texas team to be a contender. Against the Terps a season ago, they ran for only 98 yards on 31 carries. That won't get the job done.

This year the team looks to Tre Watson, Daniel Young and Keontay Ingram to get the ground game going strong at the start of the season. Texas should see some improvement from a year ago thanks to year in this system and the continuity along the line.

Ehlinger is also tough to bring down. Naming him as the starter not only solidifies the passing attack, but it will also help with the teams rushing attack as the shifty QB hones his ability on when to go and capitalize on the ground.

"I think that's something that I've grown in tremendously since the spring is understanding the situation, understanding what situations it's OK to throw the ball away," Ehlinger said, "(and) when it's okay to punt and maintain field position. Or maybe what situation it isn't and we have to have this first down."

There's a certain confidence coursing through the Longhorns that appears to be growing by the day.

"It all starts with confidence. We know what we are capable of doing," Johnson said. "Last year we got our feet wet with the offense but maybe were scared to try certain things. Getting that confidence and offensive swagger, the defense isn't the only side who can do that. You can play offense with confidence too. That's what Coach Beck tells us all the time."

The same was to be said on the other side of the ball, as defensive back Kris Boyd agreed that the familiarity in the system, with each other and the goals ahead of them is breeding boundless confidence for the Horns.

"We know what we are doing now," Boyd said. "Everything was new to us. We were out there getting our feet wet, but we are more comfortable. We've got an idea of who we are playing with, knowing the plays and the coaching staff.

THE TERRAPINS ENTER THE SEASON IN COACHING TURMOIL

Matt Canada, who was recently hired as the program’s offensive coordinator, will serve as the interim head coach for Maryland this season. This decision was made on the heels of a very tough, controversial summer in which coach D.J. Durkin was placed on administrative leave following the sad and unfortunate circumstances in the death of Maryland player Jordan McNair, who collapsed during practice and tragically passed away due to complications related to extreme exhaustion and heatstroke.

There's no doubt the tragedy will be on everyone's mind, and McNair will be close to player's hearts on both sidelines. Once the game gets going, there's no telling how these young men will respond and react, but the bonds built on both sides of the ball by both squads will surely be on full display come Saturday.