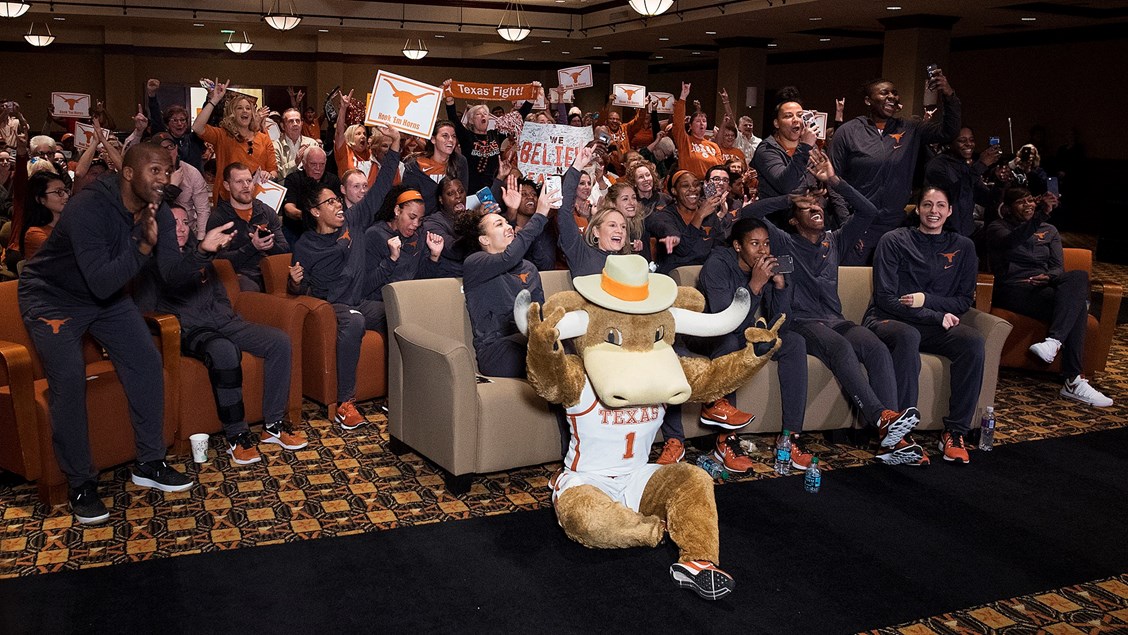 The Texas women's basketball team will host the first two rounds of the NCAA Women's Basketball Championship at the Frank Erwin Center (photo courtesy of texassports.com).

The University of Texas women's basketball team has earned the No. 2 seed in the Kansas City Regional and will begin NCAA Tournament play at home this week, playing host to the NCAA first and second rounds at the Frank Erwin Center.

The second-seeded Longhorns will be joined in Austin by seventh-seeded Arizona State, 10th-seeded Nebraska and 15th-seeded Maine. Texas will open its NCAA quest Saturday by playing host to 15th-seeded Maine at 5 p.m. CT on ESPN2.

Texas is making its 31st all-time appearance in the NCAA tournament, which ranks fourth among all NCAA Div. I programs. The Longhorns hold an all-time NCAA tournament record of 40-29 (.580). UT is hosting the NCAA first and second rounds for the third consecutive year and eighth time since 1997. Texas is 23-9 (.719) all-time in NCAA tournament games played at home.

Texas is a No. 2 seed for the sixth time in program history and holds a record of 13-5 (.722) all-time when competing in the NCAA tournament as a No. 2 seed.

Texas has posted its fifth consecutive 20-win season and has a 26-6 record overall. The Longhorns tied the school record for most Big 12 Conference wins in a single season with 15, finishing second in league play for the third consecutive season.

Texas has five wins in 10 games this season against Associated Press top 25 opponents.

On what it means for her team to be making its fifth consecutive NCAA Tournament appearance:
"It means a lot. We talked earlier before we came up here that you should never take it for granted. I talked to the players a little bit about how fun it was to watch the guys celebrate yesterday. It's always somebody's first time to go through the bracket. I said that to them before we walked up here. It's some people's first time and some people's last, so you should always appreciate it and celebrate it."

On what is different about NCAA Tournament play:
"It's one-and-done. That's the thing that you have on your mind during preparation. You don't talk about it a lot because you don't want your seniors to get to emotional or worry about it too much. You just have one game left if you don't win and you start to get a little more urgency. It flips the page as far as taking a breath of fresh air because you're playing against teams that aren't as familiar as the teams in your conference are. It gives you a new life. I think that's everybody. You just feel like you have a new life."

On both Oklahoma and Oklahoma State making the NCAA Tournament field:
"I was very excited about that. There was a lot of conversation about how many Big 12 teams would get in. I think if you look at those two teams, you don't just look at where they finished in the conference, you also have to look at their body of work and you have to look at their non- conference schedule and their strength of schedule. If you were to ask the committee, I think they would say that strength of schedule was a big factor for some of these teams."

On her thoughts on the Kansas City regional:
"It's hard to look ahead. You saw some teams last year get upset — on their home courts while they were hosting — and we were close to that. I think it's really important that we stay in the moment. I would say the most exciting part about being in the Kansas City region is that if we were to make it to the regional, the fact that the fans could drive and also the families of the players and all of the coaches. It's a situation where it's a drive-able trip. I wouldn't say the cheering was as much about who was in the region but more of where it was.

On how she gets her players to stay in the moment:
"If you look at the trend of this particular team, we've had certain situations that didn't go our way and they've done an unbelievable job of staying in the moment. We've had setbacks and we've had really good performances that I thought that the leadership on this team has shown through every time because they've just gone on to the next game. I thought it was a reflection on how we felt about taking it one game at a time in the conference tournament. Last year we got ahead of ourselves and lost in the semis. Even though we fell short in the final, just the fact that we took it one game at a time in that tournament and really performed really well. Our leadership is good; I don't think they'll let that happen."

On if her team can play with the same mentality in the NCAA Tournament as it did in the Big 12 tournament:
"I think if you look at the tournament, we took one game at a time. I have to go back to that because that sort of tells you if a team is on a trend of downward spiral — are they tired of playing? I thought we didn't look tired of playing or competing, so when you look at just taking it one game at a time, I think they will be able to do that. The good thing about all of the teams that we've played, even the last two losses that we've had — even to Baylor — when you look at that and you look at the UConn loss, you're looking at some of the best teams in the country that we have been toe-to-toe with. I don't think there will be anybody that we'll be intimidated by or anyone that they'll say OK we just can't compete with them. I think they understand there's another level of execution that has to happen and another level of discipline but I think all of these experiences have been good for them. I think that if we stay in the moment, we can be successful."

On what it means to her that Texas is hosting for the third consecutive year:
"It means a lot. Our fans are an ecstatic crowd; they're always there for us no matter what goes down during the season, so I think it's really huge that they get another chance to watch us play and that we get to be in front of them again"

On what it means to play in the NCAA tournament as a senior:
"It's definitely my last ride. I'm going to come out with everything I have - not to say I haven't in the past, but it's my last chance. For the young ones, this is their first tournament, and for some of them, their second or third. It has nothing to do with being a senior, it's all about the team and focusing on getting us where we need to be. It's all about the journey."

On her team making its fifth consecutive NCAA tournament appearance:
"I consider us blessed because there aren't a lot of people that have the opportunity to do this, so I'm very excited"

On if she looks ahead down the tournament path:
"No, it's one game at a time and not looking past any teams. They're all good and you have to respect all of them the same."

On what's different about playing in the NCAA tournament:
"I would say mentality. We've had a really long season and most of our bodies are worn down. But when you have a strong mentality, it takes you a long way. We just have to stick together, play as hard as we can and play to the best of our ability."

On what makes this a special Texas team:
"We have a very talented team. Very versatile. It's not just one player, we have a team full of players who can basically do the same things."

On if it was frustrating to have to wait until the end to see Texas in the tournament field:
"It wasn't frustrating at all. As long as we see our name up there, we're happy."

On what Texas can improve upon entering the NCAA tournament:
"Our defense needs to get better. We need to buckle down for our posts. Rebounding and sticking to game plans. We have to keep getting better every single day."

On what emotion she feels about playing in her last NCAA tournament:
"I don't really know yet. I'm excited, I'm sad, but I'm just ready to play. There's going to be a lot of emotions, but that's my favorite part about playing. Excited that we get to play in front of our fans. It's going to be a great atmosphere."

On the advantages to playing the NCAA first and second rounds at home:
"Ours fans are like our sixth man. I've said it all year, our fans have been great, especially at the home games, but even on the road. We have a lot of fans come with us on the road. They give us energy and it's just a great atmosphere when everybody is into the game."