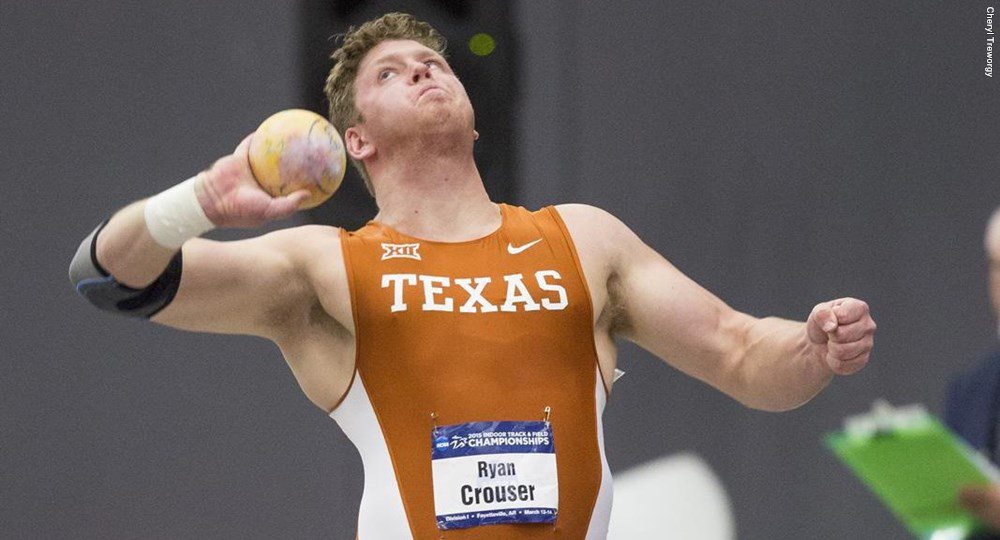 One of the elite University of Texas track athletes in recent years, Ryan Crouser now has been named 2016 NCAA Division I Male Indoor Field Scholar Athlete of the Year by the USTFCCCA (photo courtesy of texassports.com).

AUSTIN, Texas — When U.S. Track & Field and Cross Country Coaches Association (USTFCCCA) announced its All-Academic team and Scholar teams, 18 Texas Longhorns appeared on the lists, headlined by thrower Ryan Crouser, who was named 2016 NCAA Division I Male Indoor Field Scholar Athlete of the Year as the top field event star and student of the 2015-16 school year.

Crouser won his fourth NCAA title at the NCAA Indoor Championships and tied the college shot put record with a throw of 21.73 meters (71 feet, 3.5 inches) at the Big 12 Championship.

He graduated with his Master’s degree in finance in the spring with a GPA of 3.70. His combined GPA for his undergraduate and graduate degrees was 3.47.

To be eligible for team recognition, a team must earn a cumulative team GPA of 3.00 or higher. The Texas women boasted a team GPA of 3.21 this year.

Individuals must maintain a GPA of 3.25 or higher and have ranked among the top athletes in the nation in their respective event by either competing in any round of the NCAA Outdoor Championships or ranking in the top 96 nationally in an individual event or top 48 in a relay during the indoor season.