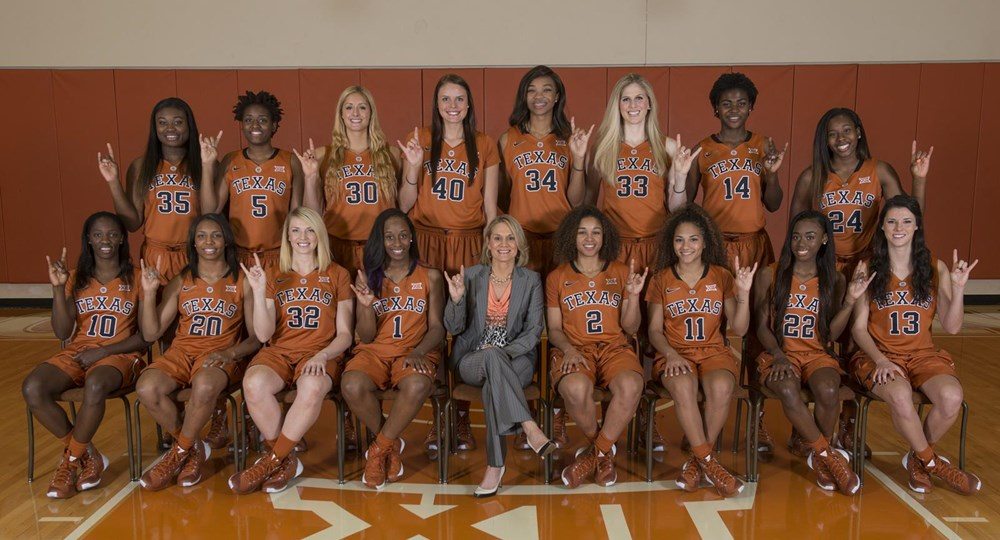 Four elite prospects signed with the University of Texas women's basketball team this week, giving the Longhorns a recruiting class that is ranked universally among the best in the nation (photo courtesy of texassports.com)

"What a great day it is for Texas basketball," UT head coach Karen Aston said. "I am ecstatic for the program and the fans that we are able to bring four quality young women to Texas … Each one brings something different to the table and, when you look at our team and the last few classes, what stands out is that we are now fitting together pieces of a puzzle that will create success for Texas.”

Holmes is the nation’s No. 1 recruit, according to Blue Star Report, and the No. 2 player in the espnW Hoop Gurlz Top 100. A versatile wing player, Holmes averaged 15.9 points, 7.6 rebounds and 3.0 assists per game last season as a junior at Cedar Hill High School. She earned first-team all-district honors, all-region and all-state, third-team All-America (by MaxPreps) and averaged 10.6 points and 5.7 points per game for Team USA’s gold medal-winning Under-17 world championship team. She also was a sprinter and jumper on her high school track team.

Aston said Joyner could have an immediate impact — on the court and on the recruiting trail.

“She has the potential to change the game for Texas and make her mark on our program,” Aston said. “She is one of the most versatile players I have ever seen in all my years of recruiting. What is so fascinating to watch is her ability to affect a game in so many ways. This summer, she was able to show that she had increased her range, and was able to handle the ball like a point-forward. Joyner is the kind of player that not only impacts our team immediately but also our recruiting, because other great players want to play with her.”

The nation's No. 6 prospect — and No. 2 point guard — according to the espnW Hoop Gurlz Top 100, Sutton is a true point guard who averaged 16.1 points, 5.5 rebounds, 4.0 assists and 2.3 steals per game as a junior at Parkway North High School in St. Louis, leading her team to a 25-6 record and a third-place finish in the school’s first Class 5 state tournament. A two-time Suburban South Conference Player of the Year and two-time first-team all-state honoree, Sutton led the Missouri Phenom to championships at the Super 64 Tournament in Frisco, Texas and the adidas Nationals in Atlanta.

“(Sutton’s) ability to distribute the basketball is second to none, and I truly believe she is the best true point guard in this class,” Aston said. “We were so fortunate that ‘Sug’ came to campus two years ago to our camp, and our players and staff just fell in love with her. She has an infectious personality that makes people want to play with her. The fans will love watching her manage games and her ability to decide what is the right play for our team. Not only can she pick defenses apart but she also can hit the open shot, which will make her a difficult matchup.”

The 18th-ranked wing player in the nation according to ESPN.com, Underwood averaged 24.3 points and 13.2 rebounds per game — each of which was the best average among Dallas-Fort Worth players — through 11 games in her junior season before suffering a season-ending anterior cruciate ligament (ACL) injury.

“Jada Underwood will be the player that is probably the least-talked about, but could make as big of an impact on our program as anyone,” Aston said. “I love the way that Jada plays the game — she has a passion for it, and plays with purpose. Our staff saw her at a very young age and has watched her grow and mature, but most of all, fight adversity with the injury and come back looking better. Jada also is extremely versatile and can realistically play three to four positions due to her size and strength."

A sophomore at Gulf Coast (Fla.) Community College, Caron-Goudreau is the nation's No. 6 overall junior college prospect according to Dan Olson's Collegiate Girls Basketball Report. She played in 27 games — starting 16 — for Vanderbilt last season, averaging 4.6 points and 4.1 rebounds per game for the Commodores as a freshman. She also played for Canada’s Senior B Women’s National Team.

"I am so excited to finally be able to say that Audrey will be a Longhorn,” Aston said. “We have had a long wait on this one and are so thrilled that she decided to come to Texas. It has been a unique journey for her, but I do believe it has made her an even better player and more mature person. Audrey, just like her sister Khalé, will bring an enormous competitive spirit to Texas. I can't say enough about how hard she competes and how serious she is about winning. Audrey also adds another versatile player for us in the post and complements the players we have on our team now and this class.”