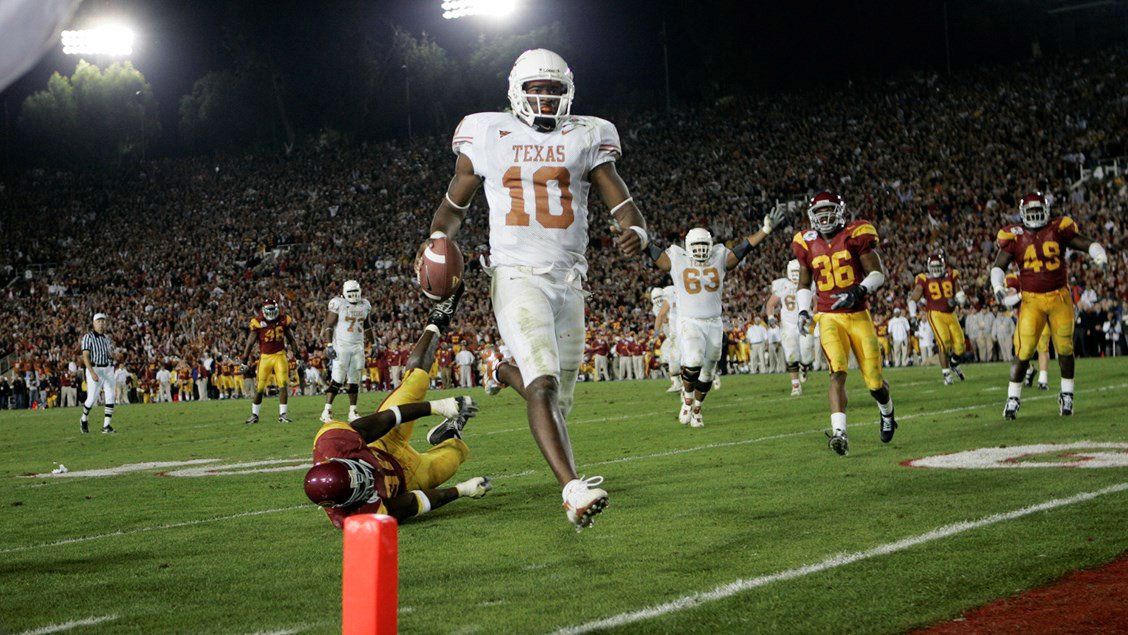 One of just six players to have his number retired by the University of Texas, former UT quarterback Vince Young is one of 15 who will be enshrined in December in the College Football Hall of Fame (photo courtesy of texassports.com).

Former Texas quarterback Vince Young is among 15 former players and coaches named to the 2019 class of inductees to the College Football Hall of Fame, the National Football Foundation announced. The class will be enshrined Dec. 10 in New York.

“I’m truly blessed and grateful to be selected to this year’s class of the College Football Hall of Fame,” Young said. “When I think about it, the honor is meaningful in so many ways and this award is full of reminders. It’s a reminder that I came from a broken home and an under-resourced community where the odds are against us all. It's a reminder that I was given the chance to play for the University of Texas through the support of my family, hard work and dedication. It’s a reminder of the work my teammates and I put in, especially when no one was watching. It’s a reminder of all the adversity we have gone through and overcome, and last, but not least, it’s a reminder of all the awards, challenges and championships my brothers and mentors have won together. None of us have accomplished anything alone, and I'm thankful for everyone in my life. This honor means the world to me and my family, and as I think about it, two powerful words say it all: life-changing.”

Young was the runner-up for the 2005 Heisman Trophy behind USC running back Reggie Bush, but was a consensus first-team All-America honoree and won the Davey O’Brien Award and the Maxwell Award. He also was named first-team All-Big 12 and was the conference’s Player of the Year after guiding UT to a 13-0 record to win the conference title before beating USC in the 2006 Rose Bowl, in which he was named the game’s Most Valuable Player. He also became the first player in Football Bowl Subdivision (FBS) history to throw for more than 3,000 yards and run for more than 1,000 in the same season.

Young amassed more victories than any quarterback in UT history, posting a 30-2 record as a starter, including 20 straight victories at the end of his career.

Young finished his career with 3,127 rushing yards and 37 touchdowns, each of which is a record for Texas quarterbacks, and stand fifth and fourth, respectively, among all Longhorn rushers. He also left Texas as the career leader in total offense (9,167 yards) and touchdownsresponsible for with 81, and still stands second behind only Colt McCoy.

“I watched in awe as Vince Young revolutionized the dual-threat quarterback position with his power and speed as a runner and his accuracy as a thrower," Texas head coach Tom Herman said. "When you look back at what he accomplished and the numbers he produced week after week, they were truly amazing, and, you'll be hard-pressed to ever see anyone turn in a better performance than what he did in the national championship game against USC. We’re thrilled to see him going into the College Football Hall of Fame and so lucky to have him as a Longhorn Legend.”

Young guided the Longhorns to two other bowl games. As a sophomore, earning MVP honors in UT’s victory over Michigan in the 2005 Rose Bowl, setting himself up to be only the fourth player to earn the honor in each of two Rose Bowls.

"It goes without saying that Vince was an unbelievable football player who greatly impacted college football and the University of Texas," Brown said. "He was a once-in-a-generation talent. But what I'll always appreciate more than anything with Vince is how he led our team, the way he worked, his passion and drive, how he made his teammates better and pushed us as coaches, and the way he represented our program. He's a great football player and an even better person. I'm so excited to see him going into the College Football Hall of Fame. It's a very special club that I was humbled and honored to join last year. There's no one more deserving, and I'm excited to be able to help welcome him in with this year's class."

Young was drafted third overall by the Tennessee Titans in 2006, earning NFL Rookie of the Year honors after taking over as the starting quarterback in Week 4 and leading the Titans to an 8-5 record. He earned a spot in the Pro Bowl, becoming the first rookie quarterback ever to play in that game.

Young followed up his rookie year by leading the Titans to a playoff berth in 2007. A member of the Longhorn Hall of Honor, his No. 10 jersey is one of only six retired by Texas, and he is enshrined in the Rose Bowl, State of Texas Sports and Texas High School Football halls of fame.